Are COVID-19 Tests Sterilized With a Chemical Linked to Cancer?

Expected 2020 federal limitations on ethylene oxide emissions were paused in response to the pandemic. 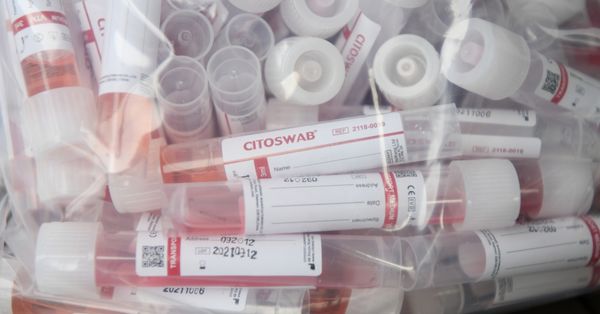 Claim:
COVID-19 diagnostic tests are sterilized with a substance called ethylene oxide (EtO), which has been linked to cancer.
Rating:

EtO is used in gaseous form to sterilize roughly half of all medical equipment manufactured in the U.S., including at least some nasal swabs used in diagnostic tests used to detect COVID-19. It is true that the chemical itself has been linked to cancer and other adverse health effects, specifically by exposure resulting from inhaling emissions from industrial facilities. However ...

Health experts told Snopes that it is false to say that COVID-19 tests sterilized with EtO can cause cancer. According to the U.S. Food and Drug Administration (FDA), medical equipment sterilized with EtO must meet recognized standards to ensure that levels of ethylene oxide on such equipment remain within safe limits. The FDA regards the use of EtO as a "safe and effective" method of sterilization.

While much of the world pressed on with the distribution of COVID-19 vaccinations in April 2021, testing for the disease had decreased drastically -- in the U.S., for example, from a peak of 2.29 million a day on Jan. 6 to just under 750,000 a day less than two months later. Amid copious misinformation surrounding the vaccine, a new claim targeting the safety of the COVID-19 diagnostic test took off in early April.

Misinformation memes and fringe websites like Truth Unmuted blurred the line between fact and fiction when they reported that tests used to diagnose the upper respiratory disease contain ethylene oxide (EtO), a chemical that has been linked to cancers like leukemia and lymphoma: As is often the case with these sorts of claims, there are kernels of truth hidden in this popcorn bag of lies. It is true that EtO has been linked to cancer, and it is true that EtO is used to sanitize as much as half of the medical equipment in the U.S., from catheters to bandages. However, the U.S. Food and Drug Administration (FDA) told Snopes that for medical equipment sanitized with EtO, internationally agreed-upon standards require that the levels used to be low enough so as not to cause adverse health effects.

After obtaining a photograph of a polymerase chain reaction (PCR) test (albeit one used to diagnose chlamydia, not COVID-19) that noted on its packaging that it had been sterilized with EtO, we asked the FDA if that means ethylene oxide was used to sterilize that (and potentially other) COVID-19 tests. A spokesperson replied:

It’s important to distinguish the test from the collection swab. The use of sterilized swabs for collection is not the use of EtO in the test itself...

The FDA did not directly respond to our questions as to whether COVID-19 diagnostic tests specifically — PCR or otherwise — are sterilized using EtO. This would include any part of a test kit that is sterilized with an EtO before it is administered to a patient, such as a container used for holding the viral media, the biohazard bag, or most importantly, any part of the test kit that comes into direct contact with a patient, such as nasopharyngeal/oropharyngeal swabs or anterior/mid-turbinate nasal swabs.

However, we were able to obtain a photograph of two COVID-19 tests commonly used at a testing facility in Montana that were each marked as sterilized using EtO. The top swab is used in a PCR test and the bottom one is used in rapid tests. (It is important to note that clinician guidelines obtained by Snopes highlight that COVID-19 tests are not approved by the FDA but have been authorized under an emergency use authorization.) Ethylene oxide is a colorless, odorless gas most commonly used in the production of industrial chemicals, but also as a fumigant in certain agricultural products and a sterilant for medical equipment and supplies

“Human and animal studies consistently show that EtO can be hazardous to human health. Short-term exposures to EtO can cause respiratory irritation and lung injury, shortness of breath, headache, nausea, vomiting, and diarrhea,” wrote the U.S. Department of Labor Occupational Safety and Health Administration (OSHA) in a 2009 report. “Long-term exposure over many years may cause cancer, reproductive effects, genetic changes, and damage to the nervous system.”

But dangerous exposure is most often through breathing in emissions from the industrial setting and cigarette smoke — not via exposure to medical equipment. That’s because exposure through medical equipment is highly regulated and occurs at levels deemed safe for human contact.

Regarding COVID-19 tests, Lauren-Jei McCarthy, a spokesperson for the FDA, told Snopes that the agency has no information to indicate that EtO is "used in" PCR or other COVID-19 tests. Polymerase chain reaction tests are used to detect genetic material from an organism, like a bacteria or virus. It’s how healthcare providers are able to determine if a person is infected with a disease, like COVID-19 or chlamydia. Typically, a sample is collected using a swab to gather respiratory material in the nose and then sent to the lab to be extracted and isolated, according to Cleveland Clinic. (Though the FDA said it does not know of PCR tests that use EtO for sanitization, some swabs in Canada may be sterilized using EtO.)

“Ethylene oxide is a commonly used method of medical device sterilization. It’s considered a safe and effective method that helps ensure the safety of medical devices and helps deliver quality patient care,” said McCarthy. “Before most sterile medical devices are on the market, the FDA reviews premarket submissions to determine if the sterility information.” A small sample of condensed ethylene oxide in a test tube. Public Domain

Medical devices are sanitized in a variety of ways, from dry heat and radiation to the vaporization of hydrogen peroxide and EtO. But when it comes to certain plastics, metals, or glass devices that have multiple layers of packaging or hard-to-reach places (like catheters), the FDA notes that EtO may be the only viable method. In fact, half of all sterile medical devices are sterilized with EO, but manufacturers are required to sterilize their devices in accordance with internationally agreed-upon voluntary consensus standards that describe how to develop, validate, and control EtO sterilization processes and establish acceptable levels of residual EtO left on a device.

“These standards help ensure levels of ethylene oxide on medical devices are within safe limits since long-term and occupational exposure to ethylene oxide has been linked to cancer,” wrote the agency, adding that if a medical device manufacturer changes the method, the company is required to submit documentation so that the agency may review changes and determine if standards are still being met.

Those standards are put in place largely in response to studies that have linked cancers like lymphoma and leukemia, as well as stomach and breast cancers, to exposure to emissions from sterilizing facilities — not medical grade equipment, according to the National Cancer Institute. And because of dangerous exposure occurs through the environment, regulatory action for EtO falls on the U.S. Environmental Protection Agency (EPA) to monitor sterilization facility emissions. Under the Clean Air Act, EtO is considered a “hazardous air pollutant,” and the agency was set to issue a rule limiting emissions from commercial plants in 2020 but plans were put on pause until 2021, in response to a growing need for medical-grade equipment and its sanitization due to the COVID-19 pandemic.

In 2018, an EPA report found that 109 census areas had higher cancer risk in large part due to their proximity to facilities that emitted EtO. A 2019 resolution put forth before the American Medical Association’s Board of Trustees urged doctors to push for substitutes to EtO sterilization, and new federal rules were proposed that same year to further limit allowable limits of emissions, but the medical device industries pushed back, citing harm to patients and the medical supply chain if EtO were to be restricted.

It is not yet known when the EPA will revisit the rule. We will update the article accordingly.