Do Bats on 2020 U.S. Quarters Demonstrate a Government COVID-19 Plot?

Sometimes a bat is just a bat — even in American Samoa. 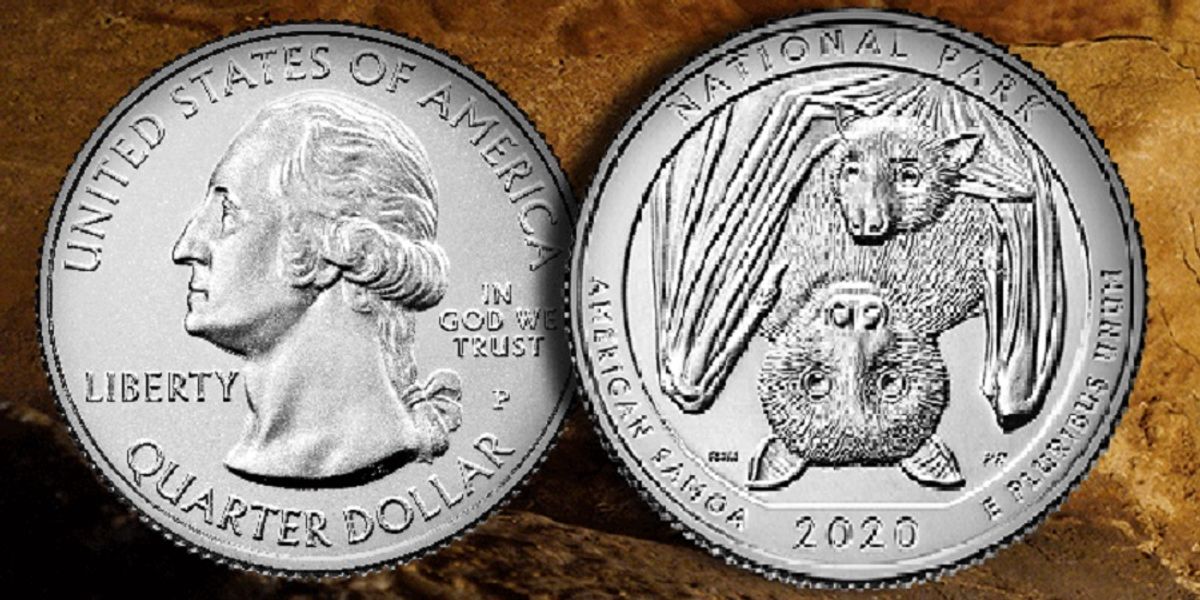 Previous Article
Next Article
Article 20 of 24 in Collection

Claim:
Bats are pictured on the reverse of a U.S. quarter issued in 2020, an indicator that COVID-19 is connected to a government plot.
Rating:

The reverse of a U.S. quarter issued in 2020 honoring the National Park of American Samoa features a pair of fruit bats.

Samoan fruit bats have no known connection to the novel coronavirus that causes COVID-19.

Many theories have been advanced to explain the origins of the novel COVID-19 coronavirus that emerged in Wuhan, China, in late 2019, ranging from the prosaic finding that it was merely a natural mutation to the conspiratorial claim that it was a bioweapon created in a Chinese laboratory. One much-discussed possibility was that the SARS-CoV-2 coronavirus originated in bats and made the jump from bats to humans through an intermediate species.

One of the more far-fetched conspiratorial takes on the coronavirus' origins held that the issuance of a new U.S. quarter in 2020 picturing bats on its reverse was a clue indicating that COVID-19 was "government made" as part of a plot to "kill the masses and start a new world": The coin in question is part of the America the Beautiful Quarters® Program. Authorized by Congress in 2008, the series features 56 quarters released in batches of five per year from 2010 through 2020 (with one additional release at the beginning of 2021), each depicting a national park or other national site in a U.S. state or territory:

The America the Beautiful Quarters® Program is authorized by Public Law 110-456 -- the America’s Beautiful National Parks Quarter Dollar Coin Act of 2008. The Act directs the Mint to design, mint, and issue quarter-dollar coins emblematic of a national park or other national site in each state, the District of Columbia, and the five U.S. territories. As stipulated by the Act, the Mint is issuing five new quarters per year until 2020 in the order in which each honored site was first established, with the final coin released in 2021.

The design of the reverse of the America the Beautiful Quarter representing American Samoa was announced in 2019, and the coin itself was issued in 2020. That design represents the National Park of American Samoa and depicts a Samoan fruit bat mother hanging in a tree with her pup:

National Park of American Samoa is located some 2,600 miles southwest of Hawaii and is one of the most remote in the U.S. National Park System. The site includes sections of three islands — Tutuila, Ta’ū, and Ofu. Almost all of the land area of these volcanic islands — from the mountaintops to the coast — is tropical rainforest. The park’s area totals 13,500 acres, 4,000 of which are underwater.

The obverse (heads) design features the familiar image of George Washington by John Flanagan, used on the quarter since 1932. It has been restored to bring out subtle details and the beauty of the original.

The reverse (tails) design depicts a Samoan fruit bat mother hanging in a tree with her pup. The image evokes the remarkable care and energy that this species puts into their offspring. The design is intended to promote awareness to the species’ threatened status due to habitat loss and commercial hunting. The National Park of American Samoa is the only park in the United States that is home to the Samoan fruit bat.

As far as this conspiracy theory goes, we would point out that the notion the novel coronavirus originated in bats is just one possible theory and remains unproven. And even if that were the case, it is exceedingly unlikely the virus started out in the Samoan fruit bat (Pteropus samoensis), which is found only in the Samoan archipelago and Fiji — far from the virus' apparent origin point in China. We also note the improbability that a government engaged in the furtive mass eradication of citizens would plan years in advance to plant subtle clues warning the public of the plot.

Previous Article
Next Article
Article 20 of 24 in Collection