Does a Picture Show a Divorcing Couple Dividing Up Beanie Babies?

The strangely moving photograph was shared on social media in April 2022. 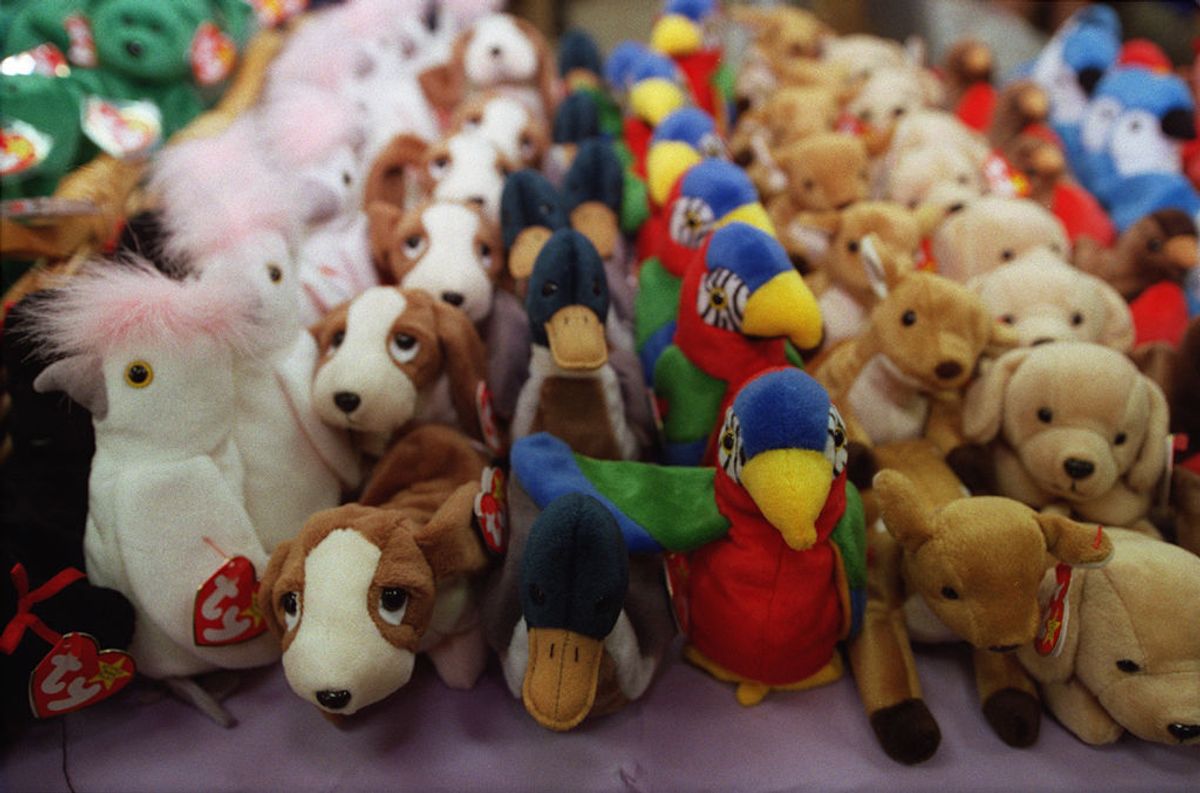 Claim:
A photograph shared widely in April 2022 showed a divorced couple dividing up their Beanie Babies on the floor of a courtroom.
Rating:

In April 2022, internet users shared an unusual old photograph along with a caption that read "A divorcing couple divide up their Beanie Baby collection in the court room, 1990s" (or words to that effect). The picture was authentic and unedited, and such descriptions were entirely accurate. Our rating is "True."

For example, one April 17 Facebook post included the picture, along with the caption "A divorcing couple dividing Beanie Babies in court, 1999": That is exactly what the strangely moving picture shows. It was captured by Reuters photographer Aaron Mayes on Nov. 5, 1999 at the Clark County Family Court in Las Vegas, Nevada. The original Reuters caption reads as follows:

Attorney Frank Totti looks over papers while his client Frances Mountain sorts out Beanie Babies with her ex-husband Harold Mountain in Judge Gerald Hardcastle's Family Courtroom in Las Vegas November 5. The couple, who were divorced four months ago, were ordered to divide up the collection valued at $2,500 to $5000 but were unable to do so by themselves. The collection was ordered spread on the court floor and divided up one by one under the supervision of Family Court Judge Hardcastle.

According to Clark County court records, the couple jointly filed for divorce in August 1998, one that Judge Gerald Hardcastle granted in May 1999. A Nov. 5, 1999 entry on the case docket notes "Return Hearing  (9:00 AM)...DIVISION OF BEANIE BABIES."

The Las Vegas Sun reported at the time that Hardcastle was intent on making an example of the erstwhile couple, due to their failure to resolve the distribution of the toys:

This morning, a frustrated Clark County Family Court judge ordered an erstwhile couple to divide up their collection of Beanie Babies one by one under his supervision in the courtroom. Maple the Bear was the first to go. "This isn't about toys. It's about control," Family Court Judge Gerald Hardcastle told the couple. "Because you folks can't solve it, it takes the services of a District Court judge, a bailiff and a court reporter."

...Frances and Harold Mountain divorced four months ago. According to the divorce decree, the parties were supposed to divide up their Beanie Baby collection, estimated to be worth between $2,500 and $5,000.

But the man and woman failed to split up their toys by themselves. The collection was still in Frances' possession Thursday when Hardcastle heard Harold's motion to get his share of the litter.

"I'd just had enough," said Hardcastle, who has been a Family Court judge for seven years. "We spend a lot of time dealing with some simply unreasonable issues. They are time-consuming, expensive issues. A lot of our calendar is made up of just this kind of nonsense. "So I told them to bring the Beanie Babies in, spread them out on the floor, and I'll have them pick one each until they're all gone." Hardcastle also invited reporters.