Counties Won vs. Popular Vote Does Not Signify Election Fraud

Counties are not a significant factor in U.S. presidential elections, but population density is. 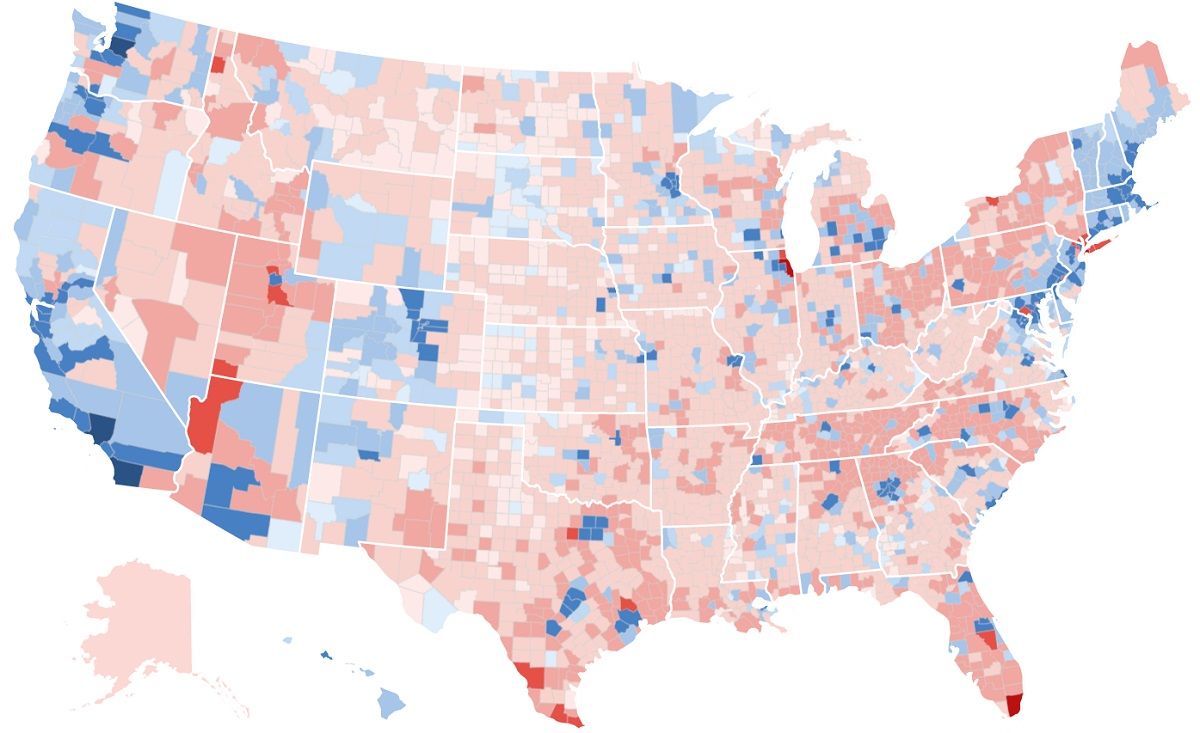 In the wake of the 2020 U.S. presidential election, U.S. President Donald Trump and his supporters fervently attempted to disclaim the reality that Trump had lost to Democratic challenger Joe Biden. One meme circulated in an attempt to cast doubt on the results questioned how Biden could have emerged victorious -- and garnered so many votes -- despite winning far fewer counties than Trump: The numbers vary depending upon the source (Associated Press estimated that Biden won 527 of the United States’ 3113 counties in 2020), but suffice it to say that Biden did indeed rack up several million more popular votes -- and 74 more electoral votes -- than Trump, despite winning far fewer counties.

How is this possible? The short answer is that because counties are geographic/administrative units that vary widely in area and population, they are largely irrelevant in national elections.

First of all, the number of voters residing within a county can range anywhere between several dozen and several million, as reflected in this U.S. Census Bureau chart of smallest and largest counties: More than half of all residents live in just 143 big counties (in terms of the number of residents), according to an analysis of U.S. Census Bureau county estimates. That means less than half of the population is spread out across the remaining 2,999 small counties.

This disparity in county size means that a candidate could theoretically win only 5% of the counties in the U.S. but still achieve a majority of the popular votes. And conversely, a candidate could win 95% of all counties in the U.S. but still come up short in a national vote tally. One candidate's winning just a single large county (such as Los Angeles or San Diego) by a decisive margin could offset losing several hundred other smaller counties elsewhere.

Moreover, the concept of "winning" a county (which we define as achieving a plurality of the votes) is also highly variable. A "win" could be anything from tallying 34% of the votes in a sparsely populated county to amassing 75% of the votes in a high-population county with several hundred thousand (or more) residents. Both of these scenarios count as "wins," but obviously the latter is much more significant from an overall vote standpoint.

On top of the relative insignificance of "number of counties won" as a metric, the general trend of late is that Democrats have fared much better than Republicans in smaller, densely-populated urban areas than in larger, sparsely-populated geographic areas, so it's not at all surprising (or suspect) that Democratic presidential candidates might tally many more popular votes from a lesser number of counties.

In essence, this claim is just a rehash of earlier flawed election comparisons that don't document any pattern of election or voting fraud, just a lack of awareness of demographic factors such as population density.