Counter-Demonstrators Didn't Have Permits in Charlottesville?

Counter-demonstrators had permits for two parks, while the "alt-right" was granted an injunction allowing them to use Emancipation Park. 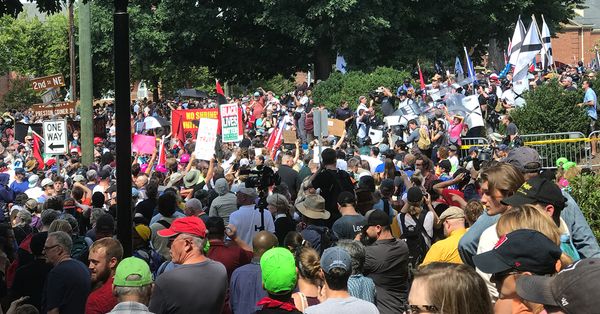 Claim:
Counter-demonstrators in Charlottesville did not have the appropriate permits to protest a white supremacist rally.
Rating:

On 15 August 2017, during a press conference at Trump Tower in New York City, President Donald Trump took questions from reporters about a deadly white supremacist rally in Charlottesville, Virginia the preceding weekend and said, erroneously, that counter-demonstrators did not have a permit.

One woman died on 12 August 2017 when, according to police, a white supremacist drove his car into a crowd of counter-demonstrators that had gathered to protest the "Unite the Right" rally. Two state police officers also died when the helicopter they were piloting while monitoring the unrest crashed. In laying blame on "many sides" for the carnage, President Trump told reporters:

Opponents to the "Unite the Right" rally on 12 August 2017 in fact did have permits, which were provided to us by the city of Charlottesville; they were allowed to be in nearby Justice and McGuffey parks from 9 A.M. until 7 P.M. Both parks are within a short walking distance to Emancipation Park, where the white supremacist rally was held. Counter-demonstration organizer Walter Heinecke told us:

It was a rally for racial justice, harmony, and end of white supremacy. I got the permits because at the [8 July 2017] KKK rally after the KKK had left, the police moved on counter-protesters really quickly and declared it an unlawful assembly, and then teargassed counter-protesters without giving them much of a chance to leave. So I got the permits with the understanding that the two parks were fairly close to Emancipation Park and were to be used as lawful assembly spots for counter-demonstrators.

On the other hand, the Unite the Right rally didn't have a city permit — they had a judge's order. According to documents provided by the city, organizer Jason Kessler applied for a permit on 30 May 2017 to hold the rally at Emancipation Park (which used to be called Lee Park), where a controversial statue of Confederate general Robert E. Lee has been the focal point of racial tensions. The city had tried to move that demonstration from Emancipation Park, which is the size of one city block downtown, to McIntire Park, which is larger and away from central Charlottesville. But Kessler sued, and a judge sided with him.

City spokeswoman Miriam Dickler explained by e-mail how the alt-right rally was allowed to go forward in its originally intended location:

The City agreed to issue the applicant for the “Unite the Right” rally a permit for McIntire Park rather than Emancipation Park.  The applicant chose to file a lawsuit to go to Emancipation instead.  The judge issued an injunction late Friday ordering the City to allow the event to take place in Emancipation Park.  This quick turnaround, and the court order, meant that a formal permit for the event was not issued.  The City did comply with the court’s direction.

Heinecke, a University of Virginia professor, told us that counter-demonstrators did not need a permit to protest the white supremacist rally at Emancipation Park because it is a public space:

If the president is referring to the counter-protesters at Emancipation Park on 12 August, he’s incorrect because the counter protesters are not required by law to have a permit to demonstrate against protesters.

As Dickler pointed out to the Washington Post, that is true — the public doesn't need a permit to enter the park or the sidewalks surrounding it even if an event is scheduled.

The night before the deadly events of 12 August 2017, tiki-torch carrying white supremacists held another chaotic, violent demonstration during which they were also confronted by counter-protesters. In this instance, no one had a permit because no permit was needed. University of Virginia spokesman Anthony de Bruyn told us in an e-mail:

The University does not require permits, registration, or approval to access public outdoor spaces. University policy speaks only to the ability to access and reserve University-owned facilities such as academic buildings and performance venues.

Counter-protesters did have a city permit for 12 August 2017 events. For the UVA "alt-right" rally the night before, no permits were needed and it was a judge's injunction on the night of 11 August 2017 that allowed the "Unite the Right" rally to be held the next day at Emancipation Park.