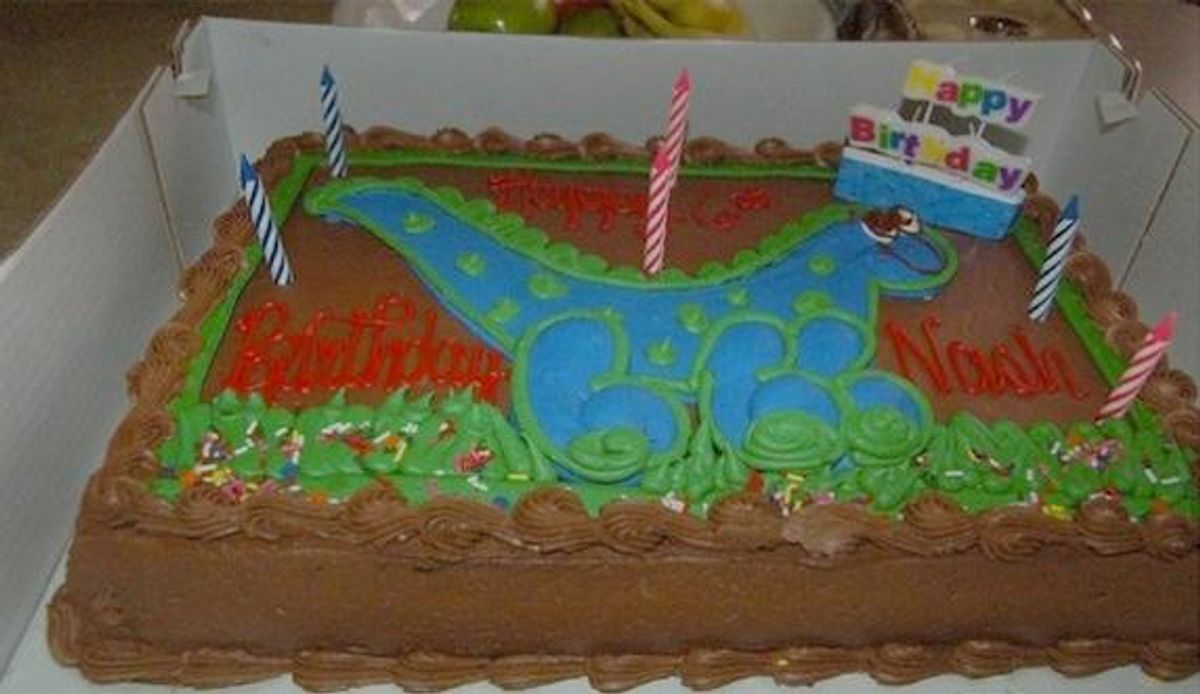 FACT CHECK: Did Costco remove a dinosaur cake from their online ordering system because a customer complained that it bore a hidden "demonic" symbol? Claim:   Costco removed a dinosaur cake design from their online ordering options because a customer complained that it bore a hidden "demonic" symbol?

A Facebook post supposedly shows a dinosaur cake purchased at Costco that has been removed because a customer complained that it contained satanic symbols. True or false?

Gimme some of that Devils food. Costco Pulls Dinosaur Cake After Satanism Complaint https://t.co/1eCPQvYbvo via @thedailymeal

Costco has pulled this dinosaur cake after a woman complained its feet looked like it said "666". #REALLY?- @Iam_Shem pic.twitter.com/byxiJwYM7A

Costco had to pull a dinosaur cake because people thought the legs looked like a "666" https://t.co/CMU0UZqwEO pic.twitter.com/eNeaX8h38S

Origins:  On 13 July 2015, the web site Inquisitr published an article titled "Costco Removes Dinosaur Cakes That Have ‘666’ on Them from Online Ordering System" which has now been deleted and replaced with a retraction. The now-deleted article reported a customer had complained that a dinosaur-themed sheet cake she had purchased from her local Costco warehouse outlet included a hidden "demonic" message:

Jessica Eckerdt of Queen Creek bought one of her kids a specialty birthday sheet cake from the Superstition Springs Costco in Mesa recently. While singing “Happy Birthday” to her son Nash, Eckerdt noticed that the cake had a hidden message written with the dinosaur’s legs. The three-legged dinosaur that was featured on the cake had “666” written out in blue and green icing.

“I was extremely shocked and upset to see a demonic symbol written clear as day on my six-year-old son’s birthday cake. What was supposed to be a whimsical dinosaur became something very distasteful. I was extremely surprised at Costco for allowing such an inappropriate joke be sold to an unsuspecting victim.”

Of course it could have been a coincidence that the legs appeared to look like sixes, but at the time the birthday cake was purchased, there were 666 total Costco stores spread across the globe.

The hyperlink on the word "time" in the above excerpt opens a link to a YouTube video dated 17 November 2014 and uploaded by an individual with the same name as the article's author (John Albrecht), described as follows:

Vicky Eckerdt of Queen Creek bought her grandson a specialty birthday cake from the Superstition Springs Costco in Mesa on Saturday. While singing "Happy Birthday" to her son Nash, Jessica Eckerdt noticed that the cake had a hidden message written in the dinosaur's legs. The three-legged dinosaur on the cake had "666" written out in blue and green icing.

A number of web sites aggregated the story from the original Inquisitr article without independently examining its veracity, including The Frisky, IJReview, Raw Story, and Addicting Info.

However, on 20 July 2015, The Desk reporter Matthew Keys published an article titled "How 'The Inquisitr' Was Duped Into Publishing a Fake Story on a Costco Birthday Cake" declaring the viral story to be "a hoax orchestrated by the reporter and his girlfriend." Keys noted that the story in question first appeared in 2014 (as supported by the dating of the YouTube clip linked above) and asserted that the "outraged mother" seen in the clip just happened to be the girlfriend of the story's author:

It was the kind of story that was made for the Internet: It spread like wildfire on Twitter and Facebook and was aggregated by news websites like the Independent Review, The Frisky and Raw Story.

It was also entirely made up.

The Costco in Mesa? A manager told The Desk by phone they have no records of a customer complaining about a birthday cake.

The customer at the center of the story? She is the reporter’s girlfriend.

Keys pointed to an earlier, identical story published by Albrecht in the Examiner in 2014, adding:

[T]he Inquisitr story did not contain a link back to [Albrecht's] earlier Examiner piece, something that would have been a violation of his freelance employment agreement with the [Inquisitr]. It did not contain a disclosure that the source he was using was his girlfriend. And it did not explicitly note Costco’s U.S.-based website does not have an online ordering service for birthday cakes (the piece links to Costco’s Australian website, which does allow cakes to be ordered over the Internet, but has never offered the dinosaur design in question as an option).

That didn’t stop Albrecht from seeing dollar signs. On Facebook, he told followers that his Inquisitr piece was a follow-up to the earlier one he had written for Examiner, which he claims also went viral and earned him around $3,000.

[Jessica] Eckerdt, his girlfriend and the source for the story, also celebrated his success. In the story, she told Albrecht that when she received the cake last year, she was “extremely shocked and upset” and found it to be “very distasteful.” But on Facebook, she took a different tone, writing in a comment that the couple “ate the cake and found it hysterical.”

We independently contacted the Mesa, Arizona, Costco location which Keys referenced in his article. A manager there confirmed to us that cakes must be ordered in-person at the store and that no online ordering system exists from which designs could be removed. The manager also confirmed that no complaints had been received by the store about "demonic" cake designs.

Prior to the Costco cake retraction story, the Inquisitr had previously published false articles claiming Ebola had "gone airborne" (it did not), that a black bakery was forced to bake a cake for KKK members (not true), and that a man was arrested for the murder of his imaginary friend (a story fabricated by a fake news website).