FALSE: Cosplay to Be Outlawed in Five States

An entertainment satire site's claim that cosplay was to be made illegal in five states was mistaken by many enthusiasts for genuine news. 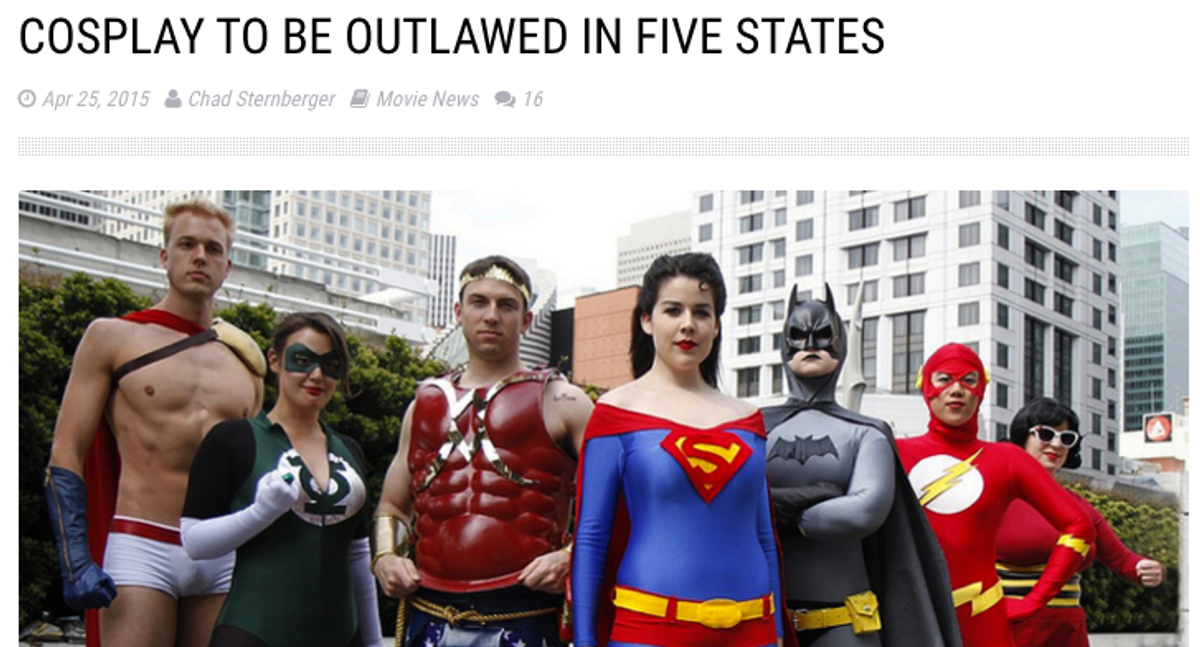 Claim:
Cosplay has been made illegal in five states.
Rating:

On 25 April 2015, the web site The Studio Exec published an article reporting that the hobby of cosplay was to be outlatwed in five states (an article which for indeterminate reasons began circulating widely in January 2016):

SAN DIEGO — The increasingly popular hobby of Cosplay — short for 'costume play' and involving adults gathering to wear costumes inspired by their favorite films and TV shows — has been made illegal in five states: Colorado, Ohio, Delaware, Kansas and New Mexico.

Although the motivations given for the cosplay bans have been varied and include issues of public health and decency, the main argument seems to be that — in the words of New Mexico's governor Susana Martinez — 'grown adults dressing up as Captain Jack Sparrow and Padme from the Phantom Menace is f**king retarded'.

Cosplay enthusiasts have responded with anger. Mark Jerkins of the Cosplay Association of America commented:

We are adults who enjoy dressing up in fancy dress-like costume and immersing ourselves in a fictional world, often with a kinky slant. And we demand respect.

The tone of the article was something of a giveaway to its satirical nature, especially the "quote" attributed to New Mexico's governor. Skeptical readers might also have noticed that there is no "Cosplay Association of America" (nor, therefore a chairperson of such named "Mark Jerkins").

Readers who scrolled to the bottom of the page could find a (very tiny) "About" link in which the Studio Exec explained their satirical nature:

Established in 2012, the Studio Exec is a satirical movie based website, publishing spoof news, reviews and comedy masterpieces.

Our work has been reported internationally and we have been directly responsible for three marital breakups, the sacking of fifteen copy editors and the devaluation of the word 'satire.'

We do use profanity so if you’re under 18 go away.

Although the Studio Exec bears a profile lower than that of other known satirical sites (such as The Onion for straight news, Duffel Blog for military satire, and GOMER Blog for humorous takes on medicine), it focuses on poking fun at the entertainment industry at large rather than deliberately attempting to dupe its readers. The large interval between the piece's publication and its viral popularity further suggests that the item was intended to be an in-joke which eventually escaped its humorous context through social media.