Do Takis Brand Corn Chips Cause Ulcers and Cancer in Children?

Excessive consumption of spicy snack foods can cause stomach problems in children, but no evidence suggests eating appropriate portions will cause the development of ulcers or cancer. 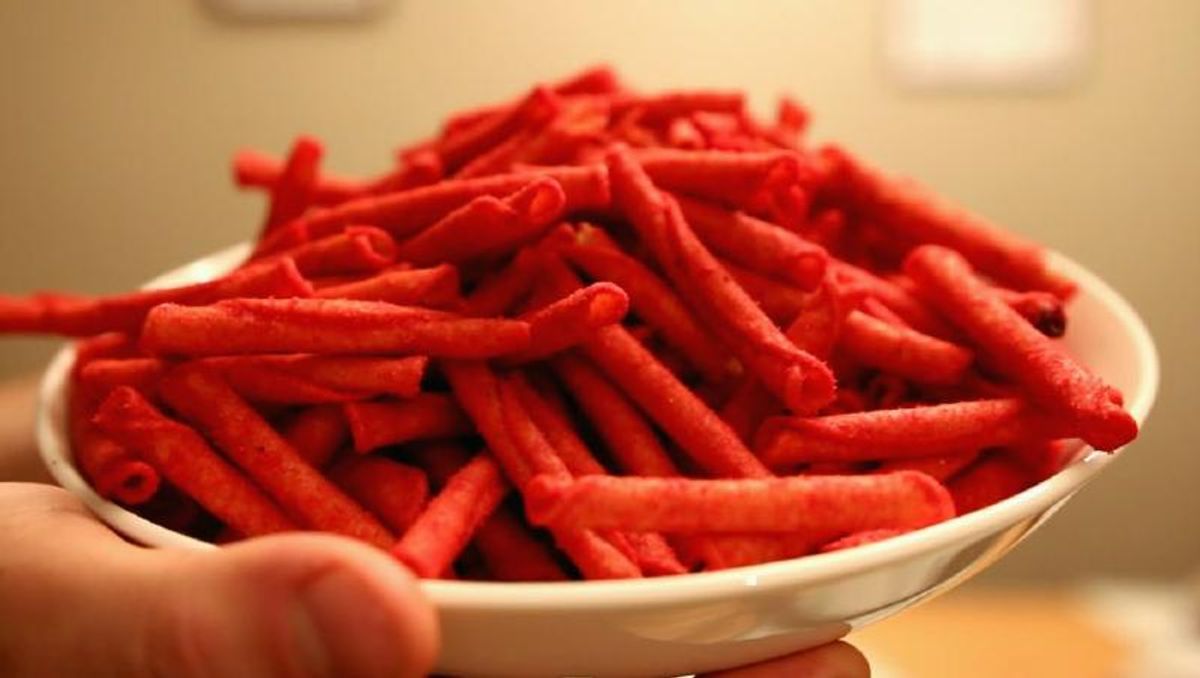 Excessive consumption of spicy snack foods (such as Takis brand corn chips) can lead to stomach pains and gastritis in children.

Evidence that moderate consumption of such snacks by children carries a significant risk of ulcers or cancer is lacking.

Takis are a brand of corn tortilla chips vended by Mexico-based Barcel and known for its spicy hotness:

Takis (also known as Taquis) are owned by the Barcel company, who are manufacturers of tortilla snacks and potato chips, as well as other confectionary and snack foods. Barcel is a unit of the famous Grupo Bimbo Company, who are also owners of many other popular Mexican brands. Grupo Bimbo purchased a snack factory in Queretaro during the late 70s which later became known as Barcel when the famous title was born in February 9th, 1978. The brand’s popularity has spread ever since and many factories were inaugurated in Queretaro Norte, the State of Mexico, Mexicali Baja California, Merida Yucatan and Hidalgo.

An item that began circulating on the Internet in June 2013 presents a first-person account of a woman who took her ten-year-old daughter to an urgent care facility for treatment of extreme stomach distress, where a physician reportedly suggested the daughter's consumption of Takis was the cause of her stomach pains (even though the mother stated her daughter consumed just "3 small bags of Takis a month"). Additionally, according to this account, the physician asserted that "the harsh chemicals and seasoning in the chips cause corrosion in the throat and stomach," that Takis are "causing stomach ulcers in children," and that she was currently treating a 16-month-old patient for throat cancer brought about by the toddler's consumption of Takis:

Yesterday, I took my 10 year old daughter to Urgent Care in Lancaster with extreme stomach pain (two days off and on). After the Dr. evaluated her stomach and ran urine tested, she checked for tenderness, she found the area that was causing my daughter the pain.

The Dr. then asked about what my daughter ate on a regular basis as well as what she had had within the last few days. (Keep in mind that we are pretty consistent with eating healthy and my daughter was having about 3 small bags of takis a month.) When my daughter told her she had takis, the Dr. warned her right away about the dangers of that product.

The Dr. mentioned how she had a 16 month old patient in the hospital with throat cancer due to those chips! The toddles teeth failed to grow because even his gums were affected and now the toddler is at The Children's Hospital in LA undergoing chemo. The Dr. also advised me NOT to allow my children to eat ANY of those hot chips. The product that they use to make them is harsh on the mouth, throat, and stomach.

PLEASE spread the word! STOP eating takis and hot chips!!! She explained how the harsh chemicals and seasoning in the chips cause corrosion in the throat and stomach. It is causing stomach ulcers in children. My daughter was given a 10 day treatment plan to prevent ulcers as the pain her her stomach was severe. PLEASE believe it and read up on the info online for yourself! I am making sure that everyone I come in contact with is aware of what we are unconsciously doing to ourselves and our children when we eat those things!

We consulted with some urgent care pediatricians of our acquaintance who told us that they had never treated, or heard of, any cases of children developing severe stomach pains linked to the consumption of Takis. Moreover, they said, no credible doctor would definitively pronounce that consumption of one type of food (or any other single factor) had "caused" a particular case of cancer — although relationships have been established between certain risk factors and the onset of cancer, no given case of cancer can be reliably attributed to one identifiable cause.

Some reports indicate that cases of children developing stomach aches after eating Takis and similar snack foods are known, but that the issue seems to be linked to children consuming those snacks in immoderate and excessive amounts far beyond the "3 small bags a month" referenced in the above account:

The spice [in Takis] increases stomach acidity, so children "get stomach aches, sometimes so terrible they're doubled over in pain," said Yvonne Juarez, chief of pediatrics at Kaiser Permanente-Fresno. "I've had patients go to the ER because of it. It's insane, absolutely insane."

Melissa Ortiz, a Kaiser-Fresno dietitian, said it's rare for a child to stop at [consuming a single 1-ounce bag]. Too often, children and teens are eating 2 or 3 ounces of Hot Cheetos or Takis in a single sitting, she said. At that point, "it's not a snack, it's a meal."

Gabriella Gaona, 16, of Fresno, said her mother no longer lets her eat either snack after she got sick and had to go to the hospital: "I had Takis for six months straight and that's all I would eat."

Dr. Robert Glatter, an emergency medicine physician for Lenox Hill Hospital in New York, said, "A number of patients who have consumed [Flamin' Hot] Cheetos in excess have complained of pain in their upper abdomen, rising up into their chest, likely due to due to the red peppers and spice contained in the snack."

As well, some physicians have noted that children have been taken to emergency rooms after eating Takis and similar snacks not because they were ill, but because their excessive consumption of those snacks resulted in misinterpreted symptoms:

Parents, she says, falsely believe they're seeing blood in the stool and take the kids to the ER to find out nothing is wrong.

"So even though we might eat some foods with red food dye in them regularly, our stool doesn't usually become discolored unless you eat huge amounts of it," Berchelmann said. "Flamin' Hot Cheetos is one food that people will eat enormous amounts of and will see a change in their stool."

Berchelmann says parents could use this as a teaching moment, talking with their kids about gluttony and eating things in moderation.

However, some critics maintain that children commonly over-consume such snack foods because the foods themselves are engineered to promote that behavior:

Some scientists and doctors cite the addictive qualities of food products like Cheetos as one reason why children may overeat them. “It’s something that has been engineered so that it is fattier and saltier and more novel to the point where our body, brain, and pleasure centers react to it more strongly than if we were eating, say, a handful of nuts,” Ashley Gearhardt, a clinical psychology professor at the University of Michigan, told the Chicago Tribune. “Going along with that, we are seeing those classic signs of addiction, the cravings and loss of control and preoccupation with it.”

The bottom line remains that children should avoid spicy snack foods and other processed snacks in large quantities in order to avoid gastritis and other health risks, but no solid evidence indicates that moderate consumption of such snack foods puts youngsters at risk for stomach ulcers or cancer.

Takis' parent company, Barcel, did not respond to our request for additional information on this topic.