The Missouri Congresswoman's claims about an alleged 2015 incident were met with considerable skepticism, in November 2021. 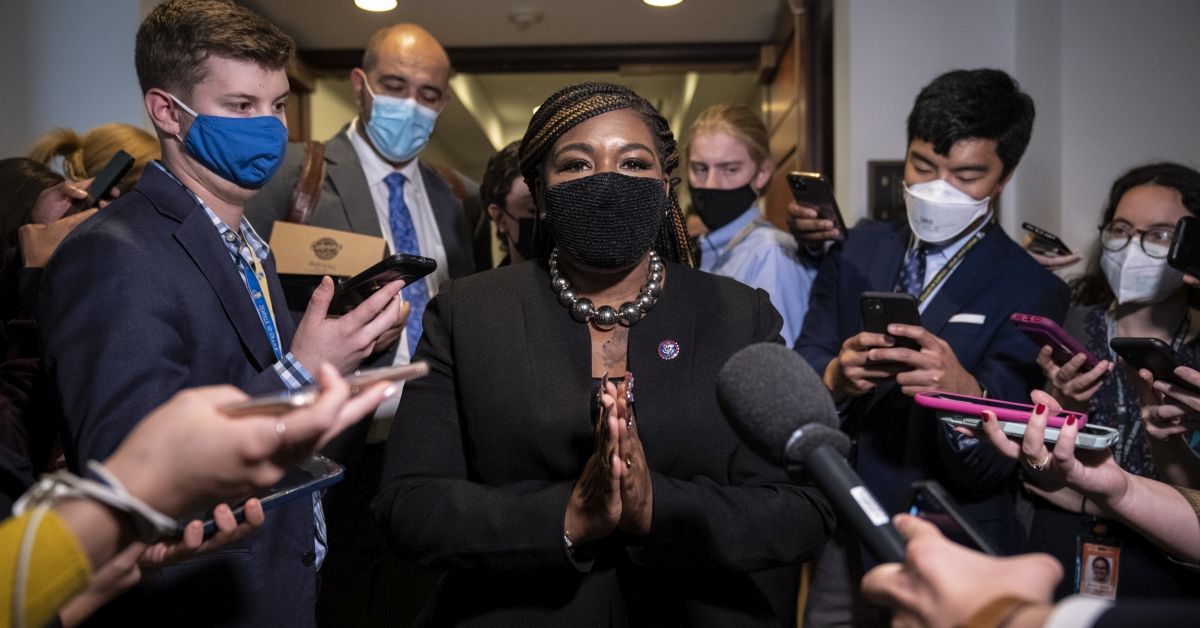 In November 2021, Democratic Congresswoman Cori Bush raised eyebrows when she made the startling claim that, during protests in Ferguson, Missouri, back in 2015, white supremacists shot at her and her fellow anti-racism demonstrators, with impunity.

Bush came to prominence as a pastor and community leader during the 2014-2015 unrest in St. Louis and Ferguson, following the fatal police shooting of Michael Brown, an unarmed 18-year-old Black man. She went on to be elected as the first Black congresswoman from Missouri in 2020.

On Nov. 15, she tweeted out her reflections on the ongoing trial of Kyle Rittenhouse, an 18-year-old Illinois man charged with several counts, including murder, for his role in the shooting deaths of two men during civil unrest in Kenosha, Wisconsin, in August 2020.

When we marched in Ferguson, white supremacists would hide behind a hill near where Michael Brown Jr. was murdered and shoot at us. They never faced consequences. If Kyle Rittenhouse gets acquitted, it tells them that even 7 years later they still can get away with it. Bush's claim was a remarkable one, and suggested that white supremacists were effectively given license to shoot at Black protesters in Ferguson, and never brought to justice for what would be very serious violent crimes. It was also one that could not be quickly or readily corroborated, which prompted significant skepticism about its veracity. Ferguson Police Chief Frank McCall no doubt added to that skepticism when he told the St. Louis Post-Dispatch he was not aware of any such incident having taken place.

The congresswoman's claim was not fabricated out of thin air, but rather related to a specific alleged incident in January 2015. However, we have not yet been able to obtain evidence that supports her core claim, namely that known white supremacists did indeed shoot at protesters, in their capacity as protesters. Moreover, a key figure in the alleged events of that day told Snopes she never saw any individual responsible for the shooting (and therefore could not corroborate the claim that they were white supremacists), and also did not recall having seen Bush at the time.

In the absence of concrete evidence which clearly establishes the accuracy or inaccuracy of Bush's claims, we are issuing a rating of "Unproven." If solid evidence becomes available, we will update this fact check accordingly.

Snopes sent a list of detailed questions to Bush's congressional staff: requesting evidence in support of her claims; asking whether she or others had reported any purported incidents to law enforcement or non-profit organizations; and seeking clarification on the number of incidents in question. In her tweet, Bush used the past continuous tense "white supremacists would hide behind," which suggested a series of events.

Similarly, in a Congressional speech in February 2021, when reflecting upon her experience of the Jan. 6 attack on the U.S. Capitol, Bush said "I feel like I'm back. I feel like this was one of the days out there on the streets, when the white supremacists would show up and start shooting at us..." [Emphasis is added]

In response, we received an email from Anna Bahr, a progressive political consultant from the firm Left Flank. Bahr directed us to social media posts about an alleged shooting incident at an apartment complex in Ferguson, on Jan. 19, 2015, as well as the following statement:

While on the frontlines of the Ferguson Uprising, Congresswoman Bush and other activists were shot at by white supremacist vigilantes. The question we need to ask is why white supremacists feel empowered to open-carry rifles, incite violence, and put Black lives at risk across our country.

The following is a summary of the claims that have been made about that supposed shooting incident, which allegedly took place at or outside Canfield Green — now known as Pleasant View Gardens — an apartment complex located just feet from where Brown was shot dead in August 2014.

In the face of vocal online skepticism about Bush's account, in November 2021, St. Louis activist Ohun Ashe defended the congresswoman's claims, writing on Twitter: "This is TRUE! I vividly remember hiding under porches in Canfield as shots were fired at us. No one came to help us. Ferguson police would be nearby. We would come from under porches using cars as shields in between gun shots to make it out."

Ashe's use of the past continuous tense — "We would come from under porches" — again suggested a series of events, rather than just one. Snopes emailed her a list of detailed questions, in an effort to clarify this and other issues, but we did not receive a response.

We also contacted the woman with the Facebook username Meechie Jordan, in an effort to obtain additional relevant evidence connected to the Canfield Green incident, her own hospitalization, the bullet she purportedly handed over to Ferguson police as evidence, the potential role of white supremacists in the incident, and the purported presence of Bush. We did not receive a response.

One significant figure in the alleged events of Jan. 19, 2015, who did speak with Snopes was Ayanna Delaine Barney — the woman who owns the car that was damaged during the incident, allegedly as a result of shots fired in the direction of a group of protestors.

Barney told Snopes she had never reported the incident to any law enforcement agency, and did not believe anyone else had either. Asked whether she could discern the race or possible white supremacist affiliations of the alleged shooters, Barney told Snopes she never saw any shooter, in part because it was dark out at the time of the incident. She also said she had no recollection of Bush's having been present during the events in question.

Barney added that she was still at a loss as to why the alleged shooting incident took place, but she noted that some who were present at the time have since speculated that it may have resulted from a feud between protesters that spiraled out of control. We have found no evidence to support that hypothesis, but it does indicate that Bush's white supremacists claim was not universally accepted among those present at the incident on Jan. 19, 2015.

We sent follow-up questions to Bush's acting spokesperson Bahr, noting the absence of evidence to support the Congresswoman's claim that white supremacists were behind the shooting, and that she was present for it, and requesting such evidence. We did not receive a response to those follow-up questions, in time for publication.

Armed right-wing groups such as the Oath Keepers, were conspicuously present during the protests and unrest in Ferguson during 2014 and 2015. Indeed, Bush herself made a contemporaneous note of their presence, describing an uneasy encounter she had with heavily-armed, white Oath Keepers, during an interview in August 2015 (begins around 51 minutes). However, we have not yet been able to obtain concrete evidence about the race or ideological affiliation of the alleged shooters from the Jan. 19, 2015 incident, and Bush did not provide any such evidence.

Snopes sent Ferguson police a list of detailed questions about their investigation into the purported Jan. 19, 2015 incident at Canfield Green apartments. A spokesperson for Chief Frank McCall told Snopes the department was conducting internal research on foot of our request. However, after we made repeated attempts to obtain a substantive response from police, Ferguson City Manager Eric Osterberg told Snopes both the city and its police department was declining to comment on Bush's claims.

Several individuals posted online about an alleged shooting incident at the Canfield Green apartments in Ferguson, on Jan. 19, 2015. A small number of photographs suggest, but don't definitively demonstrate, that a shooting incident of some kind did take place on that date, and may have caused damage to a car, as well as grazing a bystander.

However, we could find no evidence that a police investigation ever took place, and therefore no sense of what the conclusions of any such investigation were. Bush very prominently claimed that the incident consisted of white supremacists shooting at anti-racist protesters, but has so far provided no evidence to support that characterization, and such evidence was not available from other public sources.

Bush may or may not have accurately described and characterized an incident on Jan. 19, 2015. As of now, the evidence available does not allow us to make a determination either way. Until or unless that changes, we are issuing a rating of "Unproven."