Actor Corey Feldman reported he was stabbed over his claims that he was victim of pedophilia, but police statements don't back up his account. 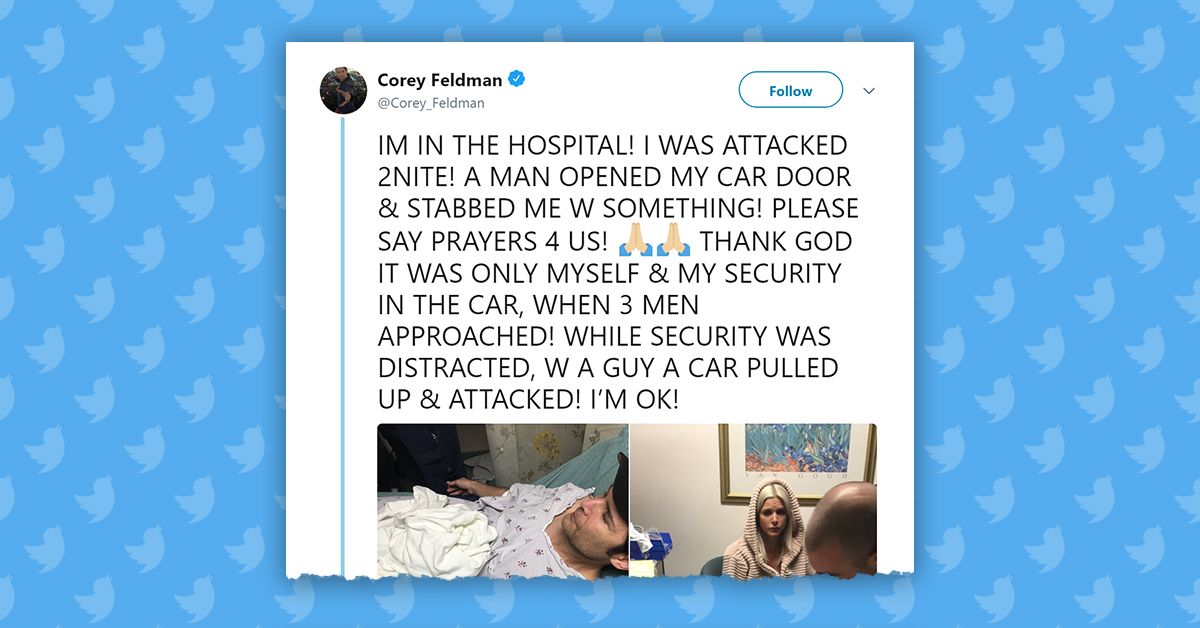 Claim:
Corey Feldman was stabbed by assailants angered by his claims that he was victim of pedophilia.
Rating:

On 28 March 2018, actor Corey Feldman reported via Twitter that he had been stabbed while he was driving in Los Angeles, blaming a "wolfpack" for the purported attack:

IM IN THE HOSPITAL! I WAS ATTACKED 2NITE! A MAN OPENED MY CAR DOOR & STABBED ME W SOMETHING! PLEASE SAY PRAYERS 4 US! ???? THANK GOD IT WAS ONLY MYSELF & MY SECURITY IN THE CAR, WHEN 3 MEN APPROACHED! WHILE SECURITY WAS DISTRACTED, W A GUY A CAR PULLED UP & ATTACKED! I’M OK! pic.twitter.com/TZ0ppZeEWN

@LAPD R CURRENTLY INVESTIGATING THE CASE AS AN ATTEMPTED HOMICIDE! I HAVE HAD MOUNTING THREATS ON ALL SM PLATFORMS BY THIS VILE “WOLFPACK” & THIS IM SURE IS A RESULT OF THOSE NEGATIVE ACTIONS! I HAVE REASON 2 BELIEVE ITS ALL CONNECTED! ENOUGH IS ENOUGH! HOW SICK R THESE PPL?!?

Speaking to TMZ, Feldman posited that the purported attack was related to his claims about pedophilia in Hollywood:

Corey Feldman has a detailed story about a group of men that were following his car before yanking his door open and stabbing him with a sharp object, and Corey thinks this might be an intimidation tactic over his recent claims that he was victim of pedophilia.

He says his security guard had words with someone in the other car and, when Corey was stopped at a red light, the passengers in the other car made their move. Corey says one of the guys pulled his door open and jabbed him one time with a sharp object -- either the tip of a knife or a syringe.

In a video published by TMZ, Feldman elaborated on his assertion that the assault was related to his pedophilia claims:

A representative of the Los Angeles Police Department (LAPD) provided conflicting information to Los Angeles television station KTLA, stating that an unidentified person had merely gesticulated at Feldman while his car was stopped at a traffic light, and that no wound had resulted from the incident:

Officer Drake Madison said Feldman, who was behind the wheel, and a passenger were at a stoplight when an unknown person approached the driver's window, made a "jabbing motion" and fled. Feldman drove himself to a hospital, Madison said.

The actor had no laceration to his stomach, and it's unclear what the weapon was, the officer said.

But according to the Los Angeles Police Department, there are “no lacerations to Mr. Feldman’s abdomen,” spokesman Luis Garcia said.

Police received a call around 10:45 p.m. reporting an assault with a deadly weapon. Feldman told police that he was driving his car with a passenger and was stopped at a red light at the intersection of Reseda and Ventura boulevards when “someone, an unknown person, opened his driver side door and jabbed at his abdomen with an unknown object,” Garcia said.

Feldman then took himself to the hospital, where he was treated and released, according to police.

While Feldman said he was stabbed with a sharp object, police know of no injuries and have no suspect or weapon descriptions.

In a TMZ video, Feldman described his purported injury as "the world's smallest stab wound" to a police photographer:

An investigation into Corey Feldman's stabbing claims is ongoing, and police have suggested "road rage" (rather than pedophilia) was a possible factor in the incident.