Who Is the Cop Checking His Phone in Uvalde Shooting Surveillance Video?

Questions about the identity of the officer have polarized people online. 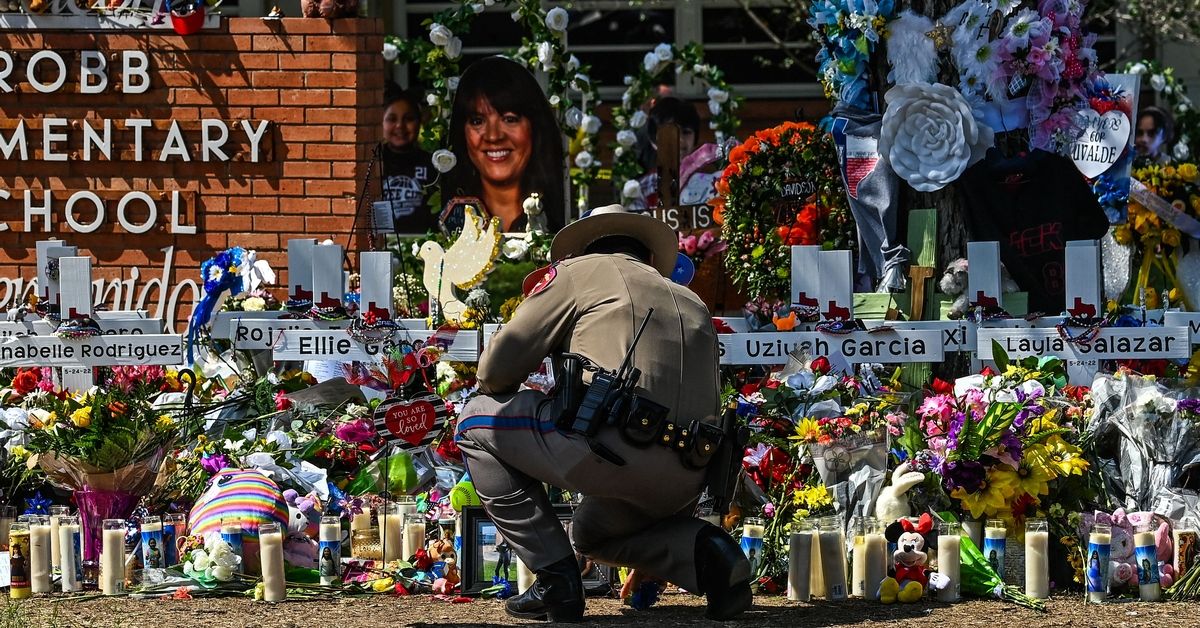 Claim:
A police officer checking his phone during the Uvalde school shooting on May 24, 2022, was Ruben Ruiz, husband of victim Eva Mireles.
Rating:

On July 12, 2022, surveillance camera footage showing the hallway at Robb Elementary School in Uvalde, Texas, during a May 24 mass shooting that took the lives of 19 children and two teachers was released to the public.

The harrowing footage shows the shooter, 18-year-old Salvador Ramos, walking the hallway and entering classrooms, where gunfire can then be heard. It also shows police entering the hallway but failing to intervene as the sound of gunfire continued to rip through the school.

In the footage, an officer in the hallway can be seen with a handgun drawn, and at one point, he pulls a cell phone out of his pocket and looks at the screen. Social media users zoomed in on the image and noticed that the phone's lock screen contained a "Punisher" logo with American flag colors.

Police in Uvalde have been heavily criticized for their response to the Robb Elementary shooting because they waited more than an hour before confronting the shooter as he opened fire in classrooms. So the image prompted disparaging commentary online:

The image is authentic. But after it went viral, with angry comments about an officer checking his phone during an active shooter situation at an elementary school, some interjected to claim that the officer was Ruben Ruiz, whose wife, a teacher, was also inside the school. Joe Moody, a Texas state legislator from El Paso, for example, claimed it was Ruiz:

Ruiz's wife, teacher Eva Mireles, was inside the classroom where the shooting was occurring. She was corresponding with her husband and had told him she was shot. Ruiz was widely reported to have tried to rescue his wife but was stopped from doing so.

"What happened to him as he tried to move forward into the hallway, he was detained and they took his gun away from him and escorted him off the scene," Texas Department of Public Safety Director Col. Steven McCraw said during a June hearing held by the Texas Senate about the police response to the shooting.

But others claimed the person pictured was not Ruiz, but was instead a different officer.

In an email, Busbee told Snopes she doesn't know the identity of the officer checking his phone.

We also reached out to Anne Marie Espinoza, executive director of Uvalde CISD communications and marketing, asking about the identity of the officer and whether it was Ruiz. In an email, Espinoza told us she was unable to provide information, stating:

Uvalde CISD is cooperating with the investigations being conducted by the Texas Department of Public Safety and the FBI. As part of this cooperation, we are prohibited from sharing any information related to the investigation. This includes providing comment or confirmation on any individual accounts regarding the events of May 24.

Ruiz worked for the Uvalde CISD police, although his profile page on the school district's website has since been removed. A cached version of the profile states that Ruiz started at the school district in 2018 after leaving the Uvalde Police Department, where he had worked since 2007. The profile said he had attended active shooter and school SWAT trainings while employed with Uvalde PD.

The "Punisher" logo originated with a Marvel character, an outlaw called Punisher; The logo has found favor among police, military, and also members of right-wing extremist movements.

This story was updated with additional information about our efforts to ascertain the identity of the officer.

This story has been updated to include comment from Uvalde CISD spokesperson Anne Marie Espinoza.