Were Hotel Guests Sickened by a Coffee Pot Used to Cook Meth?

The number of clandestine meth labs in hotels that are never found is difficult to pin down. 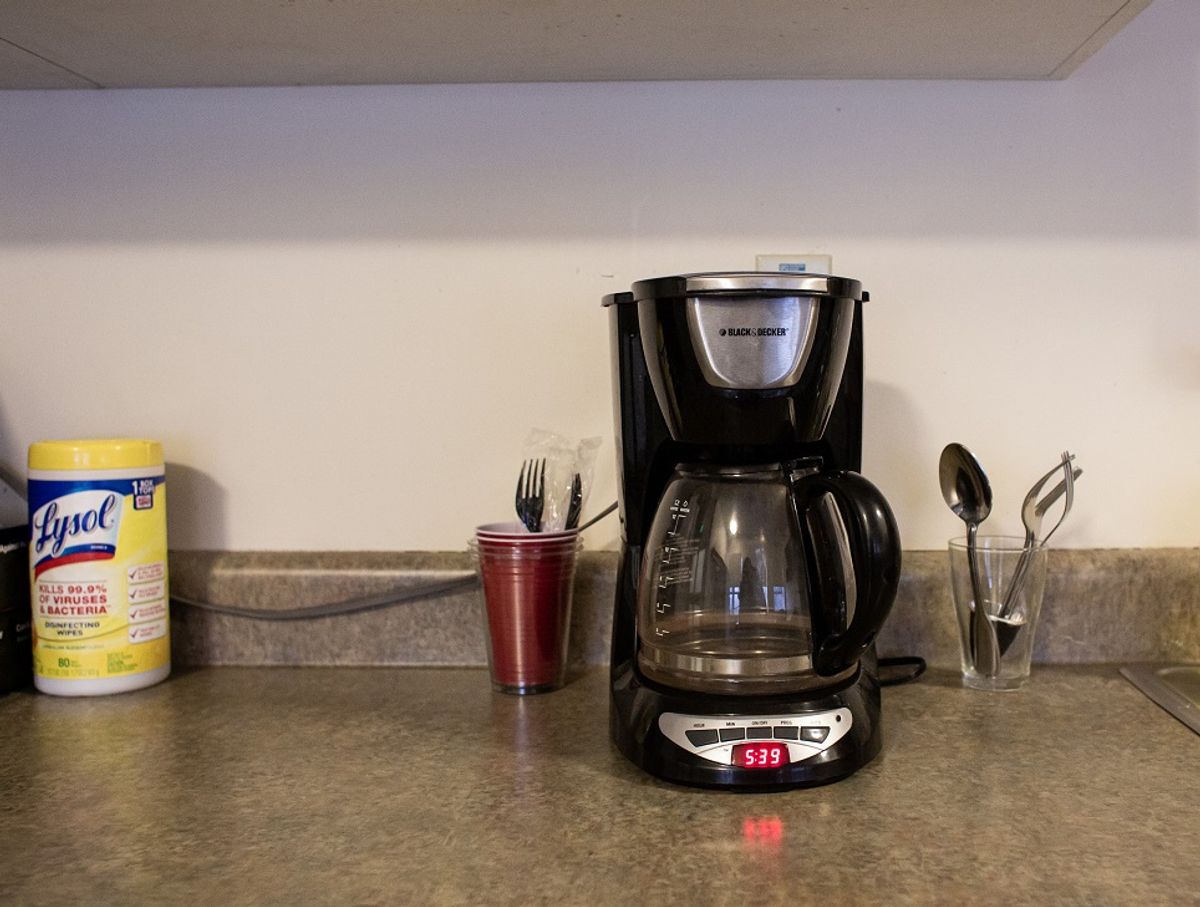 Claim:
A father and son were gravely sickened at an Omaha Ramada resort by a hotel coffee pot was used to cook meth by a previous guest.
Rating:

In September 2015, a message above about Omaha resort guests purportedly sickened by a coffee pot used to cook meth by previous guests was published by a user named Amber Richard to the Facebook page "Kearney Area Exchange Group 2.0." (The message was visible only to members of the closed group, but members reproduced its text in separate Facebook status updates and forwarded screenshots to us.)

Thank you to everyone that has been concerned and the prayers have been answered. We will b going home today. As some of u know we were on vacation at the Ramada hotel coco keys resort in Omaha NE. Yesterday morning my husband did the normal and made a cup of coffee, and Deekin loves all the creamer and sugar that goes in so he had to share with dad. Sadly to find out the people prior to our stay had been cooking meth in the room coffee pot. Hence my husband and 2 yr old son were fighting for another chance here on this beautiful planet. Sitting here and holding my son today i am so thankful for my loving family. If anything comes out of this I hope that people will pass this on so families in the future do not make coffee in their hotel rooms. The cops said this is happening all the time here in little ol Kearney. Nothing can b done according to Omaha police so PLEASE be aware and learn from our mistakes.

So I just read a post in Kearney Area Exchange where a family was staying at Ramada-Coco-Keys in Omaha, made coffee in the room coffee maker and they were taken to Hosp very sick. Found out prior hotel guests were found cooking meth in the room coffeemaker. Has been reported from Police that this is happening all over!! Be safe people!

Unsubstantiated rumors about individuals cooking meth in hotel coffee pots have circulated on the internet since at least 2007. A 2009 Associated Press article reported an uptick in arrests related to drug-making in hotels and motels and noted that the practice was "probably" fairly common, but it didn't mention the activity's causing any injuries to unwitting guests:

U.S. Drug Enforcement Administration records obtained by The Associated Press show that states reported finding evidence of drug-making in 1,789 motel and hotel rooms in the past five years — and that's just those the authorities found.

The number of clandestine labs that are never found is difficult to pin down. There was a slight uptick in hotel and motel lab busts reported to the Drug Enforcement Administration in 2008 from the previous year, with 149 in 2006, 87 in 2007 and 127 in 2008. The tally was 461 in 2005 and 965 in 2004, before there were restrictions on purchasing over-the-counter decongestants often used as ingredients. The DEA count is based on states that reported labs.

"It probably happens all the time," said John Martyny, a National Jewish Medical and Research Center associate professor who is also an industrial hygienist and meth researcher. "The difficulty is, how do you make that attribution? You might think it is from cigarette smoking."

In April 2013, a hospitality industry publication article addressed the liability meth labs present for properties. That piece cited one instance wherein a hotel room had to be rehabilitated after it was used as a meth lab, an onerous process which suggested significant palpable damage to the unit:

When a meth lab was found in a La Quinta hotel in Denver, the expense to fix the hotel was enormous. “This is not just rehab work, you need to be a highly trained individual to perform decontamination,” Buchheit said, especially with large heating, ventilation and air conditioning systems to consider.

“Everything has to be removed,” Buchheit said.

“You have to basically tear apart that room and rebuild it,” Ohman Back said. “You have to tear out the carpeting, take the dry wall down. You have to replace the furniture and maybe the neighboring rooms as well.

However, we've been unable to locate any reports wherein any resort guests were sickened via a hotel coffee pot because they occupied a room once used as a meth lab. We contacted both the Omaha Police and the general manager of the Ramada hotel adjacent to the Omaha CoCo Key Water Resort to find out whether the incident described (or any like it) had occurred in recent months. Police quickly responded and answered that the department didn't "have any reports of this here in Omaha," contradicting the poster's claim that the scenario was common and known to law enforcement in and around the Kearney-Omaha area. Moreover, the officer with whom we spoke was skeptical that the scenario presented was possible, let alone plausible:

We don't have any reports of this here in Omaha. I contacted the General Manager from Ramada and he has been in contact with the Kearney PD. I'm not a chemist but I'm sure it's highly unlikely, if not impossible to be exposed to meth as was described. And not sure how she would know the coffee pot was "infected with meth" if she didn't report it and have it tested. It's looking like it's a BAD rumor at this point.

On 10 September 2015, the Omaha Police Department acknowledged the then-popular claim on their Facebook page and indicated that at that time, they had received no reports matching the rumor:

Since the publication of this post, we have received additional information. We are currently working with the Kearney PD to investigate this situation.

On 14 September 2015, original poster Amber Richard spoke to a local news outlet about her husband's claim:

"All I know is the facts, that my loved ones tested positive for amphetamines," Amber said.

After she posted a warning about what had happened to her family, some questioned if they intentionally got high.

"I do have a past with it over ten years ago; I did have a problem," Travis answered. But he said he's been clean since.

To date, police in Omaha have released no further information about the case.