Did Congresswoman Ateesha Nubbins Put an Upper-Age Limit on Voting?

A meme created by a satirical Facebook page convinced some viewers that a fictional congresswoman was attempting to pass a non-existent law. 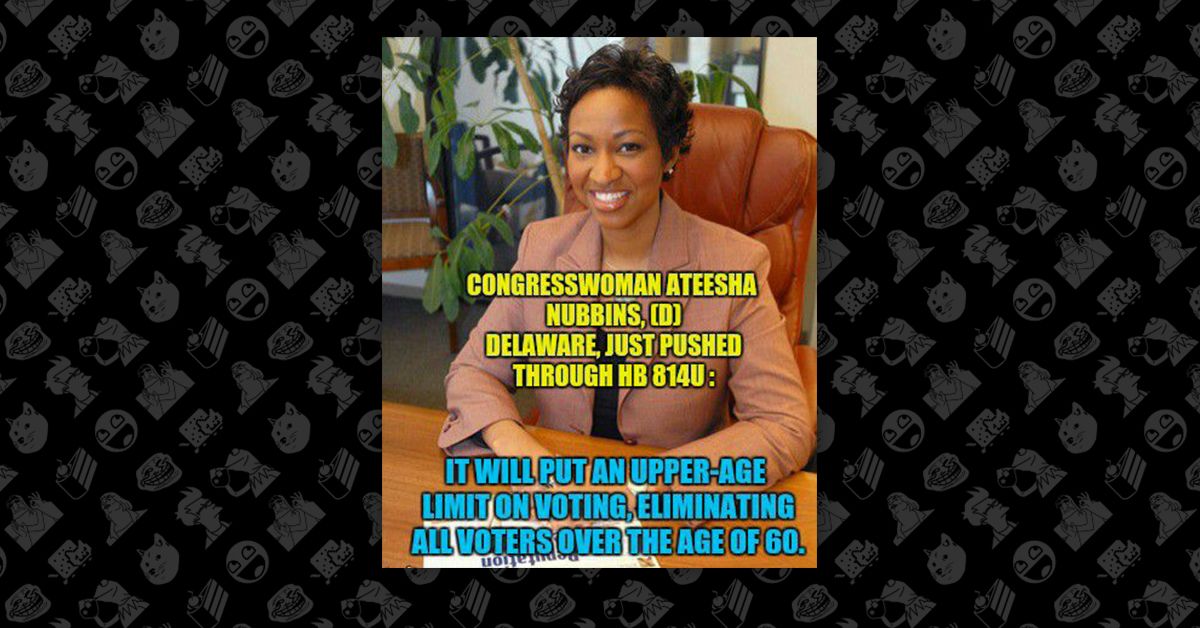 Claim:
Congresswoman Ateesha Nubbins pushed for a bill that would establish an upper-age voting limit.
Rating:

The Facebook page "The Last Line of Defense" is a constant source of sarcastic political memes and misinformation, often fooling credulous users despite its long history of sharing fake news and disclaimers labeling its content as "satire."

In mid-July 2018, we began receiving questions from readers about a congresswoman named "Ateesha Nubbins" who was allegedly pushing a bill numbered "HB 814U," which would place an upper-age limit on voting.

Sure enough, when we looked into the matter we found that the rumor had originated as a meme shared by that well-known purveyor of political piffle, The Last Line of Defense: Everything about the meme is inaccurate.

For starters, there is no congresswoman named Ateesha Nubbins. The pictured woman is actually Laurie Robinson Haden, a lawyer who serves as the senior vice president and assistant general counsel at CBS Corp. in New York.

Nor is there legislation currently before the U.S. Congress (or the Delaware General Assembly, for that matter) numbered "HB 814U." A bill with a similar number, HR 814, was introduced in the House of Representatives in 2017, but it pertained to veterans' benefits, not the voting age. The Illinois General Assembly considered a bill numbered HB 814 in 2015 in Illinois, but again, it had nothing to do with voting.

As noted above, The Last Line of Defense does not publish factual content. The page's "About" section states that nothing on it is real, and comprises "a collection of the satirical whimsies of liberal trolls masquerading as conservatives."