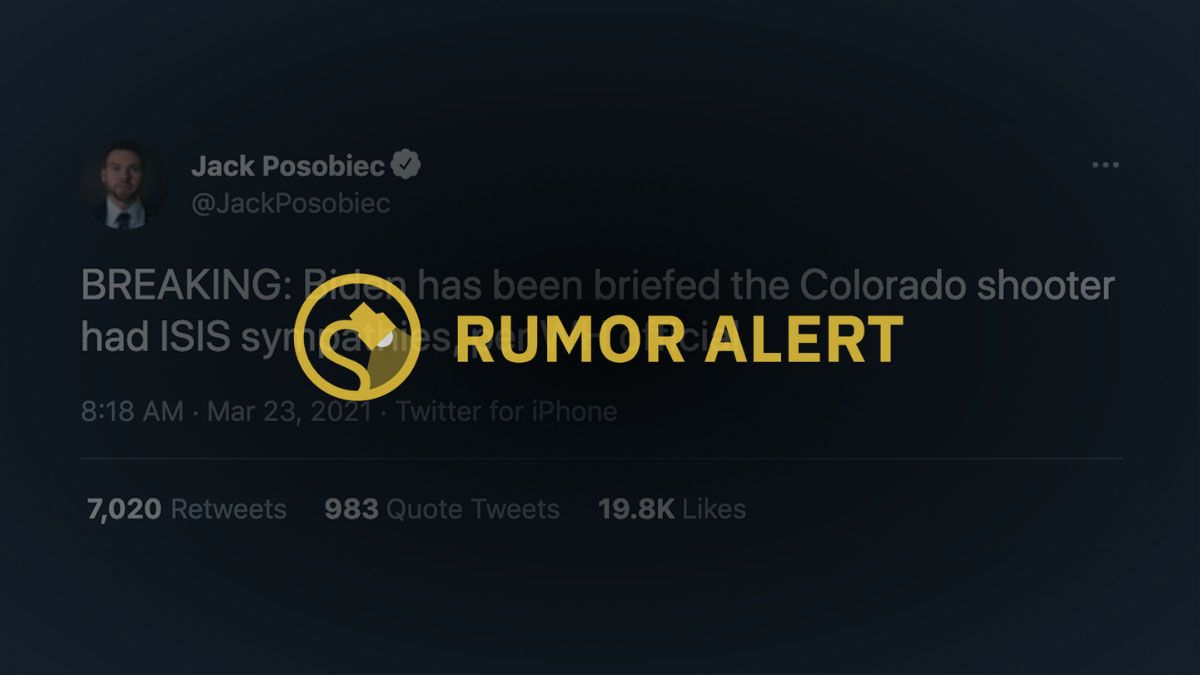 On March 22, 2021, 10 people were killed in a mass shooting at a King Soopers supermarket in Boulder, Colorado. On the next day, a rumor surfaced that claimed shooting suspect Ahmad Al Aliwi Alissa "had ISIS sympathies."

Readers inquired about a tweet from pro-Trump internet personality Jack Posobiec. In the tweet, Posobiec claimed: "BREAKING: Biden has been briefed the Colorado shooter had ISIS sympathies, per WH official." The tweet appeared to cite an anonymous White House official.

On the day after the shooting, U.S. President Joe Biden spoke on the subject:

In the speech, he said that he had been briefed by the U.S. attorney general and the director of the FBI. However, he provided no specifics, nor did he mention ISIS, terrorism, or other similar terms.

A Lack of Evidence

There was a lack of reporting and evidence to confirm or deny this claim as of the time this story was published.

Investigators were expected to continue to provide information on the breaking-news incident in the hours and days that followed the mass shooting. We will update this story in the future should more information come to light that would allow us to apply a traditional fact-check rating.

What We Do Know

The Associated Press reported that the Boulder grocery store mass shooting suspect is 21 years old. One of the victims was Eric Talley, a police officer who had served since 2010:

Authorities said Ahmad Al Aliwi Alissa was from the Denver suburb of Arvada and that he engaged in a shootout with police Monday afternoon inside the Boulder store. The suspect was being treated at a hospital and was expected to be booked into the county jail later in the day on murder charges.

Investigators have not established a motive, but authorities believe he was the only shooter, Boulder County District Attorney Michael Dougherty said.

A law enforcement official briefed on the shooting told The Associated Press that the gunman used an AR-15 rifle, a lightweight semiautomatic rifle. Officials were trying to trace the weapon. The official was not authorized to speak publicly and spoke to AP on condition of anonymity.

The suspect’s family told investigators they believed Alissa was suffering some type of mental illness, including delusions. Relatives described times when Alissa told them people were following or chasing him, which they said may have contributed to the violence, the official told AP.