A meme about Colorado's "free birth control" program is mostly accurate, but lacks some important context. 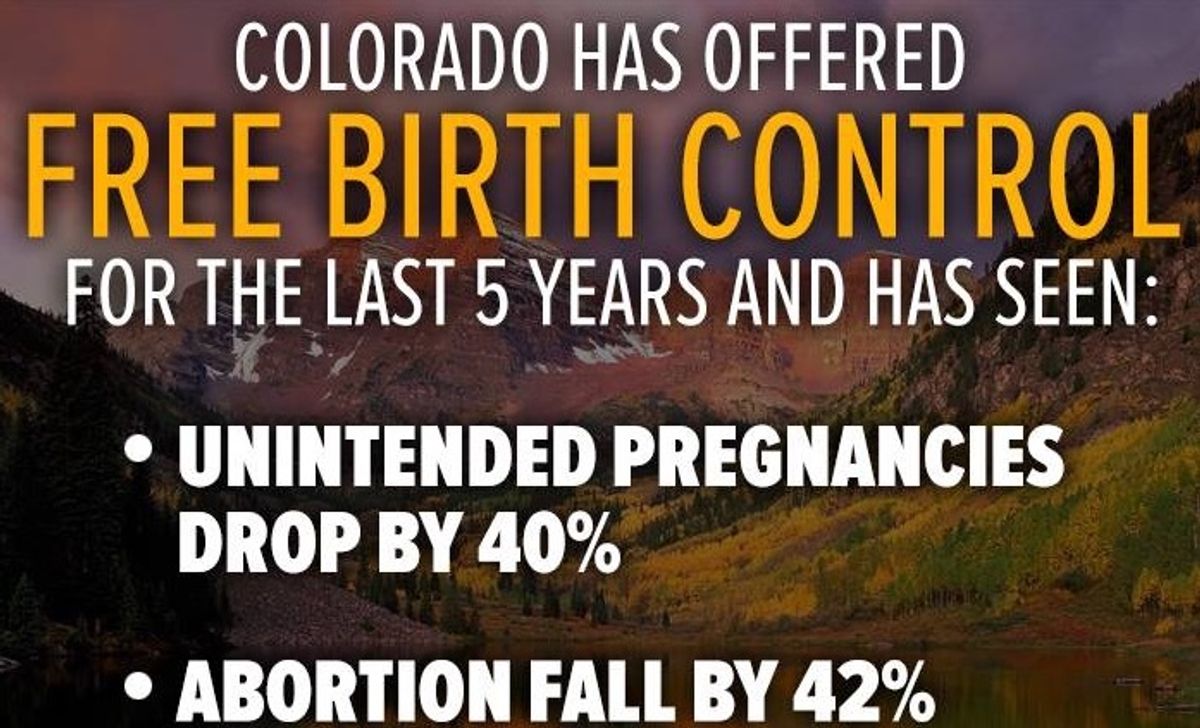 Claim:
Colorado has offered free birth control for five years, leading to: a 40 percent drop in unintended pregnancy, a 42 percent drop in abortions, and millions of dollars in healthcare savings.
Rating:

The state of Colorado's long-acting reversible contraceptive (LARC) funding initiative appeared to lead to a large drop in abortion, unintended pregnancy, and millions of dollars saved in prevented costs associated with childbirth.

The statistics only reflected LARCs, not all birth control.

As early as August 2015, this meme circulated on social media, claiming that during a five-year period in Colorado, the availability of free birth control led to many positive outcomes:

COLORADO HAS OFFERED
FREE BIRTH CONTROL
FOR THE LAST 5 YEARS AND HAS SEEN:

The meme included at least five claims: that the state of Colorado offered free birth control for a five-year period before August 2015, that unintended pregnancies fell by 40 percent in that time, that 42 percent fewer abortions were obtained during the period, that millions of dollars in healthcare expenditure were spared by it, and that the program ought to be (but was not) replicated elsewhere in the United States.

A July 2015 article appeared to be the source for the meme's statistics, as well as a reference for details that did not appear in the graphic. According to the piece, the program had operated for six years at the time of publication, and the statistics came from the Colorado Department of Public Health and Environment. The numbers from CDPHE specifically reflected long-acting reversible contraceptives, or LARCs, such as intra-uterine devices or hormonal implants, not birth control pills or similar methods:

Over the past six years, Colorado has conducted one of the largest experiments with long-acting birth control. If teenagers and poor women were offered free intrauterine devices and implants that prevent pregnancy for years, state officials asked, would those women choose them?

They did in a big way, and the results were startling. The birthrate among teenagers across the state plunged by 40 percent from 2009 to 2013, while their rate of abortions fell by 42 percent, according to the Colorado Department of Public Health and Environment. There was a similar decline in births for another group particularly vulnerable to unplanned pregnancies: unmarried women under 25 who have not finished high school.

The July 2015 article included a link to an undated CPDHE report:

For every dollar invested in the LARC program, an estimated average of $5.85 was avoided within a three-year period by the Colorado Medicaid program—a good return on investment. The birth rate for Medicaid-eligible women ages 15 to 24 dropped sharply each year between 2010 and 2012. CDPHE estimates that Colorado saved between $49 million and $111 million in birth-related Medicaid costs.

As of early 2014 (a year before the Times article), the provisions of the Affordable Care Act led to a 67 percent rate of coverage among patients prescribed birth control pills. That number was slightly lower for patients using IUDs:

The proportion of privately insured U.S. women who paid zero dollars out of pocket for oral contraceptive pills increased sharply, from 15% to 67%, between the fall of 2012 (before the ACA’s contraceptive coverage requirement took effect for most women) and the spring of 2014, according to a new Guttmacher study published in the journal Contraception. The study found that the proportion of women who paid nothing out of pocket also increased among those using the vaginal ring (from 20% to 74%) and among those using injectable contraceptives (from 27% to 59%). For women using the IUD, the proportion increased from 45% in the fall of 2012 to 62% in the three subsequent waves of the study combined.

Despite Colorado's birth control program success, it met with lawmaker opposition in 2015. But in April 2016, the state once again secured funding for the program. Widely circulated figures did not, however, include all methods of birth control; the statistical differences between LARCs and more popular methods like the Pill were stark:

LARC methods are around 20 times more effective than any other type of reversible birth control excluding the DMPA injection. In a 2012 study of over 7400 participants, the failure rates in participants using oral contraceptive pills, birth control patch, or the vaginal ring was 17-20 times higher than the risk of those using LARC methods. For those under 21 using the pills, patch or ring, the risk of failure was almost twice as high as the older participants. But rates of unintended pregnancy regardless of age remained low in the LARC (and depo-provera group)[.]

It is true that CDPHE's figures reflect a 42 percent drop in abortions, a 40 percent drop in unintended pregnancies, and a savings range of $49 to $111 million in birth-related Medicaid costs during the period of time that LARCs were available for free to residents of Colorado. Funding for the program was briefly disrupted in 2015, and re-enabled in April 2016.