A predictable death hoax claimed that embattled NFL star Colin Kaepernick died during a national controversy over patriotism in August 2016. 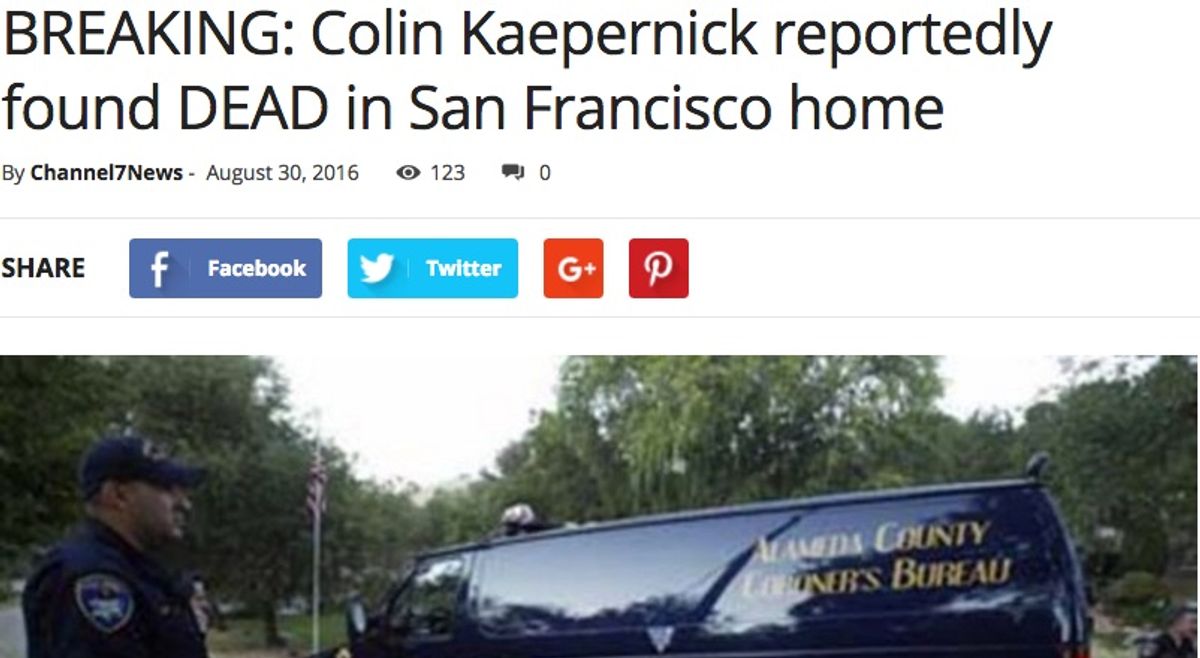 Claim:
Colin Kaepernick was found dead in a San Francisco home during a controversy over his refusal to stand during the national anthem.
Rating:

On 26 August 2016, San Francisco 49ers quarterback Colin Kaepernick declined to stand for the national anthem during a NFL game, causing a flare-up of controversy. On 30 August 2016, what appeared to be a local news affiliate reported:

After several days of media attention and public humiliation following his decision to sit during the national anthem of a pre-season game, San Francisco 49’ers quarterback Colin Kaepernick has reportedly been found dead in his upscale Alameda County home.

Rumors of the quarterback’s death began circulating early Tuesday morning, and a coroner’s van was seen outside the Kaepernick estate, according to sources on the ground.

While foul play is not suspected, it is reported that two guns and a large amount of narcotics were retrieved from the scene.

The story is a hoax. Only one fly-by-night "news site" carried the fabrication. However, like many fake news stories using legitimate news outlet's call letters or other common regional affiliates' design elements, the claim quickly gained traction on social media.

Needless to say, Kaepernick's "death" went unreported by any credible outlets. The article used a photograph of an Alameda County Coroner's van, which was stolen from a 2011 news item about an unrelated crime.

The San Francisco 49ers' training facility is in Santa Clara, and Kaepernick reportedly lives in San Jose — both of which are in Santa Clara County, not Alameda County.