Why Are Coins Left on Gravestones in Cemeteries? 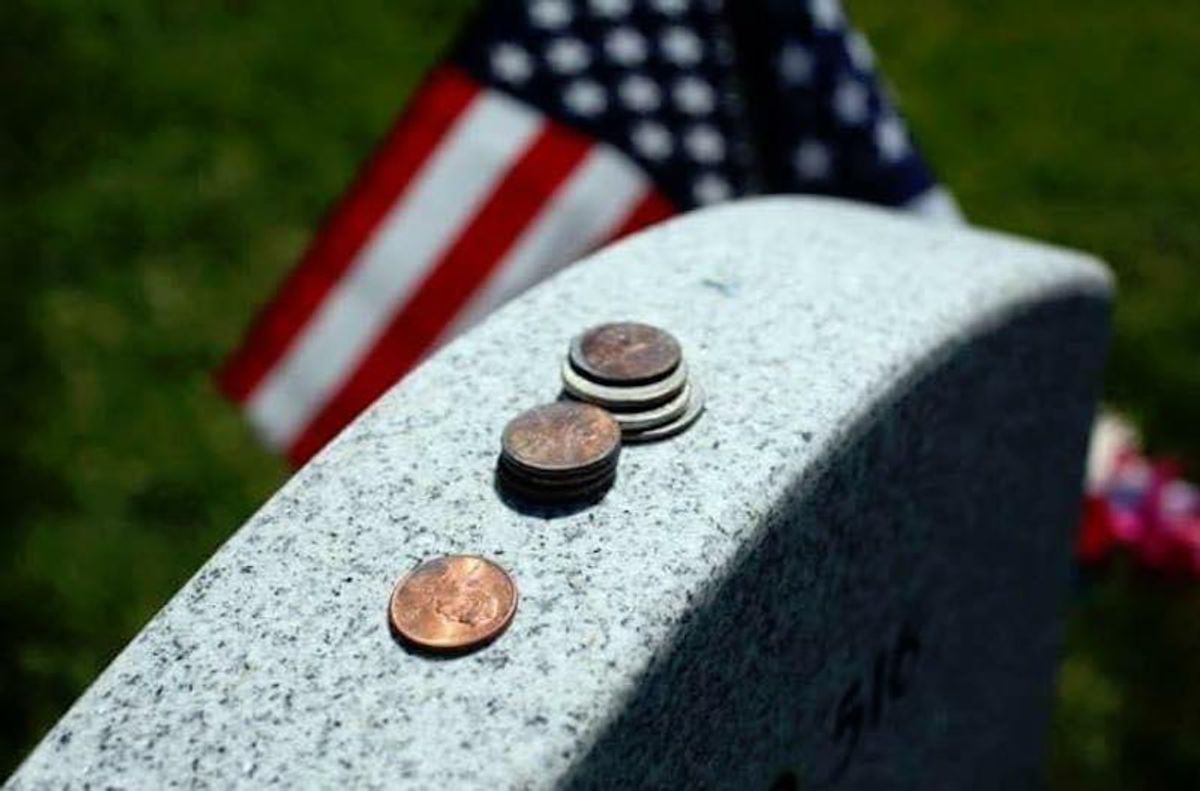 Humans have been leaving mementos on and within the final resting places of loved ones almost from the beginning of the species. Excavations of even the earliest graves uncover goods meant to serve the deceased in the next world, such as pottery, weapons, and beads. But what about coins being left on graves?

The earliest known coins date to the late seventh century B.C., and as societies began embracing such monetary systems, the practice leaving of coins in the graves of citizens began as yet another way of equipping the dear departed for the afterlife.

Mythologies within certain cultures added specific purpose for coins being left with the dead. In Greek mythology, Charon, the ferryman of Hades, required payment for his services. A coin was therefore placed in the mouth of the dear departed to ensure he would ferry the deceased across the rivers Styx and Acheron and into the world of the dead rather than leave him to wander the shore for a hundred years. In England and the U.S., pennies were routinely placed on the closed eyes of the dead, yet the purpose for that practice was not clear — some say it was to keep the eyes of the corpse from flying open (even though the eyes, once shut by the person laying out the body, do not reopen).

In these more recent days, coins and other small items are sometimes discovered on grave markers, be they plaques resting atop the sod or tombstones erected at the head of the burial plot. These small tokens are left by visitors for no greater purpose than to indicate that someone has visited that particular grave. It has long been a tradition among Jews, for example, to leave a small stone or pebble atop a headstone just to show that someone who cared had stopped by. Coins (especially pennies) are favored by others who wish to demonstrate that the deceased has not been forgotten and that instead his loved ones still visit him.

Sometimes these small remembrances convey meaning specific to the person buried in that plot. For more than twenty years, every month someone has been leaving one Campbell's tomato soup can and a pocketful of change on the plain black granite tombstone that marks the grave of Andy Warhol. The soup can is easy to explain, given Warhol's iconic use of that commodity in his art, but the handful of change remains a bit of a mystery. In similar vein, visitors often leave pebbles, coins and maple leaf pins at the grave of Canadian Prime Minister Lester B. Pearson, the man who replaced Canada's Red Ensign with the Maple Leaf flag.

Regarding the 'tradition' of soldiers leaving on the headstones of fallen comrades varying denominations of coins to denote their relationship with the deceased, the earliest reference to this practice we've found so far dates only to June 2009, when it appeared as a web site post. A version now commonly circulated in e-mail appears to have been drawn from it, albeit some changes have slipped in, such as "A buddy who served in the same outfit, or was with the deceased when he died, might leave a quarter" becoming "By leaving a quarter at the grave, you are telling the family that you were with the soldier when he was killed":

While visiting some cemeteries you may notice that headstones marking certain graves have coins on them, left by previous visitors to the grave.

These coins have distinct meanings when left on the headstones of those who gave their life while serving in America's military, and these meanings vary depending on the denomination of coin.

A coin left on a headstone or at the grave site is meant as a message to the deceased soldier's family that someone else has visited the grave to pay respect. Leaving a penny at the grave means simply that you visited.

A nickel indicates that you and the deceased trained at boot camp together, while a dime means you served with him in some capacity. By leaving a quarter at the grave, you are telling the family that you were with the soldier when he was killed.

According to tradition, the money left at graves in national cemeteries and state veterans cemeteries is eventually collected, and the funds are put toward maintaining the cemetery or paying burial costs for indigent veterans.

In the US, this practice became common during the Vietnam war, due to the political divide in the country over the war; leaving a coin was seen as a more practical way to communicate that you had visited the grave than contacting the soldier's family, which could devolve into an uncomfortable argument over politics relating to the war.

Some Vietnam veterans would leave coins as a "down payment" to buy their fallen comrades a beer or play a hand of cards when they would finally be reunited.

The tradition of leaving coins on the headstones of military men and women can be traced to as far back as the Roman Empire.

While "Cleaning of the Stones" at the National Cemetery in Holly. I noticed a quarter placed on one of the stones. Later I also noticed a nickel placed on another stone. I was so touched with this that I took pictures.I googled about the coins, and found this out. I am very proud to share this.

A coin left on a headstone lets the deceased soldiers family know that somebody stopped by to pay their respect. Leaving a penny means you visited.

A nickel means that you and the deceased soldier trained at boot camp together. If you served with the soldier, you leave a dime. A quarter is very significant because it means that you were there when that soldier died. Despite the claim of this tradition dating back to the days of the Roman Empire, there's no reason to suppose that it does. A coin might be placed in the mouth of a fallen Roman soldier (to get him across the River Styx), but the deceased's comrades would more likely have been expending any further coinage on a funeral banquet in his honor rather than interring it with his remains. Given the lack of documentation attesting to the origins and consistency of this 'tradition,' it is perhaps best regarded not as an actual common practice but instead as someone's idealized legend of what should be.

Yet military folk do sometimes leave very special remembrances at the graves of deceased servicemen: challenge coins. These tokens identify their bearers as members of particular units and are prized and cherished by those to whom they have been given; thus any challenge coins found at gravesites were almost certainly left there by comrades-in-arms of the deceased.

It needs be mentioned that not only coins, medallions, and stones have been found on military headstones. In July 2013, a wife of a deceased serviceman discovered another woman's name on her husband's marker in place of her own. Edna Fielden, widow of Air Force Master Sergeant Billy Fielden (buried at Fort Logan Cemetery in Denver 25 years earlier) was shocked to discover the headstone bore the inscription "Dolores" over the legend "His Wife" when she brought her grandchildren to visit the grave.

Update: In early 2021, coins on graves was the subject of a number of online advertisements. One of the ads read: "[Pics] Here's Why You Should Never, Ever Touch Coins Left On A Gravestone." Another claimed: "[Pics] If You See Coins Placed On A Gravestone, Here's What It Means." Both ads led to lengthy slideshow articles.