Did the company's CEO James Quincey really say "The time has come for a Santa Claus that's more relevant to our times"? 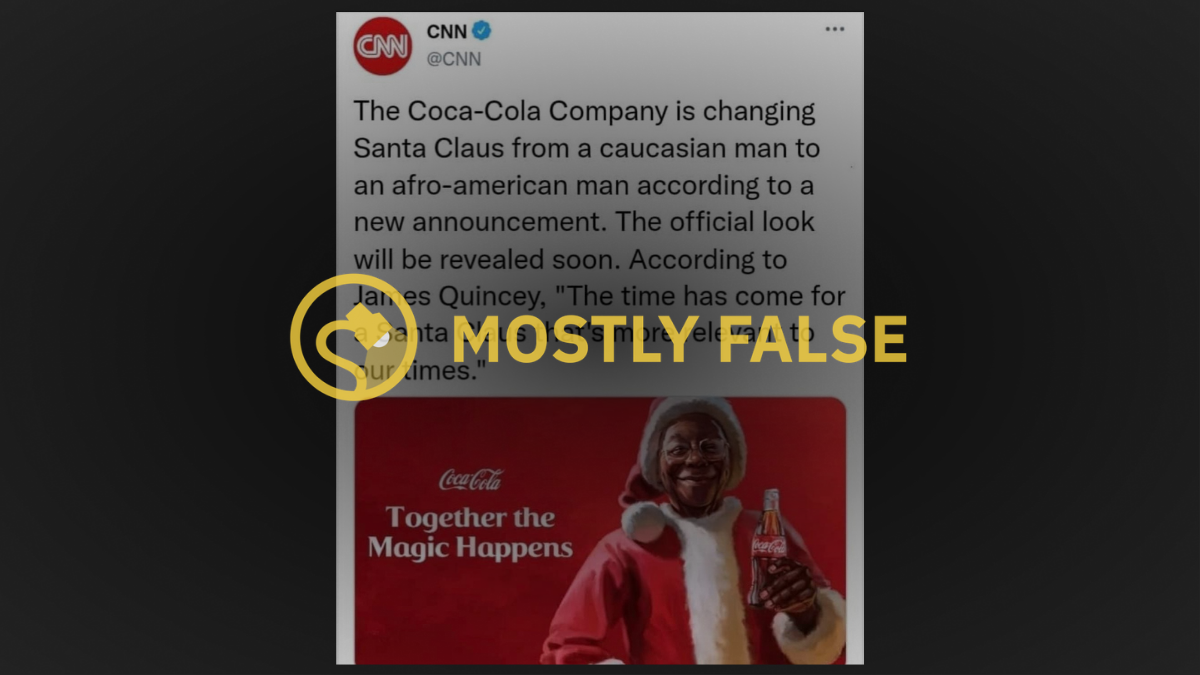 Claim:
In 2021, CNN reported that Coca-Cola had announced it was "changing Santa Claus from a caucasian man to an afro-american man."
Rating:

In 2020, Coca-Cola collaborated with a Brazilian TV network to produce a fictional drama in which an elderly Black man seeks to play the role of Santa Claus. But...

Widely-shared screenshots of a CNN tweet reporting that Coca-Cola had announced it was "changing Santa Claus from a caucasian man to an afro-american man" were bogus, and the company had made no such announcement.

During the build up to Christmas in 2021, social media users shared what appeared to be a tweet published by CNN, describing an announcement by Coca-Cola that they would be "changing Santa Claus" from white to Black, in order to make him "more relevant to our times."

The purported tweet contained a graphic — which consisted of a painting of an elderly Black man dressed as Santa and holding a Coke, along with the tagline "Together the Magic Happens" — and the following text:

The Coca-Cola company is changing Santa Claus from a caucasian man to an afro-american man according to a new announcement. The official look will be revealed soon. According to James Quincey, "The time has come for a Santa Claus that's more relevant to our times." The supposed CNN tweet was shared widely on Facebook in December 2021. However, it was bogus. We found no record of CNN ever having published an article or posted a tweet to this effect, nor any such "announcement" from Coca-Cola, and no record of James Quincey — the company's real CEO — having written or uttered the words attributed to him in the fake tweet.

The tweet also contained some inconsistencies and implausible features, which were a clue to its inauthenticity. For example, the tweet contained an image of what appeared to be a Black Santa Claus, but its text stated the new look would be "revealed soon." Furthermore, the use of "afro-american" was also a red flag, since it is not, as of 2021, preferred nomenclature for Black people or various aspects of Black culture, and not a word that CNN has, in reality, ever included in a tweet.

Although the tweet was fabricated, and Coca-Cola's CEO had never uttered the words falsely attributed to him, the broader claim that Coca-Cola had, in some sense, taken part in a reimagining of the image of Santa Claus as a Black man, was not without any basis. As such, we're issuing a rating of "Mostly False."

In December 2020, Brazilian television channel TV Globo collaborated with Coca-Cola to produce its annual Christmas special television drama, which that year would revolve around an elderly Black man's efforts to play the role of Santa Claus, and would thus explore issues of racial discrimination and stereotyping within Brazilian society. The video below, produced by McCann, the advertising firm behind the collaboration, provides further context.

Coca-Cola Integrated Advert By McCann: Together the Magic Happens | Ads of the WorldTM. //www.adsoftheworld.com/media/integrated/cocacola_together_the_magic_happens. Accessed 15 Dec. 2021.