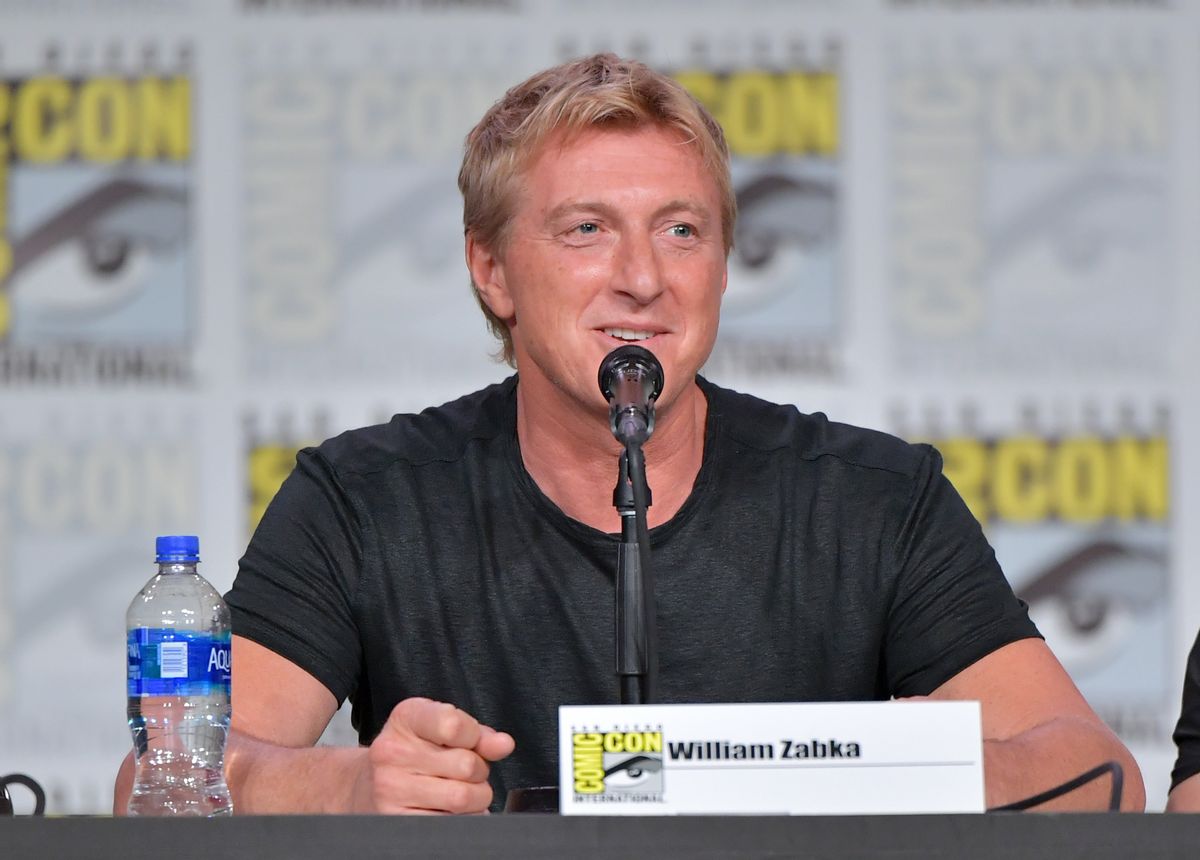 In early 2021, a Facebook message purportedly written by a character on "Cobra Kai" received interest. "Cobra Kai" is a TV reboot of the original "The Karate Kid" movies from the 1980s.

Fans of the new Netflix TV series appeared to repost the message in full. The long, all-caps block of text was written by the character Johnny Lawrence, who was portrayed by actor William Zabka.

It's true that the Facebook message from "Cobra Kai" is indeed legible. The Facebook Messenger response was drafted to Johnny's girlfriend from his high school days, Ali Mills. She was later known as Ali Mills Schwarber. The character previously appeared in the original 1984 film, "The Karate Kid." Her character was portrayed by Elisabeth Shue.

Behind Johnny's laptop appeared to be an "Internet for Dummies" book, and a Coors beer can and bottle. On the Windows XP desktop were icons for Microsoft Excel and Word. Below that was a new folder named "New Folder," likely a gag for the not-at-all-tech-savvy character.

On "Cobra Kai," he is talked out of sending the Facebook message by one of his students, Miguel Diaz. That message is transcribed below:

AND THEN IN 1992, IRON EAGLE 3 CAME OUT. YOU KNOW WHAT? I DON'T CARE WHAT THE CRITICS SAY, I THOUGHT IT WAS PRETTY GOOD. NOT AS GOOD AS IRON EAGLE 1 AND IRON EAGLE 2, BUT HEY, WHAT MOVIE IS? I THINK WAYNE'S WORLD WAS THAT YEAR TOO. THAT ONE WAS OKAY. THOSE NERDS HAD GREAT TASTE IN MUSIC, AND THE CHICK WAS HOT. WHAT WAS SHE DOING WITH HIM? HOW COME THE HOT CHICKS GO FOR THE LOSERS IN THESE MOVIES? ANYWAY, OTHER THAN THAT 1992 WAS A PRETTY QUIET YEAR. GOT FIRED AGAIN, BUT WHAT THE HELL DO THEY KNOW. I DIDN'T LIKE CONSTRUCTION ANYWAY. THEY ALL SPEAK SPANISH AND I'M PRETTY SURE THEY WERE MAKING FUN OF ME SOMETIMES. DO YOU KNOW WHAT A "GRINGO" IS? I STARTED LEARNING A LITTLE BIT OF SPANISH FROM MIGUEL AND HIS FAMILY. I KNOW "HOLA", "PLANTAIN", "TACO" AND "DINERO." PRETTY GOOD, HUH? WHERE WAS I? OH, RIGHT, 1993. THERE WAS THAT DINOSAUR MOVIE. PRETTY GOOD FOR THE NINETIES. I MEAN, NOT ANYWHERE NEAR WHAT WE HAD BACK IN THE DAY. REMEMBER PREDATOR? THAT MOVIE WAS BADASS! THIS DINOSAUR THING WAS PRETTY COOL BUT TOO MUCH SCIENCEY STUFF FOR ME. I GUESS YOU PROBABLY LIKED THAT THOUGH, RIGHT? I MEAN, YOU'RE A DOCTOR NOW. I COULD NEVER BE A DOCTOR. NOT AFTER THAT INCIDENT AT COMMUNITY COLLEGE (I TALKED ABOUT THAT A COUPLE PARAGRAPHS AGO, DOES FACEBOOK LET YOU GO BACK AND REREAD?) STILL THINK THEY OVERREACTED. ALL THE GREAT SCIENTISTS SET THINGS ON FIRE, RIGHT? LIKE EINSTEIN OR WHOEVER. ANYWAY, 1993. DUTCH GOT ARRESTED. THAT ONE WAS PRETTY STUPID. I WAS DRUNK FOR MOST OF IT, BUT I'M PRETTY SURE HE HOTWIRED A GOLF CART FROM THE COUNTRY CLUB. I LOOKED UP FROM THE BAR AND DUTCH IS DRIVING THIS THING AT HIGH SPEED, OR I GUESS AS HIGH AS SOMETHING LIKE THAT CAN GO, AND CRASHES IT INTO THE POOL! THEY HAD TO BRING A CRANE IN TO GET IT OUT. HE DID SOME TIME BUT IT WAS WORTH IT! ANYWAY, I DON'T THINK I'VE BEEN BACK TO THE COUNTRY CLUB SINCE THEN. SID WON'T LET THEM BAN ME BUT THOSE GUYS ARE ALL UPTIGHT, AND THEY ONLY SERVE FOREIGN BEER. IT'S OFFENSIVE. WE WON TWO WORLD WARS DRINKING AMERICAN BEER. WHAT THE HELL HAS BELGIUM EVER DONE EXCEPT GET INVADED? WHO WANTS TO DRINK THAT SHIT? I THINK I GOT OFF TOPIC AGAIN. LET'S GET BACK TO THE MID-NINETIES. 1994 WAS A SLOW YEAR. THE NINETIES SUCKED. MAN, YOU TURNED ON THE RADIO AND IT WAS JUST CRAP. WHO WRITES A SONG ABOUT BEING A LOSER? AND ALL THOSE GRUNGEY TYPES WITH THE FLANNEL. LET ME TELL YOU MUSIC IS SUPPOSED TO BE ABOUT BEING BADASS AND AWESOME, NOT ABOUT WANTING TO KILL YOURSELF. THAT SHIT CAN'T BE GOOD FOR KIDS TO HEAR, RIGHT? LOOK AT ME, WORRYING ABOUT WHAT THE KIDS ARE HEARING. I GUESS BEING A PARENT CHANGES YOU. NOT THAT I'M ALL THAT GREAT OF A PARENT. WELL, MIGUEL SEEMS TO LIKE ME OKAY. ROBBY DOESN'T, I MESSED THAT ONE UP PRETTY GOOD. CAN'T EVEN GET THE KID TO TALK TO ME ANYMORE. HE'S STUCK IN THERE FOR A FEW MORE MONTHS, AND HE'S GOT NOBODY. HE WON'T TAKE MY CALLS. I HOPE HIS MOM IS TALKING TO HIM AT LEAST. I THINK IT MIGHT BE TOO LATE FOR ME AND HIM. I MESSED UP TOO MANY TIMES. NOT THAT I'M A TOTAL SCREW UP. I'VE DONE SOME GOOD STUFF TOO! WHICH BRINGS ME TO 1995 AND HOW I MADE TWO GRAND BETTING ON THE OJ TRIAL.

The reboot of the original "The Karate Kid" films from the 1980s was a success for Netflix. The first two seasons originally debuted on YouTube Red (later known as YouTube Premium). They later became available on Netflix on Aug. 28, 2020. Season 3 debuted on Netflix on Jan. 1, 2021.

Jon Hurwitz, one of the series' showrunners, tweeted his excitement of the show's success on the platform:

We previously reported on a false rumor that "Cobra Kai" had been canceled. As of February 2021, the fourth season of the series was in production. However, a release date had not yet been announced.

In sum, a Facebook message that appeared on "Cobra Kai" was legible and genuinely transcribed by Netflix viewers.