All polls are not created equal. 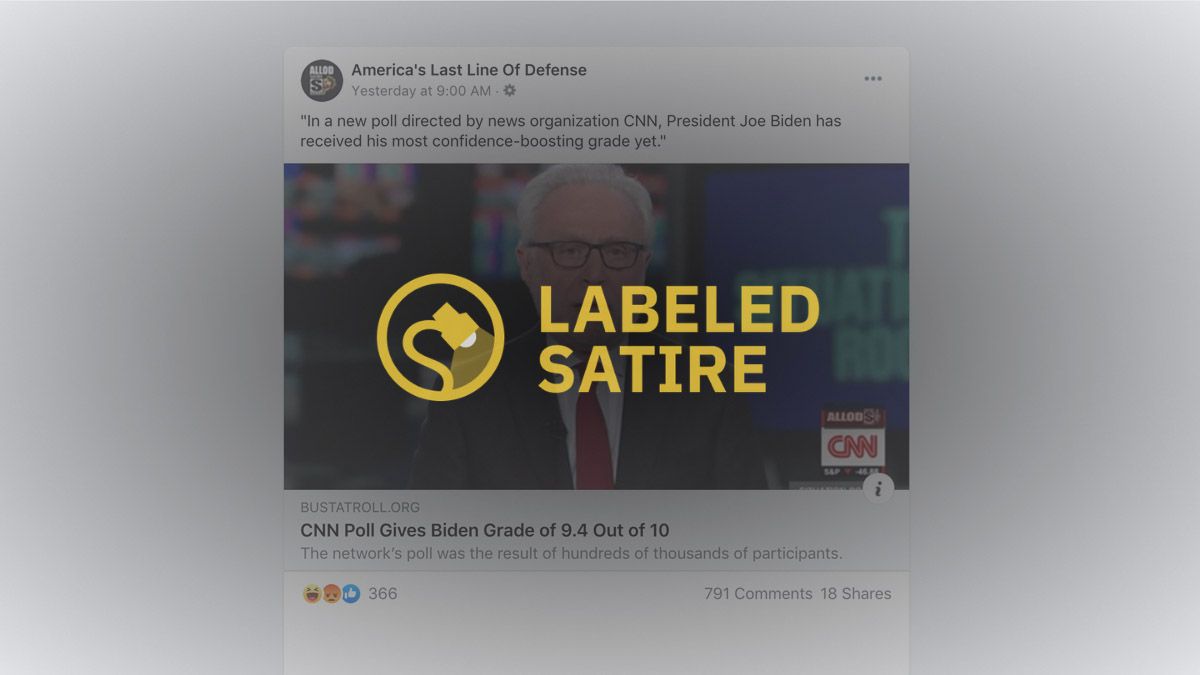 The story about a CNN poll giving Biden a rating of 9.4 out of 10 was labeled satire. (Image Via Facebook)

On April 7, 2021, the America's Last Line of Defense Facebook page published a post for a story about U.S. President Joe Biden. Its headline read: "CNN Poll Gives Biden Grade of 9.4 Out of 10." Other than several comments from trolls that jokingly impersonated Trump supporters, a good portion of the comments appeared to be from people who believed the story to be true.

The article that purportedly cited a CNN poll appeared to have originally been published on Feb. 10, 2021:

In a new poll directed by news organization CNN, President Joe Biden has received his most confidence-boosting grade yet. Of all respondents responding as Democrat, Republican, and Independent, America's follow-up to the embarrassment of Donald Trump has garnered a 9.4 out of 10, the highest approval rating since Barack Obama's first term with a 9.6.

Biden is certainly hitting a home run across the nation with his strategy of actually giving a shit about American citizens dying from the Trump plague, a key weakness in his former 2020 rival's platform. Although Trump was vaguely responsible for the "Warp Speed" program, consisting of making a phone call to the front desk at Pfizer Pharmaceuticals and mumbling: "Hurry up", he more or less abandoned the entire issue while thousands expired, to concentrate on feeding his dangerously stupid cult bullshit about "stolen elections" and imaginary "dead voters."

A similar poll from the network last year gave Trump a grade of 1.8, which only got that high because Wal-Mart had a sale on "Jitterbug" phones the month it was running, and because many Trump supporters pressed both the "1" and "2" buttons simultaneously, attempting to enter in a "12".

This item about a CNN poll giving Biden a high grade was not a factual recounting of real-life events. The story originated with a Facebook page and website that describes its output as being humorous or satirical in nature, as follows: