Pundits and conspiracy theorists claimed that CNN staged a demonstration in London involving Muslims after a June 2017 attack. 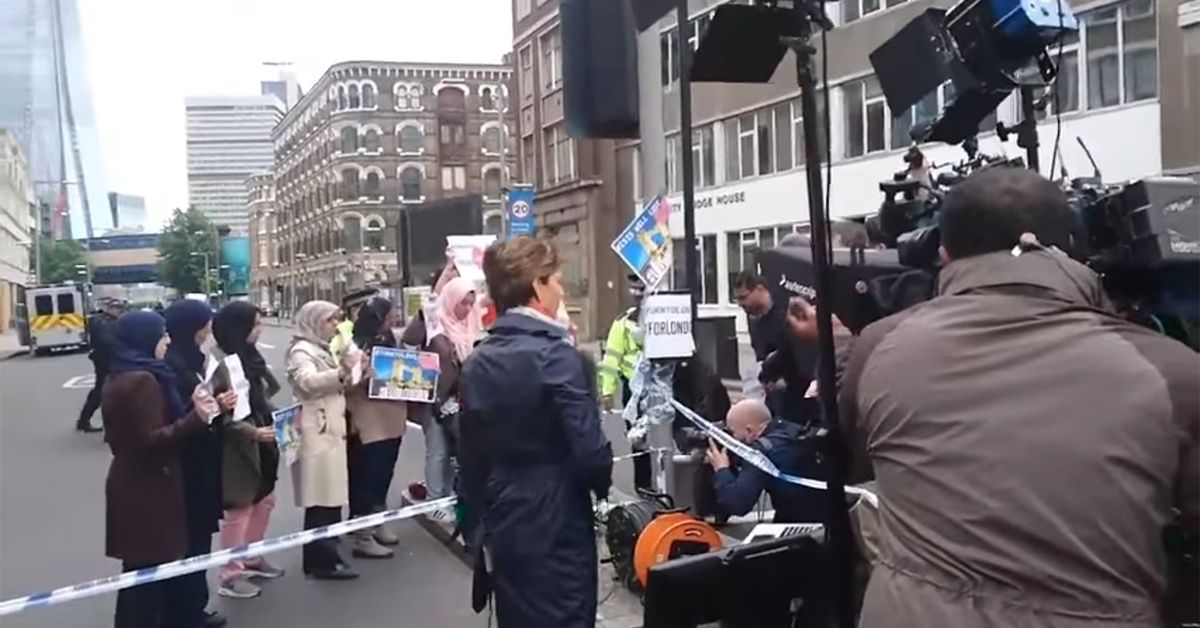 On 4 June 2017, the day after seven people were killed in an attack in London subsequently claimed by the Islamic State, conspiracy theorists claimed that CNN International "staged" a demonstration by Muslims condemning the incident the next day.

A video published to YouTube by Twitter user Markantro on 4 June 2017 was a primary source for the rumor:

Note the white police officers leaving before the CNN shot & the Asian officers coming in. They then left after they went off air! #fakenews https://t.co/Kkk0g5jOPA

The claims spread widely from there, with right-leaning American blog Gateway Pundit leading the charge in presenting it as an example of "fake news" in the making.

According to multiple versions of the rumor, the Twitter user (@Markantro) happened across the scene of CNN's staging or fabricating a report on Muslims' protesting the attacks in London. But nothing suggested that CNN "staged" the demonstrations to any extent greater than engaging protesters, directing their positions, and asking them questions as part of a news segment.

Those spreading the rumor claimed that the same person appeared in different videos wearing the same unique pink trousers, a dead giveaway that the person was a "paid protester." However, rumor-mongers did not elaborate as to why multiple photographs of the same protester indicated perfidy rather than multi-outlet coverage of the same protest.

The Daily Wire similarly speculated that the demonstrations were wholly falsified by CNN rather than simply reported on:

CNN International (CNNi) staged a backdrop of persons — presumably Muslims, including women in hijabs — during a Sunday news segment in London regarding the previous evening’s mass murder Islamic terrorist attack in the U.K. capital.

Nothing in any of the rumors provided definitive (or even shaky) evidence that the protests were staged (by CNN or any other party) for the purposes of favorable media coverage. Mediaite's coverage of the claims highlighted the public's unfamiliarity with the process of reporting live news:

For those not familiar with live news production, it is actually not that uncommon for hosts and producers to arrange protesters or pedestrians behind reporter to provide a varied background. Sources familiar with this live shoot tell Mediaite that the protesters (“Muslim Mothers”) were already very near the location and the Police simply allowed them to move behind Ms. Anderson and crew.

That said, there is reason to fairly critique this as “editorializing” the shoot and not just reporting the news. And in a climate where CNN is feeling a lot of criticism — most of which is unfounded — from the conservative corners of the Internet, this footage won’t help their cause.

CNN also provided a statement about the rumors terming them to be "nonsense":

This story is nonsense. The group of demonstrators that was at the police cordon was being allowed through by officers so they could show their signs to the gathered media. The CNN crew along with other media present simply filmed them doing so.

This is nonsense. Police let demonstrators through the cordon to show their signs. CNN along with other media simply filmed them doing so.

A source at CNN said that the reporters and equipment seen in the third-party video represented several news organizations, not just CNN, situated in front of a police cordon near London Bridge. The small group of Muslims at the demonstration (actually a vigil, according to the participants, who were there of their own volition) asked police for permission to cross the police barrier to be photographed. The police assented and escorted them into position. The shot was "arranged" only to the extent necessary to fit the group into the camera frame.

A CNN source told us:

We were in the middle of a live show when they appeared, and they moved in front of us so we could see their signs — for people to suggest that the protest was staged by the media is ludicrous.

That the demonstration was real, not staged, is clear from additional press coverage of the event. According to the BBC, the gathering was organized by the London Fatwa Council, who confirmed that their chairman, Shaykh Mohammad Yazdani, was present at the vigil to pay respects to the victims.

He also issued the public statement excerpted below:

I was shocked to my core when I learnt of the devastating attacks in London, as I left the mosque last night. Whilst myself and the majority of the Muslim community were busy in night time prayers, a horrible act of terror was being played out outside. I am deeply, deeply aggrieved that such heinous violence and terror again be upon our streets.

Coverage by the Telegraph and the Standard included photos and video of participants placing flowers at the site:

In short, the vigil was not a media invention. It was organized by the London Fatwa Council, a legitimate Islamic organization whose members have taken a vocal stand against terrorist attacks. Vigil participants were photographed, at their request, by international press organizations, including CNN. The charge that CNN or anyone else "staged" the event to "hype a narrative of widespread Muslim opposition" to the attacks is a politically motivated mischaracterization of what occurred.