Did CNN Show Edmonton, Canada, Fire Video as if It Were Lviv Explosion?

The footage in question showed CNN anchors John Berman and Don Lemon and was broadcast on the morning of March 26, 2022. 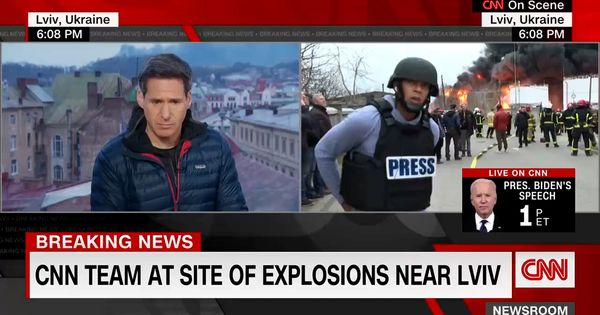 On March 27, 2022, the Telegram account @endilluminati posted a video from CNN with a false and misleading claim. The post with the CNN video showed anchors John Berman and Don Lemon and purported to show that the news network had rebroadcast old footage from a crude oil tank farm explosion in Edmonton, Canada, to represent an explosion in Lviv, Ukraine, during Russia's invasion in 2022.

The conspiracy theory arose after some users noticed some firefighters in Lviv were wearing gear with the word "Edmonton" on their backs.

According to CityNews Edmonton, the truth of the matter was simple. The reason why some of the firefighters in Lviv were seen wearing turnout coats with the word "Edmonton" was that firefighters in Canada had kindly donated some of their gear to Ukraine.

The original video of Lemon's reporting live from the aftermath of an explosion in Lviv was posted by a CNN anchor producer to Twitter. It was broadcast in the morning in the U.S., which was the evening for Ukraine:

On Telegram, @endilluminati first posted a screenshot from the CNN video with Lemon with a circle around the word "Edmonton" on a firefighter and the following caption:

But it's CNN we're talking about. Their credibility doesn't have a good standing. The Telegram account first shared this post. It circled the word "Edmonton" on the back of one of the firefighters in Lviv.

Minutes later, the same Telegram account shared the video in question with these words: "Explosions near Lviv or explosions from Edmonton crude oil tank farm in 2021?" This reshare from Telegram to Facebook is an example of how repackaged misinformation can jump from platform to platform.

On the same weekend, The Associated Press reported on what appeared to be the same fire and explosion at an "oil storage facility" in Lviv. The incident occurred on March 26:

LVIV, Ukraine — The governor of the Lviv region says a man was detained on suspicion of espionage at the site of one of the two rocket attacks that rattled the city on Saturday.

Maksym Kozytskyy said police found the man had recorded a rocket flying toward the target and striking it. Police also found on his telephone photos of checkpoints in the region, which Kozytskyy said had been sent to two Russian telephone numbers.

Rockets hit an oil storage facility and an unspecified industrial facility, wounding at least five people. A thick plume of smoke and towering flames could be seen on Lviv’s outskirts hours after the attacks.

As previously mentioned, there was a reason why some of the firefighters in the CNN video from Lviv had "Edmonton" written across their backs. CityNews Edmonton reported that Edmonton firefighters had donated some coats to Lviv. It also showed this post that confirmed the fact:

A separate 2021 fire and explosion in Edmonton that was referenced by conspiracy theorists was reported on by Global News in October 2021.

In sum, no, CNN did not air a video from a 2021 crude oil tank farm explosion in Edmonton to represent Lviv in 2022. Lemon reported live from an explosion in a war zone, and all of the footage was genuine.