Is This a 1992 Clinton-Gore Confederate Flag Campaign Button?

Campaign buttons for the 1992 Clinton-Gore national ticket bearing a Confederate flag background are of uncertain provenance. 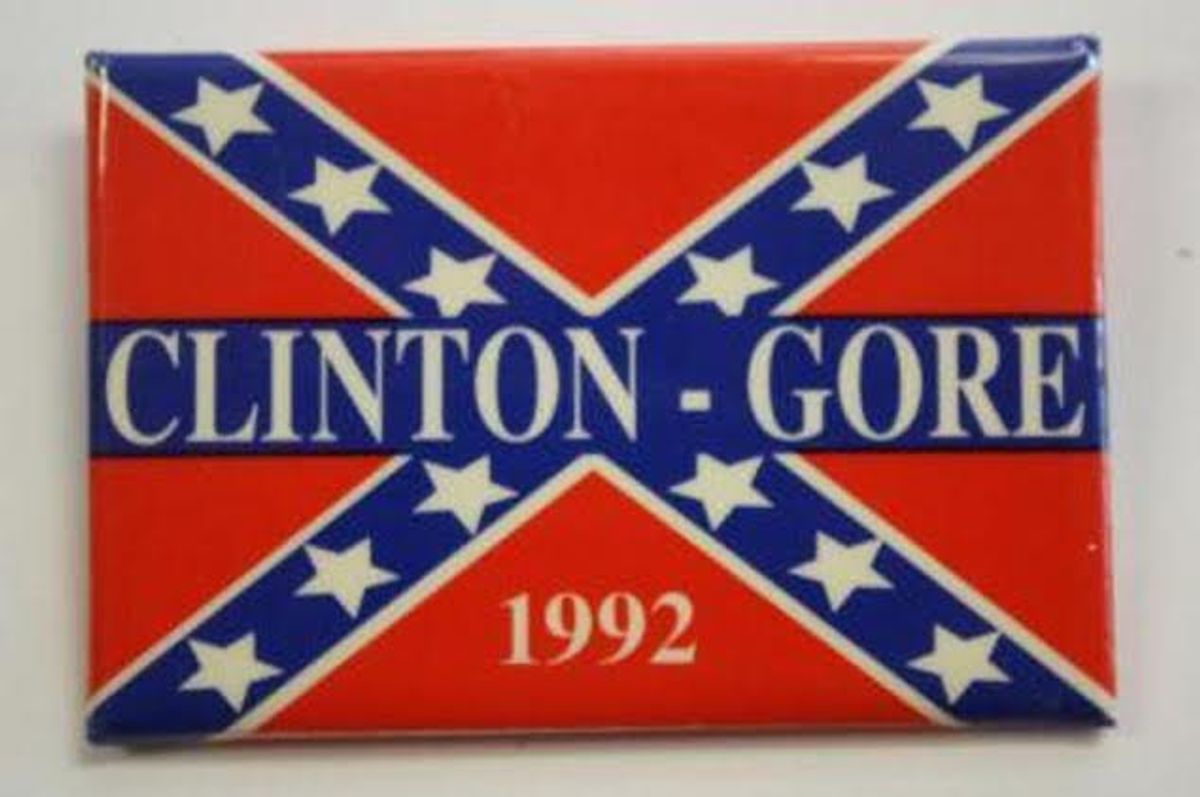 In June 2015, in the midst of a national controversy over the continued flying of a Confederate flag on South Carolina State House Building grounds (especially in the wake of a recent racially-motivated shooting at a South Carolina church that left nine people dead), images of a purported 1992 political campaign button began to pop up online. The button, supposedly from the victorious Clinton-Gore presidential ticket, was notable for using the Confederate battle flag as its motif (a tie-in to the fact that the two candidates hailed from the former Confederate states of Arkansas and Tennessee) Copies of the button were also offered for sale via the online auction site eBay.

However, solid evidence is lacking that the item seen above actually dates from 1992 and was authorized by the Clinton national campaign (rather than being a privately-made or other local item). A longtime Clinton aide and 1992 campaign operative asserted that the pictured pin not an official Clinton-Gore campaign button:

According to a longtime aide to former President Bill Clinton, the button was not an official campaign item.

Smith oversaw state operations for Mr. Clinton's campaign in 1992, before moving on to work in the Clinton White House. Among his responsibilities on the trail was allocating staff to states and sending out campaign materials, like house party kits, t-shirts, yard signs and buttons, nationwide. Every item, he said, had to be made in the United States by union workers.

"If it didn't have a union bug, we weren't making them," he said, "and we definitely weren't handing them out."

The button in question, and others featuring similar designs for sale or sold on eBay, does not show any indication of being union-made.

Smith said he thought the buttons were likely made by someone unaffiliated with the campaign looking to make a buck. He said if it had been pitched to him, it wouldn't have gotten past his desk.

It's important to note that there is no indicator that these buttons were actually made and distributed by the actual Clinton-Gore campaign.

One indicator that it isn't official is that it lacks a union "bug," the little marker showing that a piece of campaign material was printed in a union shop. If you look at other Clinton-Gore buttons, nearly all — but not all — have a bug somewhere.

In the 1980s and 1990s, buttons played part of the role that Etsy, Zazzle and Cafepress play now. Buttonmakers were never hard to come by, and anyone who wanted to could make his or her own, offering whatever sentiment they wanted to. So just because these buttons exist doesn't mean they were sanctioned or approved by the campaign.