A photograph of Hillary Clinton being kissed by Senator Robert Byrd has been widely circulated as a political statement. 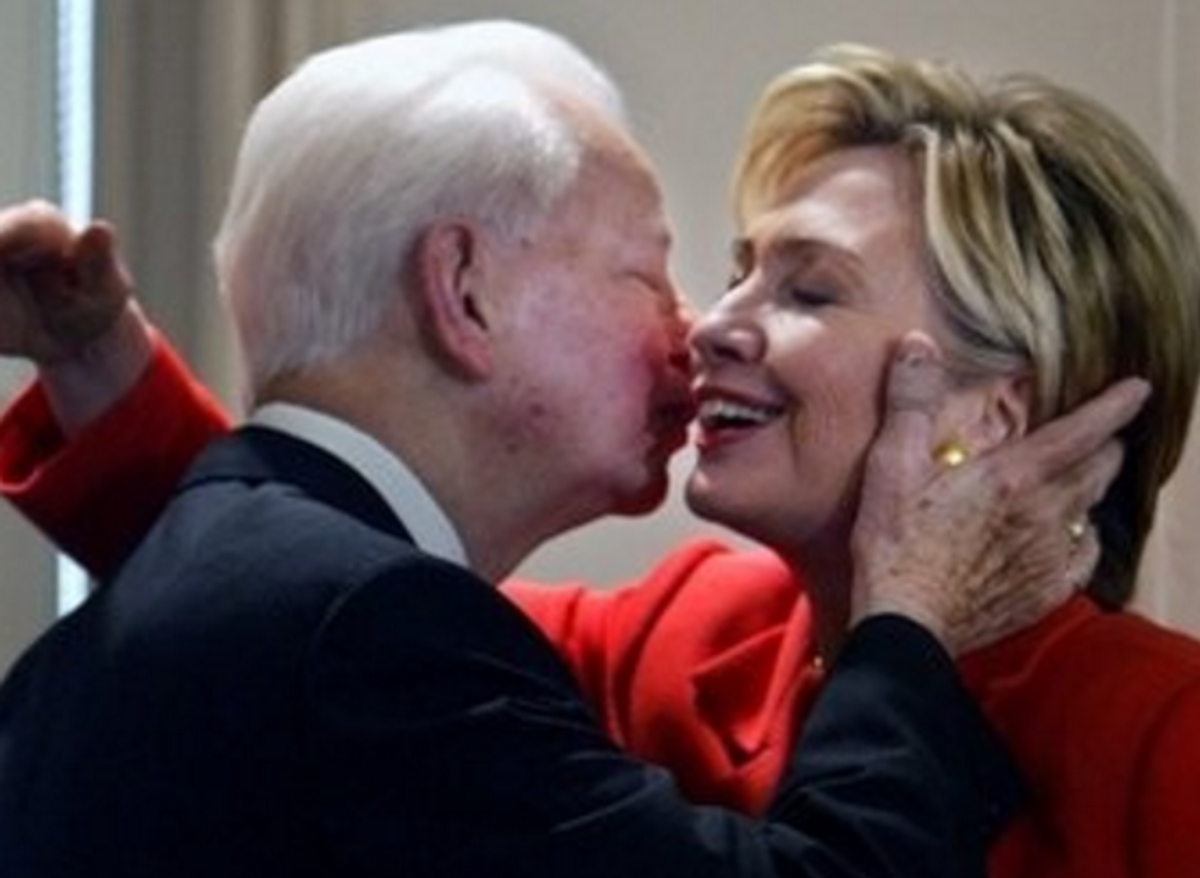 Shortly after Donald Trump declined to condemn David Duke and the Ku Klux Klan during an interview on CNN's "State of the Union" on 28 February 2016 (the Republican presidential candidate would later blame it on a faulty earpiece) a photograph purportedly showing Hillary Clinton with former Senator Robert Byrd of West Virginia, a former Ku Klux Klan member, was widely circulated online: The photograph was posted by numerous web sites along with articles arguing that the news media were being hypocritical in their coverage of Trump's purported connections to a white supremacist hate group, while making no mention of Hillary Clinton. The Daily Caller also published a video of Clinton praising Byrd's service in Congress:

In a video uploaded to the State Department’s official YouTube page on June 28, 2010, Clinton commemorated late Sen. Byrd by saying, “Today our country has lost a true American original, my friend and mentor Robert C. Byrd.

This photograph and video are undeniably genuine: The photograph was taken in July 2004, and the video of Clinton was filmed on 28 June 2010, shortly after Byrd's death.

It's also true that Robert Byrd was a member of the Ku Klux Klan in the 1940s and helped establish the hate group's chapter in Sophia, West Virginia. However, in 1952 Byrd avowed that "After about a year, I became disinterested [in the KKK], quit paying my dues, and dropped my membership in the organization," and throughout his long political career (he served for 57 years in the United States Congress) he repeatedly apologized for his involvement with the KKK:

"I know now I was wrong. Intolerance had no place in America. I apologized a thousand times ... and I don't mind apologizing over and over again. I can't erase what happened."

In 2010, even the NAACP released a statement honoring Senator Byrd and mourning his passing:

The NAACP is saddened by the passing of United States Senator Robert Byrd. Byrd, the longest serving member of congress was first elected to the U.S. House from [West Virginia] in 1952 and was elected Senator in 1958. Byrd passed away this morning at the age of 92.

"Senator Byrd reflects the transformative power of this nation," stated NAACP President and CEO Benjamin Todd Jealous. "Senator Byrd went from being an active member of the KKK to a being a stalwart supporter of the Civil Rights Act, the Voting Rights Act and many other pieces of seminal legislation that advanced the civil rights and liberties of our country.

"Senator Byrd came to consistently support the NAACP civil rights agenda, doing well on the NAACP Annual Civil Rights Report Card. He stood with us on many issues of crucial importance to our members from the reauthorization of the Voting Rights Act, the historic health care legislation of 2010 and his support for the Hate Crimes Prevention legislation," stated Hilary O. Shelton, Director of the NAACP Washington Bureau and Senior Vice President for Advocacy and Policy. "Senator Byrd was a master of the Senate Rules, and helped strategize passage of legislation that helped millions of Americans. He will be sorely missed."