Did Clinton Launch Airstrike on Iraq Amid Impeachment Proceedings?

Some drew comparisons to President Donald Trump's ordered airstrike that killed an Iranian general in early 2020. 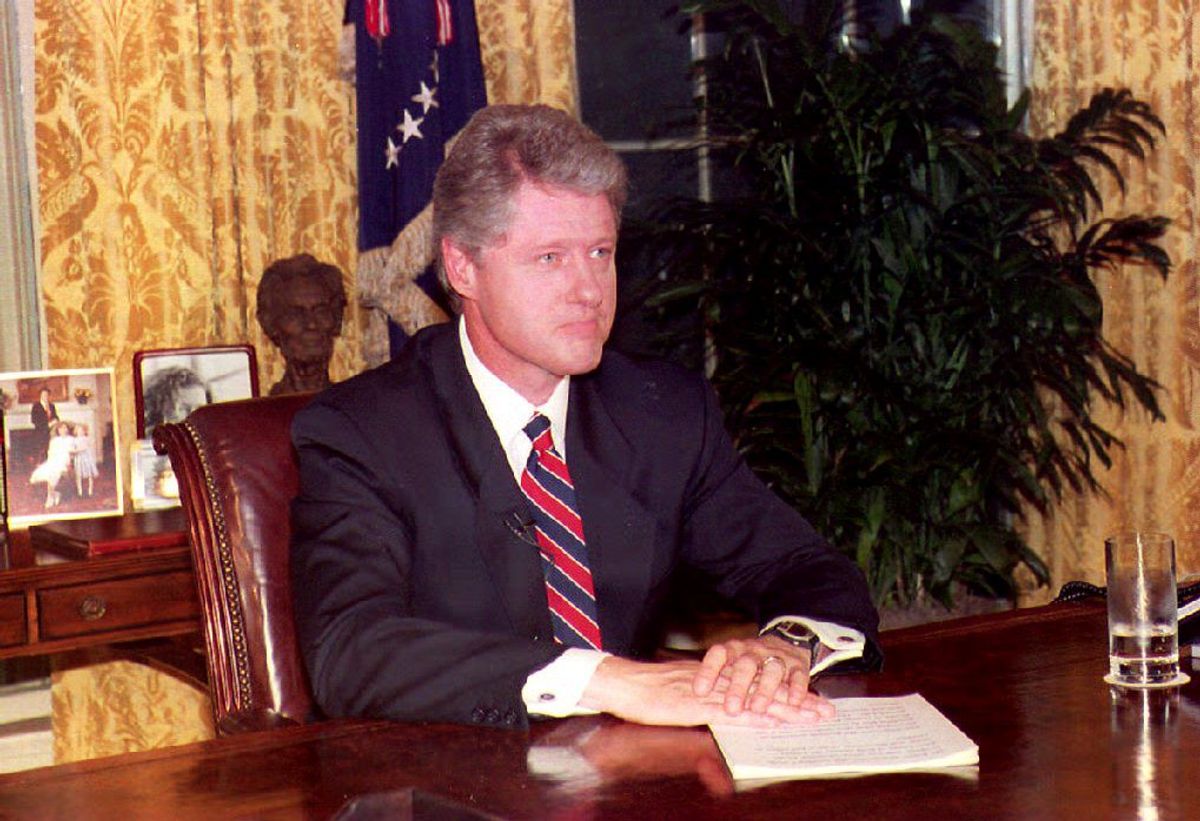 Claim:
U.S. President Bill Clinton launched an airstrike on Iraq amid impeachment proceedings against him in 1998.
Rating:

On Jan. 2, 2020, U.S. President Donald Trump ordered on airstrike at an airport in Baghdad that killed Iran's military general Qassem Soleimani (variant spellings of the name may appear in reporting by other news organizations):

A US drone strike ordered by President Donald Trump on a Baghdad airport has killed a top Iranian commander in a major escalation in regional tensions that have pitted Tehran against Washington and its allies in the Middle East.

The Pentagon on Thursday confirmed a strike killed Qasem Soleimani, who as head of the Islamic Revolutionary Guards Corps (IRGC) Quds Force became the architect of Tehran's proxy conflicts in the Middle East. The strike was carried out with a drone, a US defense official told CNN.

The following day, an image supposedly showing a newspaper clipping featuring a 1998 story published in The New York Times headlined "Impeachment Vote in House Delayed as Clinton Launches Iraq Air Strike, Citing Military Need to Move Swiftly" started to circulate on social media. This picture was widely shared by those who argued that Trump, like Clinton, was attempting to "wag the dog," a colloquialism that means "to distract attention away from a political scandal (in this case impeachment), often through military action." While the political motivations of Trump and Clinton are a matter of debate, this is a genuine newspaper clipping published in the Times on Dec. 17, 1998. This article is currently available online via the NYT Time Machine:

President Clinton ordered a ''strong sustained series of air strikes'' against Iraq today, defending the attack as unavoidable even as incensed Congressional Republicans charged that it was politically timed to stave off the pending resolution to impeach him in the House of Representatives.

"Iraq has abused its final chance," Clinton declared in an address to the nation Wednesday night as televised scenes from Baghdad reverberated with flashes of explosions and anti-aircraft fire.

Even as he spoke, House Republican leaders, yielding to the eruption in the Iraq crisis, postponed their plans to being the impeachment debate today.

"We're going to defer," said Speaker-designate Bob Livingston, in careful comments emphasizing support for the troops involved in the exercise.

While some may argue that Clinton was attempting to "wag the dog" by launching an airstrike on Iraq during impeachment proceedings against him, the strategy ultimately didn't work. Clinton was impeached just two days after the strike.

Trump, on the other hand, was already impeached when he ordered the killing of Soleimani. But the airstrike occurred the day before the U.S. Senate reconvened to begin discussing his impeachment trial.

We can't speak to Trump's political motivations — the Department of Defense released a statement saying that Trump ordered the attack as "General Soleimani was actively developing plans to attack American diplomats and service members in Iraq and throughout the region." But it may be worth noting that Trump has repeatedly argued that starting a war with Iran was one way to beef up political support before an election. In November 2011, for instance, Trump wrote on Twitter: "In order to get elected, @BarackObama will start a war with Iran."