"But in this footage, no one seems worried about being caught with their pants down." 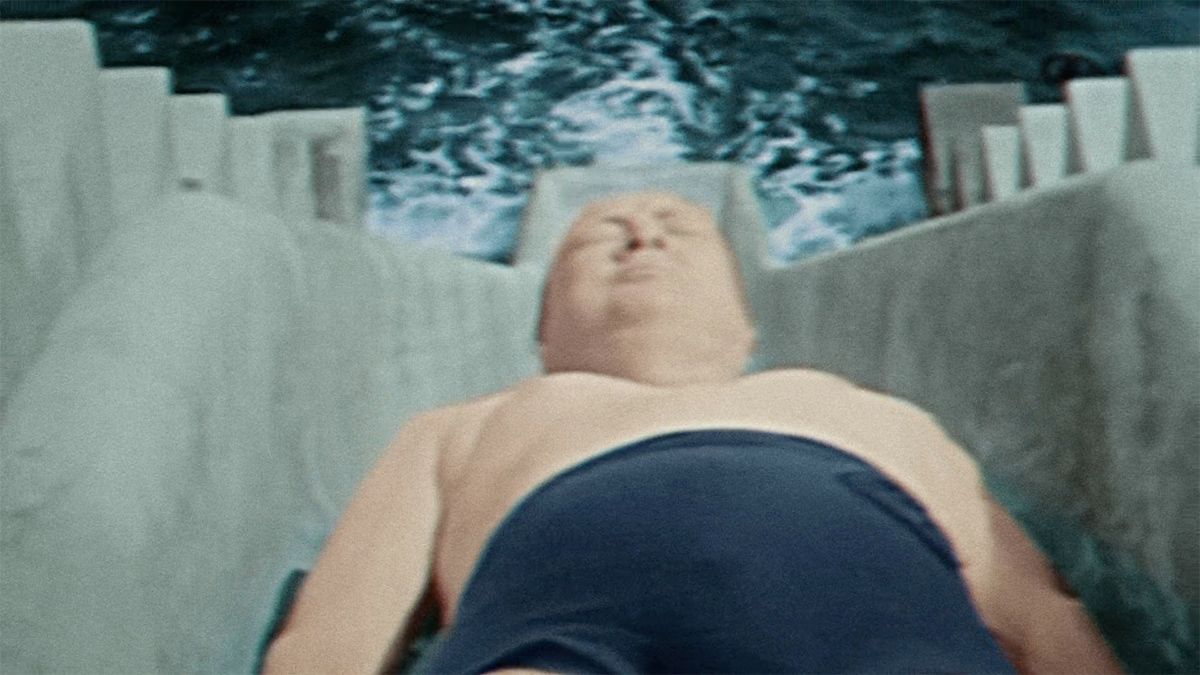 A video truly does show Winston Churchill losing his swimsuit after going backwards down a water slide. (Image Via Smithsonian Channel)

The video truly does show Churchill riding backwards down a water slide.

However, there's no evidence to support the claim that his swimsuit came off. The floating item that some believed to be his shorts appears to be a flat object he reclined on top of to go down the water slide.

On Oct. 12, 2022, Twitter user @fasc1nate tweeted a video from 1934 that appeared to show future U.K. Prime Minister Winston Churchill's swimsuit coming off after he went backwards down a water slide. The tweet was soon liked well over 130,000 times. A Facebook post, Reddit comments, and other online postings all had users who appeared to believe that the video showed Churchill's swimsuit coming off. While it's true that the video showed Churchill, it appeared that the floating item wasn't his swimsuit, but rather a flat object underneath him on the water slide.

In our effort to find the origins of this video, we first noticed the watermark at the top-right corner of the clip that read, "Smithsonian Channel UK." We soon found that the footage of Churchill on the water slide was broadcast in color during the Smithsonian Channel's 2019 TV series, "Britain in Color." Readers with a TV provider login can watch the water slide scene at the 18:10 mark during episode three of the first season. (The Daily Mail published these identifying details in June 2021.)

In the preceding scene, footage shows Churchill swimming at his own pool at Chartwell, his home in Kent. The National Trust published a page about the grounds of his former estate, including a picture of what the swimming pool looks like today.

After these moments are shown at Chartwell, the documentary moves on to more lighthearted moments, including a trip to the French Riviera. It was there that Churchill was filmed on the water slide.

Escaping to the French Riviera with family and friends, he starts writing a second book about the Great War. Randolph and daughter Diana join him. Another guest is aristocratic socialite Doris Castlerosse. Decades later, rumors circulate about both Winston and son Randolph having an affair with her. But in this footage, no one seems worried about being caught with their pants down.

The shot of Churchill on the water slide is shown during the narrator's "pants down" joke. However, the floating item in the water appeared to be not his swimsuit, but rather a flat flotation object he reclined on to go down the water slide. It's unclear if 1934 was the exact year the film was shot. Nevertheless, again, the video itself is real.

The International Churchill Society once published that the two-time prime minister learned to swim at a young age. He even decided to pay extra to ensure the pool at Chartwell was heated:

Churchill also enjoyed the rather more leisurely and less risky activity of swimming. He had learnt to swim when he was at ‘prep’ school and at Harrow he represented his house in swimming competitions. He continued to swim – or ‘bathe’ – regularly throughout his life, on holidays in the Bahamas, in the South of France. He even installed an outdoor swimming pool at Chartwell, heated – at vast expense – to combat the less-than-balmy English weather.

Aside from swimming, the society also noted that Churchill was "not often thought of as a sportsman," but that he was involved in several other activities, including polo, fencing, and hunting, to name a few.

On Oct. 14, 2022, this story was updated from "True" to "Mixture" after we noticed the object Churchill laid on to go down the water slide.