Was Chuck Norris at the Capitol Riot?

These photographs are real, but this person is not Chuck Norris. 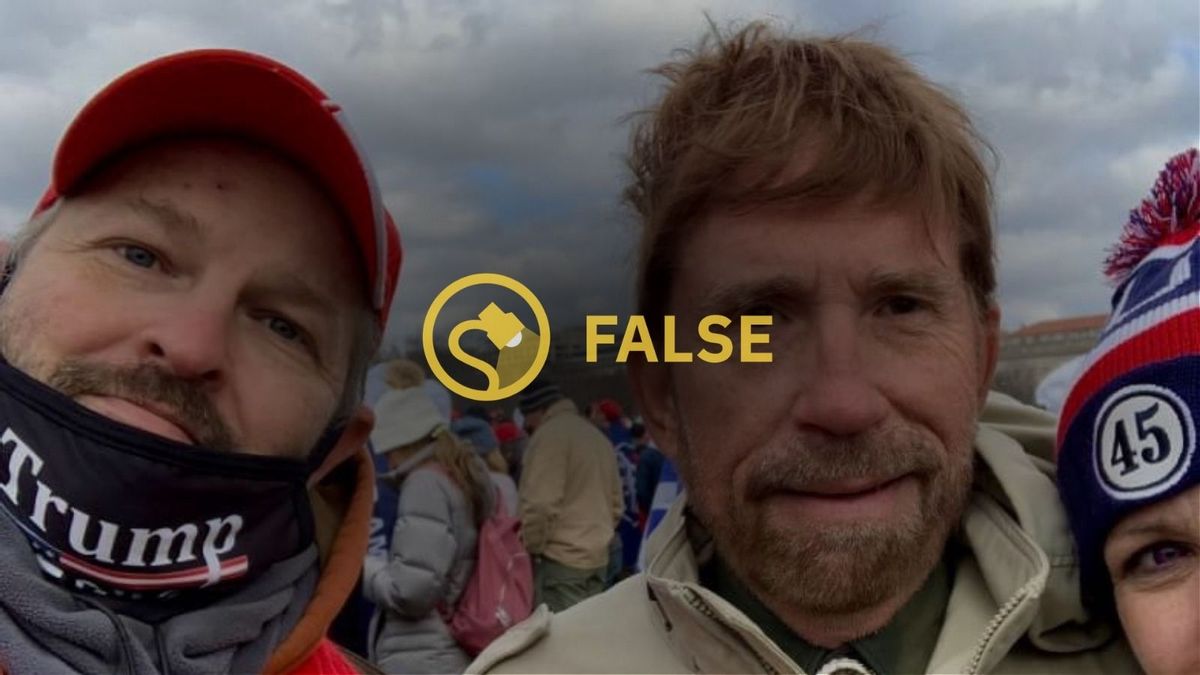 Claim:
A photograph shows actor Chuck Norris at a rally before the U.S. Capitol riot on Jan. 6, 2021.
Rating: This is a genuine photograph that was taken on Jan. 6, 2021. However, the person on the left of this image is not the "Walker, Texas Ranger" actor. Furthermore, it should be noted that this image was taken early on Jan. 6 at the "Save America" rally — not during the violence at the Capitol.

This image appears to have been shared on the the Instagram page of @theessentialmattbledsoe. While we have not been able to find this account (it seems to have been deleted), a video of this Instagram story can be seen here. Furthermore, this image is not the only one that showed this Norris lookalike at the rally. The man in these photographs does bear a resemblance to the "Walker, Texas Ranger" actor. However, when we compare this person to an actual image of Norris, it's clear that they are not the same person.  There appear to be some notable differences between the man in the viral image and the actor. For instance, the actor has blue eyes, but it appears that the man at the rally has brown eyes. The man at the rally also looks much younger than 80. Norris' manager Erik Kritzer told The Hollywood Reporter on Jan. 12 that “Chuck remains on his range in Texas where he has been with his family.” Kritzer added that while the two bore a passing resemblance, “Chuck is much more handsome.”

We took a look at Norris' social media accounts and found that the actor did not post any images of himself at the rally, nor did he post any messages in the lead up to this event about attending or encouraging others to attend. Norris did publish an opinion piece on Jan. 11 entitled "Dissent: The highest form of patriotism" on right-wing website WorldNetDaily that relayed some of his thoughts about the Capitol riot. But in reading that article, it seems clear that Norris was not in D.C. on the day of the riot.

My wife, Gena, and I wish to convey our heartfelt condolences to the families and friends of the Capitol police officer and other lives lost in the U.S. Capitol last week. Regardless of where you land in your politics, it is profoundly heart-wrenching these Americans died. We join the majority of Americans across our land in praying for a better and more united way forward for all of us.

Over the last few years, both those on the left and right have protested in big ways. They have also justified their legal and illegal actions, from peaceful protests to breaking into and seizing buildings, destroying private property and even causing physical harm.

At its core, the First Amendment clearly prohibits Congress from making any law hindering the right of the people to peaceably assemble for any of myriad of reasons, including protests. However, the framers drew a line between peaceful protests and armed insurrections.

Norris has voiced his support of Trump in the past. In November 2020, for instance, he published an article on WND entitled "Top 15 accomplishments of Trump's presidency" and urged his followers on Facebook to consider this article when they went to vote. However, Norris did not attend this rally.