A rumor claims pro-GMO bioterrorists sabotaged Chipotle's supply chain to retaliate against them for rejecting GMOs. 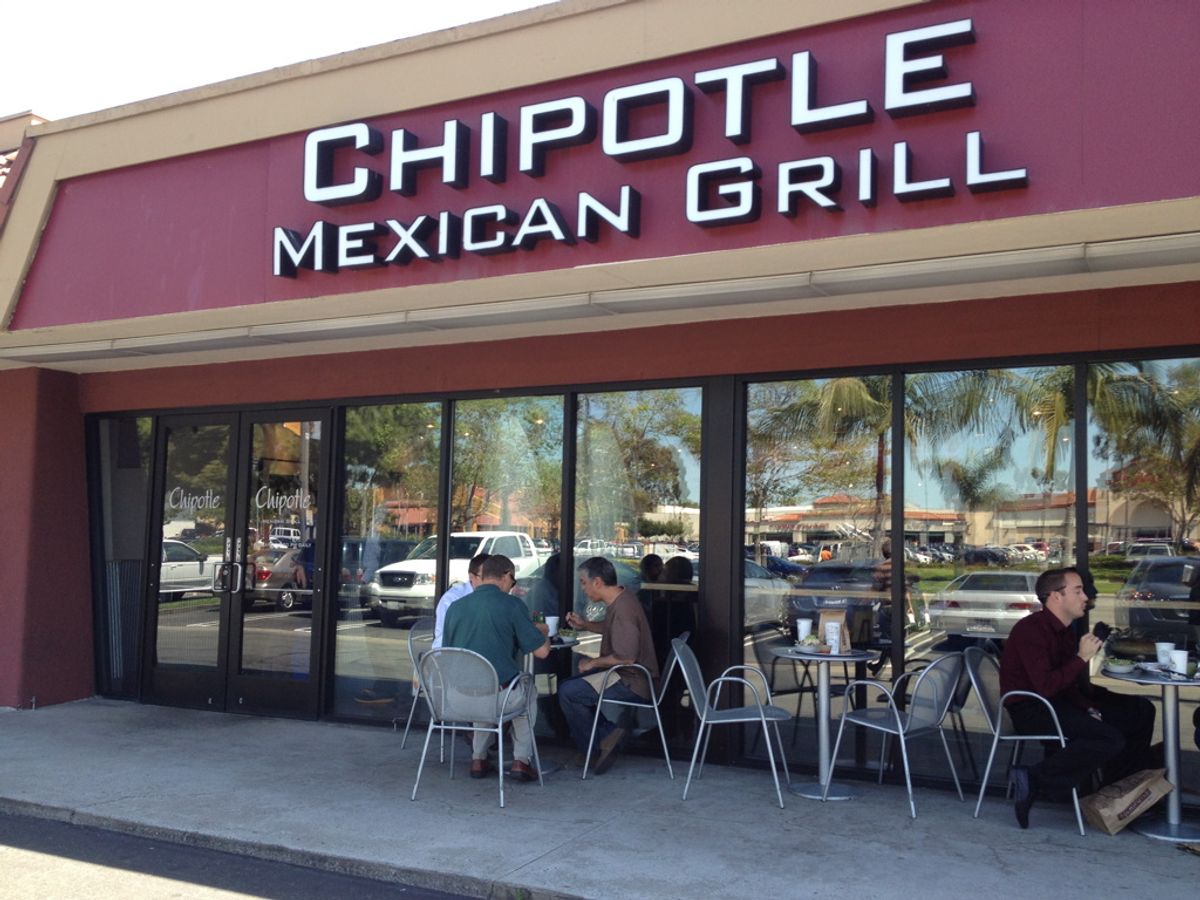 Claim:
Chipotle's 2015 outbreaks of foodborne illness were the work of pro-GMO bioterrorists.
Rating:

In late 2015, Chipotle outlets in multiple states were affected by an outbreak of foodborne illness, and as a result, the chain closed stores in several states while the issue was investigated. (The incidents also reinvigorated fake news rumors about Chipotle's using dog or cat meat in their food.)

After observing recent events involving Chipotle and e.coli, here's my analysis of the situation: Chipotle's e.coli outbreaks are not random chance. They are the result of the biotech industry unleashing bioterrorism attacks against the only fast food company that has publicly denounced GMOs.

How do we know? The CDC has already admitted that some of these e.coli outbreaks involve a "rare genetic strain" of e.coli not normally seen in foods. Furthermore, we also know the track record of the biotech industry engaging in the most criminal, dirty, sleazebag tactics imaginable against any person or company that speaks out against GMOs.

The article's sole attempt at presenting any evidence backing this extraordinary claim (aside from the presence of a "rare strain" of E. coli) was based on an entirely unrelated scenario involving surgeon, colon cleanse advocate, and television personality Dr. Oz, who once alleged (via an investigation carried out by Oz's "own team") that the chat show host had been defamed by pro-GMO propagandists:

Doctor Oz, for example, was maliciously targeted in a defamation campaign funded by the biotech industry earlier this year. The onslaught against Oz was initiated because he publicly expressed his support for honest GMO labeling on foods.

As the attacks escalated, Doctor Oz had his own team investigate the source of the attacks and found they were all biotech industry shills, some with felony criminal records and long histories of dubious propaganda activities targeting anti-GMO activists.

There is absolutely no question that the biotech industry will resort to ANY activity necessary to destroy food companies that oppose GMOs. And yes, this includes acts of bioterrorism against Chipotle — something that's ridiculously easy for biotech industry operatives to carry out with simple, low-cost laboratory supplies sold online at places like Amazon.com.

To be clear, what's really happening at Chipotle is that biotech industry shills are deliberately contaminating Chipotle's food with strains of e.coli in a malicious attempt to destroy both the reputation and finances of the Chipotle food chain. This act of bioterrorism is entirely consistent with the known behavior patterns of the biotech industry which, for example, engaged in illegal money laundering in Washington state in order to destroy the GMO labeling bill there.

An axiom commonly dubbed "Hitchens' Razor" maintains "that which can be asserted without evidence can be dismissed without evidence." Even if that concept didn't apply here, entertaining Adams' claims remains difficult.

Aside from a lack of any actual proof, the article did not offer the manner by which such "corporate sabotage" might have occurred, did not identify and specific parties by whom the misdeeds might have been carried out, did not explain how only foodstuffs destined for Chipotle outlets might have been contaminated, did not posit why the putative saboteurs would have left an obvious trail by using a "rare genetic strain of e.coli not normally seen in foods" (rather than a more common form of e.coli), did not detail how "low-cost laboratory supplies" purchased via Amazon would assist in such an endeavor (nor why corporate saboteurs wouldn't be better funded), or explicate what the primary objective of causing such outbreaks might be.

While it might seem plausible to those who fear anti-GMO activists are at risk from shadowy forces, no linear motive for such activity was presented in the article — it simply suggested that nebulous biotech terrorists wished to create havoc due to a grudge over an anti-GMO stance.

We contacted Chipotle for a comment on the rumor, which a representative confirmed they'd heard and stated:

While no cause has been determined for this, we are actively working with the Food and Drug Administration and the Centers for Disease Control and Prevention to investigate. If there is a silver lining in not knowing for sure what caused this, it's that it prompted us to look at every ingredient we use with an eye to finding ways to improve food safety and food handling practices throughout our system — from the farms that produce the ingredients we use, to our restaurants where we serve our customers. The result of that assessment is an enhanced food safety plan that will help establish Chipotle as a leader in food safety. You can see more about that on our website here.

The chain's statement gave no indication that sabotage by corporate interests or any other entities was a cause under scrutiny in their ongoing investigation (although later news reports indicated that Chipotle had been served with a federal subpoena as part of a criminal investigation tied to a norovirus outbreak at one of their restaurants).

Had the article provided any details whatsoever about how such "Chipotle sabotage" might have been planned and carried out, it would be easier to determine the veracity of a such a claim.  However, the sole point of evidence offered was that pro-GMO activists were supposedly once mean to Dr. Oz (who is himself a purveyor of dubious medical information) and offered no explanation for how that sentiments translated into pro-GMO saboteurs causing food-borne illnesses among Chipotle customers in several different states.