Does This Photograph Show 26 'Corrupt' Politicians Executed by China?

Not a picture of 'corrupt' politicians or an execution, although some of the latter followed afterwards. 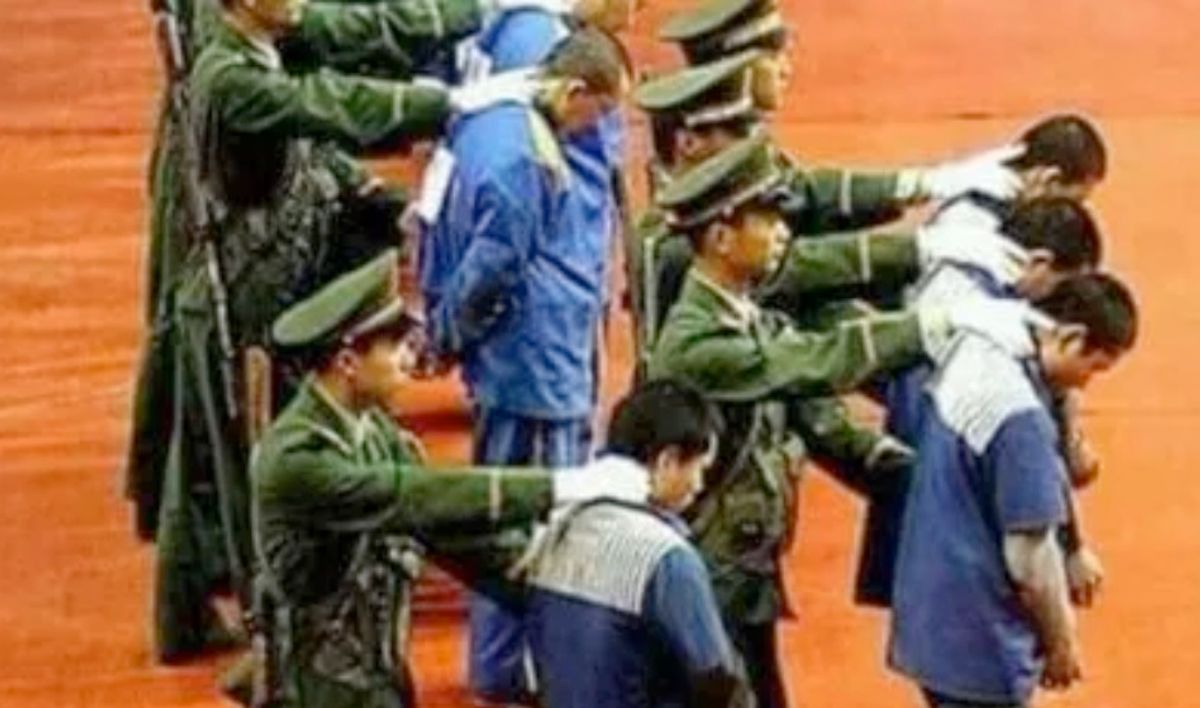 Claim:
A photograph shows 26 corrupt politicians shortly before they were executed in China.
Rating:

In September 2018, a number of social media accounts started sharing a photograph purported to show 26 'corrupt' Chinese politicians moments before their execution: This photograph was not recent in 2018, it did not feature corrupt politicians, and it was not taken during the course of a public execution.

This photograph was snapped in Wenzhou, China, in April 2004 and shows Chinese police officers escorting a group of "hardcore convicts" at a "sentencing rally." This picture is available via Getty Images where it is accompanied by the following caption:

WENZHOU, CHINA: Chinese police show of a group of hardcore convicts at a sentencing rally in the east Chinese city of Wenzhou, 07 April 2004, where 11 prisoners were later excuted for various crimes. Amnesty International has called for a moratorium on the death penalty in China, saying the country's dysfunctional criminal justice system meant many innocent people were being executed, after a senior Chinese legislator suggested China executes at least 10,000 people a year, about five times more than the rest of the world combined. AFP PHOTO (Photo credit should read STR/AFP/Getty Images)

We attempted to find more information about the crimes committed by the pictured individuals but were unable to uncover news about this specific incident. We suspect that the majority of people seen in this photograph were convicted of drug trafficking offenses, as the China Daily reported in June 2004, two months after this photograph was taken, that dozens of drug dealers had recently been executed in the country, with some of them having been sentenced in Wenzhou:

Dozens of drug dealers were sentenced to death in a series of drug-related criminal cases across China as the International Day Against Drug Abuse and Illicit Trafficking draws near.

In southwestern Yunnan province, Tan Minglin and three other people convicted of smuggling or selling five tons of drugs, including heroin and ephedrine, were executed after having all their belongings confiscated.

Another Chen Xue'an and three other suspects accused of illegally purchasing 60 kg of drugs by raising over four million yuan (US$481,000) were sentenced to death in Wenzhou city of east China's Zhejiang province.

A contemporaneous report from Amnesty International stated that China "easily operates the most stringent capital punishment regime" and that the the country had executed an estimated 3,400 people in 2004:

The report says China easily operates the most stringent capital punishment regime, with an estimated 3,400 executions last year. In second place, Iran executed at least 159, Vietnam at least 64, and 59 prisoners were put to death in the US.

The number of executions worldwide last year was the highest since 1996, when 4,272 were carried out.

No official figures are available for China's execution rate, and Amnesty has changed the method it uses to calculate the number of executions there. According to Amnesty's report for 2003 China carried out at least 726 executions. The much higher figure of 3,400 executed last year is an estimate based on internet reports of trials, although it is still described as the "tip of the iceberg".

China was still at the top of Amnesty International's annual report on capital punishment in 2018.