Was a Chinese Company Set to Buy General Electric in 2021?

A Facebook meme shared widely in late 2020 and early 2021 asked American readers, "Are you concerned yet?" 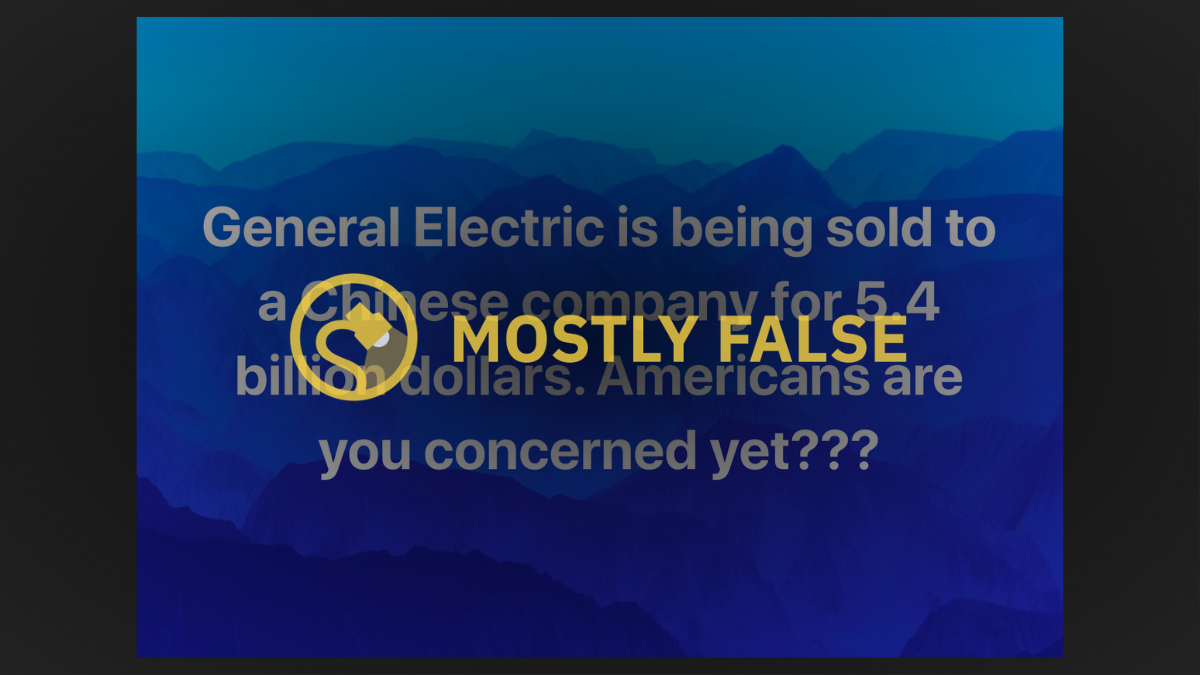 No announcements or reliable reports existed of a forthcoming deal, in 2021, to sell General Electric as a whole to any Chinese company. The Haier deal took place several years before the viral Facebook meme in question.

In late 2020 and early 2021, multiple Snopes readers asked us to examine the accuracy of a viral Facebook meme that claimed a Chinese company was set to purchase General Electric for a sum of $5.4 billion. The post, published by Hal Downing on Dec. 23, 2020, read:

General Electric is being sold to a Chinese company for 5.4 billion dollars. Americans are you concerned yet??? The warning "Americans, are you concerned yet?" appears to be a reference to the imminent inauguration of President-elect Joe Biden in January 2021, and a slew of baseless conspiracy theories that allege sinister connections between Biden and China.

Several other Facebook posts by Downing demonstrate a belief that: "Democrats are owned by China"; that Biden's elevation to office will represent a moment of calamity for the United States; and that Democrats committed treason by "colluding" with China by deploying millions of fraudulent, Chinese-made ballots in order to secure Biden's victory.

In reality, we found no record of any announcement, or reliable news report, of a deal to sell General Electric (GE) to any Chinese company in 2021. Rather, the figure of "5.4 billion dollars" refers to the sale of GE's appliances division to the China-based company Haier.

That sale was announced in January 2016 and completed in the summer of 2016 — before that year's U.S. presidential election took place, and long before Biden had even announced his intention to run for president four years later.

That sequence of events fatally undermines the broader suggestion that Biden's presidency will "open the floodgates" for aggressive Chinese involvement in the American economy, as part of an underlying, sinister relationship between Biden and the Communist Chinese regime.

Furthermore, the Chinese company in question bought one of GE's divisions, not the entire entity — an additional, highly significant inaccuracy in the widely shared meme.