Are Americans Receiving Unsolicited Mailings of Seeds from China?

Numerous U.S. residents have reported receiving seeds in the mail from China that they did not order. 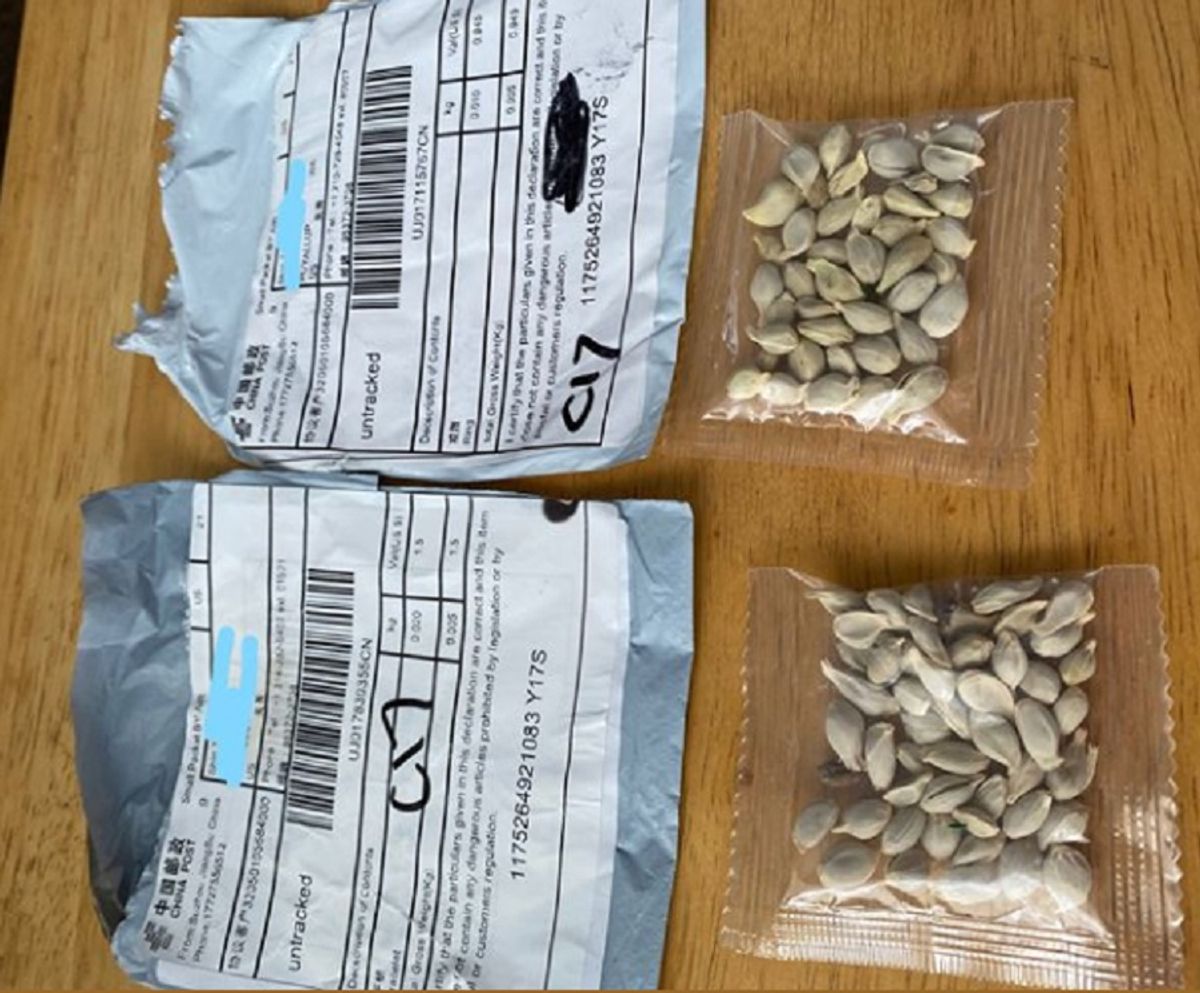 Numerous residents in the U.S. (and UK) have reported receiving unsolicited packages of seeds in the mail with return addresses indicating they were sent from China.

The precise motive behind these mailings, and whether or not it is a malicious one, is not yet known.

In July 2020, social media users began circulating a warning from the Washington State Department of Agriculture about people in the U.S. receiving unsolicited mailings of seeds sent from China (sometimes in packages identifying the contents as jewelry), which included a caution for recipients not to plant any seeds so received and to report them to the United States Department of Agriculture (USDA) as instances of agricultural smuggling:

Today we received reports of people receiving seeds in the mail from China that they did not order. The seeds are sent in packages usually stating that the contents are jewelry. Unsolicited seeds could be invasive, introduce diseases to local plants, or be harmful to livestock.

Here's what to do if you receive unsolicited seeds from another country:

2) This is known as agricultural smuggling. Report it to USDA and maintain the seeds and packaging until USDA instructs you what to do with the packages and seeds. They may be needed as evidence.

This warning corresponded to multiple other governmental alerts and news accounts about persons in the UK and multiple states of the U.S. having received such unsolicited mailings. The Virginia Department of Agriculture and Consumer Services (VDACS), for example, issued a similar warning to residents of that state:

The Virginia Department of Agriculture and Consumer Services (VDACS) has been notified that several Virginia residents have received unsolicited packages containing seeds that appear to have originated from China. The types of seeds in the packages are unknown at this time and may be invasive plant species. The packages were sent by mail and may have Chinese writing on them.

Please do not plant these seeds. VDACS encourages anyone who has received unsolicited seeds in the mail that appears to have Chinese origin to contact the Office of Plant Industry Services (OPIS) at 804.786.3515 or through the ReportAPest@vdacs.virginia.gov email.

Invasive species wreak havoc on the environment, displace or destroy native plants and insects and severely damage crops. Taking steps to prevent their introduction is the most effective method of reducing both the risk of invasive species infestations and the cost to control and mitigate those infestations.

A number of Utah residents have been surprised with a peculiar package in their mailboxes -- a parcel filled with seeds and Chinese writing on the outside.

"I opened them up and they were seeds," said Utah resident Lori Culley, who found her package with Chinese characters, plus a label stating there were earrings inside. "Obviously they're not jewelry!" she said.

Culley, who lives in Tooele, thought it may be a case of a mistaken address, but when she posted about it on social media she found "at least 40" local residents had gotten similar packages in the past few weeks.

There are regulations as to which plants and seeds can be imported into and sold in Utah. Since the delivery, a representative from the Utah Department of Agriculture picked up Culley's seeds to have them tested. The department may also get assistance from Customs and Border Protection agents to investigate the mysterious seeds.

Less certain is the purpose behind the mailings. Explanations from drug smuggling to attempts to trick Americans into planting harmful invasive species have been mooted, although a somewhat different motive has also been suggested: "Better Business Bureau's Jane Rupp has another theory. She thinks it could simply be a scam relating to customer reviews, in which companies post low-cost items so they can write fake reviews for their business in a resident's name."

As U.S. News & World Report explained, the "Fake Listing Scam" is employed by disreputable sellers on sites such as Amazon.com, as they attempt to build up false reputations as reliable vendors in order to facilitate luring victims to their scams:

[T]here have been some cases of criminals buying their own products and shipping it to a real address. The con artist then writes a fake review, purportedly from the buyer the product was shipped to. Why does the thief go to the trouble? To make it look like a "verified" review, since the review came from a "buyer" who bought the product.

"Amazon is continuously developing algorithms to automatically detect these merchants, but it also relies on consumer awareness," [Kevin Lancaster, CEO of ID Agent] says. And what really can throw people off is that sometimes these con artists build up a couple months of legitimate sales, making a con artist's products appear reputable, Lancaster says. "People buy from the fake listings, and instead of receiving a product in a few weeks, the scammer has already made off with the money," he explains.

At this juncture it appears true that the mysterious mailings of seeds sent with return addresses in China are real, but the specific motive behind them is as yet unknown.