Did Bing Confirm China Would Invade the USA?

TikTok videos purported that the Bing search engine was displaying news that said China was planning to invade the U.S. and engage in war from 2020-2025. 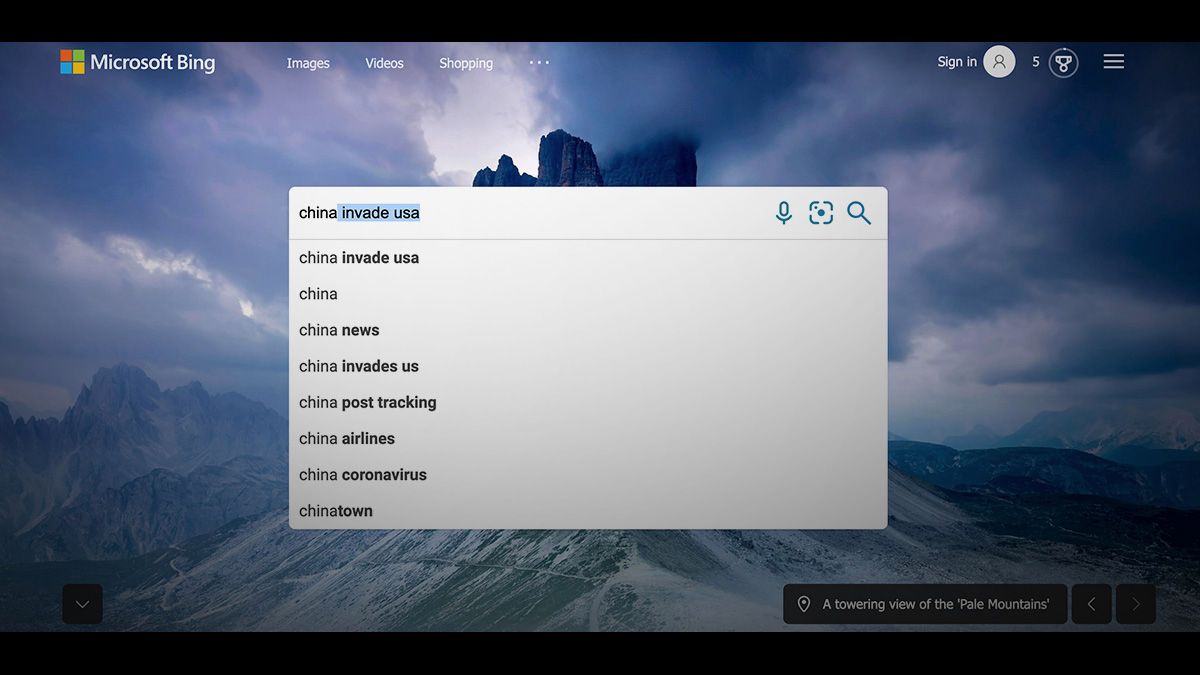 Claim:
Bing.com confirmed that China was planning to invade the United States.
Rating:

Beginning in December 2020, conspiracy theorists published TikTok videos that warned the Microsoft search engine, Bing.com, had confirmed an upcoming and successful Chinese invasion of the United States. In the videos, TikTok users directed viewers to visit Bing.com to type in "China invade USA" (without quotes). The videos showed a snippet result on the right-hand side called "Invasion of the U.S. Mainland," apparently scheduled for 2020-2025 with a "Red Chinese victory." It's true that entering the text "China invade USA" (without quotes) on Bing.com will bring up the result seen in the image above.

However, the snippet on the right titled "Invasion of the U.S. Mainland" was not a confirmation or prediction of war by Bing.com, nor was it a news story. The embedded content was nothing more than a search engine results preview of fiction writing from the Future section of the website Fandom.com.

The fictional story began with an August 2020 invasion of Alaska:

Invasion of Alaska and Canada

The chaotic situation in the US mainland after the surprise Electro Magnetic Pulse (EMP) attack provided excellent opportunities for further Chinese expansionism, US military forces is in disarray with the whole US power grid knocked out American strategic nuclear forces were paralyzed leaving the whole US mainland open to invasion.

China saw Alaska as a stepping stone for its conquest of the US with its limitless supply of raw materials, its manufactured goods, and as a protective staging ground against Canada and the rest of the United States.

We previously reported on a very similar story that claimed Chinese troops were amassed in Canada and were planning to invade the U.S. That rumor was also false.

The fictional story from Fandom.com claimed that 30,000,000 American civilians would die in an upcoming war, and that 7,350,000 U.S. military members would die. It also said that Chinese leaders would join forces with North Korean leader Kim Jong Un and Russian President Vladimir Putin. Some 5,000,000 soldiers were said to die China's side of the war from 2020-2025. Again, all of this was a work of fiction.

The story ended without the Chinese being able to claim a "decisive victory":

By 2025 China had occupied much of Midwest and the west coast of the former United States, but the US provisional central government and military had successfully retreated to the eastern interior to continue their resistance, while the American guerrillas remained in control of base areas in the Appalachian mountains . In the occupied areas, Chinese control was mainly limited to highways as well as railroads and major cities . They did not have a major military or administrative presence in the vast American countryside, where American guerrillas roamed freely. This stalemate situation made a decisive victory seem difficult to the Chinese.

In short, "China invade USA" was not a special way to find top secret information, nor was it a key to find out what will happen in the future.