Is This a Photograph of a Children's Concentration Camp in the U.S.?

Debate continues over how temporary holding facility and processing centers for undocumented migrant children should be described. 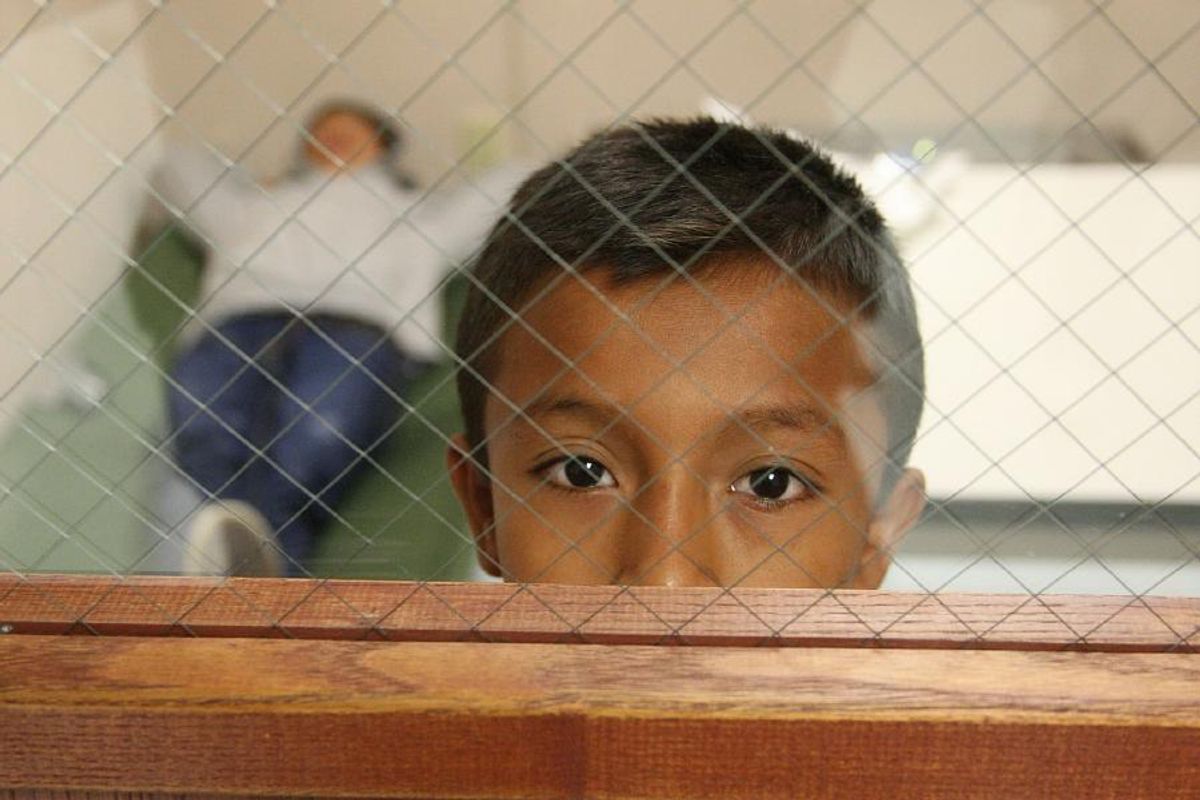 Claim:
A photograph shows a 'kids' concentration camp' in the U.S.
Rating:

In May 2018, a photograph of two children sleeping inside a fenced enclosure was widely circulated via social media with accompanying text stating that it pictured a "kids' concentration camp" in the U.S.: This photograph dates from 2014 (during the Obama administration) and was not directly related to a mid-2018 controversy over Trump administration policy of separating children from undocumented migrant parents at the U.S. border. The picture was one of several that accompanied an Arizona Republic article about a detention center for undocumented migrant children in Nogales, Arizona.

What this photograph depicts is not a "concentration camp" as the term is most commonly used (i.e., a facility where "political prisoners or members of persecuted minorities are deliberately imprisoned in a relatively small area with inadequate facilities, sometimes to provide forced labor or to await mass execution") but rather a temporary holding facility/processing center for undocumented children who were apprehended entering the U.S. by Customs and Border Protection (CBP) during the height of an unprecedented surge of child migration from Central America that took place in 2014:

They are undocumented. They entered the country illegally. And when they were apprehended by U.S. Customs and Border Protection, they were shipped to Nogales from overwhelmed processing facilities in Texas.

But they are still children in cages, not gangsters, not delinquents. Just children, 900 of them, in a makeshift border-town processing center that is larger than a football field. They pass the day sitting on benches or lying side by side on tiny blue mattresses pressed up against each other on nearly every square inch of the floor in the fenced areas.

Some might argue that the pictured facility was in fact a detention center where children were held in conditions that were woefully inadequate for their numbers, and thus it was concentration camp-like in those aspects:

In essence, it is a juvenile prison camp.

The children, mostly of high-school and junior-high-school age, are housed behind 18-foot-high chain-link fences topped with razor wire.

Nylon tarps, tied to the fences, provide a modicum of privacy between the groups. They share the kind of portable toilets used at fairs and construction sites, placed inside the cages and vented with clothes-dryer hoses.

There is an occasional frisbee or stuffed animal. One pregnant teen in the older girls' area sat with her back against the fence, holding her belly. Muted televisions blink incongruously, hanging from overhead beams.

But most of the children lie motionless on side-by-side mattresses with looks of intense boredom on their faces. Inevitably, given the number of people, it smells of feet and sweat and straw, giving it the look and feel of the livestock areas at the State Fair.

However, others maintained that -- despite the difficult conditions -- the facility was not comparable to a concentration camp in that the children kept there were treated humanely, were provided with medical care, and were held only until they could be placed with relatives or other caretakers pending adjudication of their cases:

[The children] are fed and clothed, kept clean and cool, far better off than if they were walking through the desert in June temperatures.

The Nogales facility is a way station where the children are identified, examined for health problems by the U.S. Public Health Service, vaccinated and then moved to other facilities in Texas, Oklahoma and California until they are placed with relatives already in the country to await their day in Immigration Court.

[A] tour dispelled rumors of ill treatment. The CBP agents in the building seem to be genuinely compassionate in their interactions with the children. The facility is clean and air-conditioned.

Still, in 2016 the conditions of similar detention facilities were being described as "deplorable":

Although [Texas] detention centers had been used long before [2014], that year the Obama administration made them key to its immigration policy. [The center in] Dilley was built that year, and Karnes was greatly expanded. Immigration advocates fought back, and last year in the Federal District Court for the Central District of California, Judge Dolly Gee made a ruling that helped their case. In her decision last July, the judge said the centers were in “deplorable” condition, and that they failed to meet even minimal standards. Gee pointed to a 1997 ruling that determined the government cannot treat a child in detention as it would an adult. She ordered the Obama administration to release the migrant kids from both Texas centers.

That didn’t happen. The Obama administration appealed, and for the past year has tried to figure out how to get around the ruling

Debate continues about how undocumented migrant children who come to the U.S. (whether alone or with their parents) should be dealt with, and where and how they should be housed until their status has been resolved. No approach is likely to satisfy critics at both ends of the political spectrum.