Did a Child with Asthma Die After Parents Switched to Essential Oils as Treatment?

A popular cautionary tale about a child dying after his asthma medication was swapped for essential oils has not been corroborated. 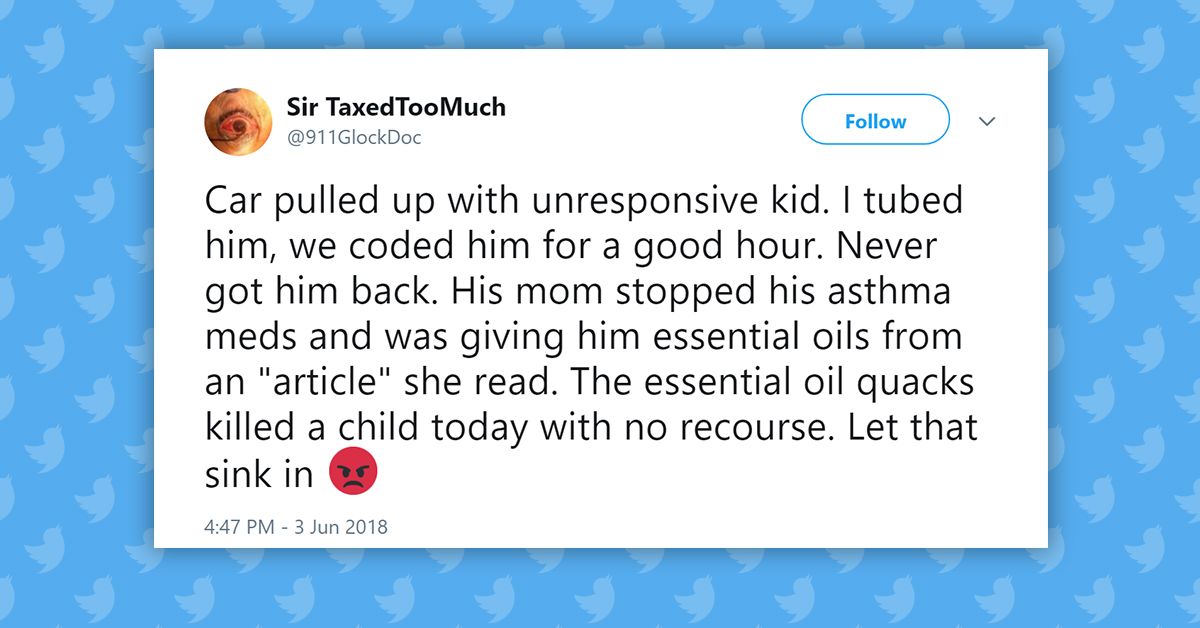 Claim:
A child died in June 2018 because his parents used essential oils to treat his asthma.
Rating:

On 3 June 2018, a Twitter user relayed a story about an asthmatic child who purportedly died when his parents substituted unspecified essential oils for asthma medications:

Car pulled up with unresponsive kid. I tubed him, we coded him for a good hour. Never got him back. His mom stopped his asthma meds and was giving him essential oils from an "article" she read. The essential oil quacks killed a child today with no recourse. Let that sink in ?

Screenshots of the tweet circulated independently on other social media platforms, such as Facebook and Reddit (multiple times.) The Twitter user who first shared the claim regularly tweets about purported interactions and incidents in an unidentified emergency room.

Others commented on the tweet asking for corroborating information, sometimes suggesting that if a child died in the described manner that the incident would be at least locally newsworthy:

I wonder why I can't find anything to back up this story? I mean, a story like this would make the news. I am totally anti-woo, but I am also totally against spreading lies to 'help' our cause. A kid allegedly died. I hope this is what I suspect it is: A lie.

Although the story proved popular, the author did not respond to requests for additional information, whether from media outlets or users looking for the article referenced in the tweet. They did not provide a specific location or any back story, although earlier tweets indicated that the poster might live or work in the Atlanta area. Previous Twitter-related tales of hospital horrors have gone similarly unverified (likely due at least in part to privacy laws.) A 2015 blog post written by a physician tackled the same topic, but his post did not mention any deaths.