Does Photo Show Lice Sores on Chicken at Walmart?

Raw chicken is rarely pretty, but that doesn't mean there is something wrong with it. 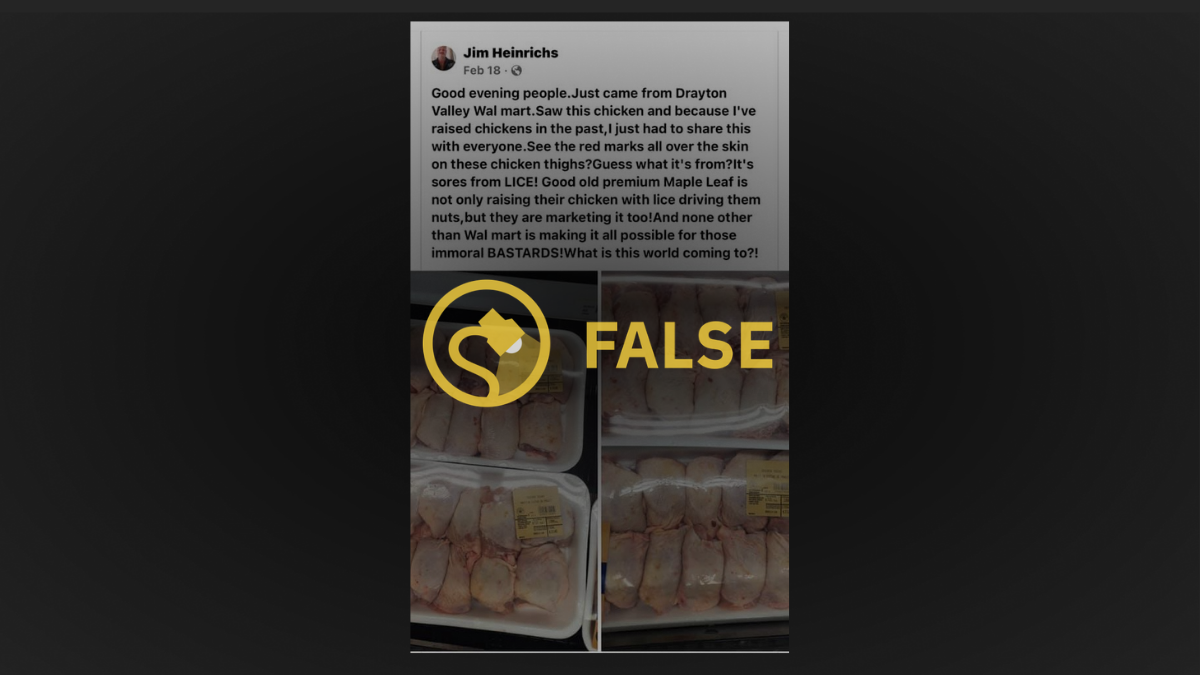 In early 2021, images shared to social media purportedly showed chicken thighs sold at a Walmart store that were rife with “sores from lice.”

The claim appeared to have originated with Jim Heinrichs, who shared the below post on Feb. 18, 2021. Screenshots of the claim went viral thanks to users who shared the content in the generic “repost” format without linking directly to the original post or citing any sources. Snopes contacted Maple Leaf Foods, the producer and distributor of the chicken, who confirmed that the product depicted in the image is distributed throughout Canada, including a Walmart in Drayton Valley. A representative for Walmart confirmed to Snopes that the product is not, however, sold in any U.S. stores.

Snopes sent the image to Janet Riley, a spokesperson for Maple Leaf Foods, who said it was reviewed by the company’s food safety team. “We are confident that the red spots on the chicken thighs in the photo shared on social media are common and harmless blood spots or meat particles that can be transferred onto chicken during the processing of the chicken, or slight skin color differences,” said Riley. “These chicken products are safe, wholesome and government inspected, and claims that lice are present are simply untrue.”

Janeal Yancey, a meat scientist at the University of Arkansas, also confirmed that the red spots featured in the photo were not the result of poultry lice. For one, lice are “teeny-tiny parasites” whose bite marks or infestation would not leave a mark so big. Secondly, lice are a warm-weather parasite prevalent in hot, humid climates — not a poultry farm in Canada in the middle of winter. And lastly, commercial chicken meat comes from birds known as “broilers,” birds raised specifically for meat and harvested when they are less than two months old.

“Lice is extremely rare in commercial poultry and in these broilers, it’s even rarer because those birds are pretty young,” said Yancey.

Red markings resulting from blood spots or meat particles like those seen in the photograph are also rare because commercial chicken meat often goes through what is known as water chilling. As its name suggests, this process uses chilled water to cool the chicken meat before packaging and in doing so, often washes away any sort of residue left over from slaughter. The chicken in the picture was “air chilled,” and Riley noted that air chilling has a tendency to magnify the appearance of skin imperfections that occur naturally or from processing and can also magnify blood spots.

“In addition, the product is sealed in a packaging film that presses directly onto the product, and products are stacked on top of one another,” she added. “The packaging and the weight can further magnify imperfections like blood spots and skin imperfections.”

Riley also confirmed that the Canadian Food Inspection Agency (CFIA) is present at the plant where the chicken was processed and inspects every load of live chickens that arrive to ensure that they are in good health before processing and onsite during the processing. As seen in the photo, the product bears the mark of the CFIA inspection, which indicates that it complied with Canadian food safety regulations.

“There have been no concerns raised by our inspectors about bird health, food safety, or quality issues in this plant,” said Riley.

Correction [March 22, 2021]: "Broilers" was incorrectly spelled "boilers" in an earlier version of this article.