Did Chick-fil-A Just 'Drop a Bomb' on Black Lives Matter?

Employees at a single Chick-fil-A location wore "Back the Blue" shirts long before the July 2016 "Black Lives Matter" protests. 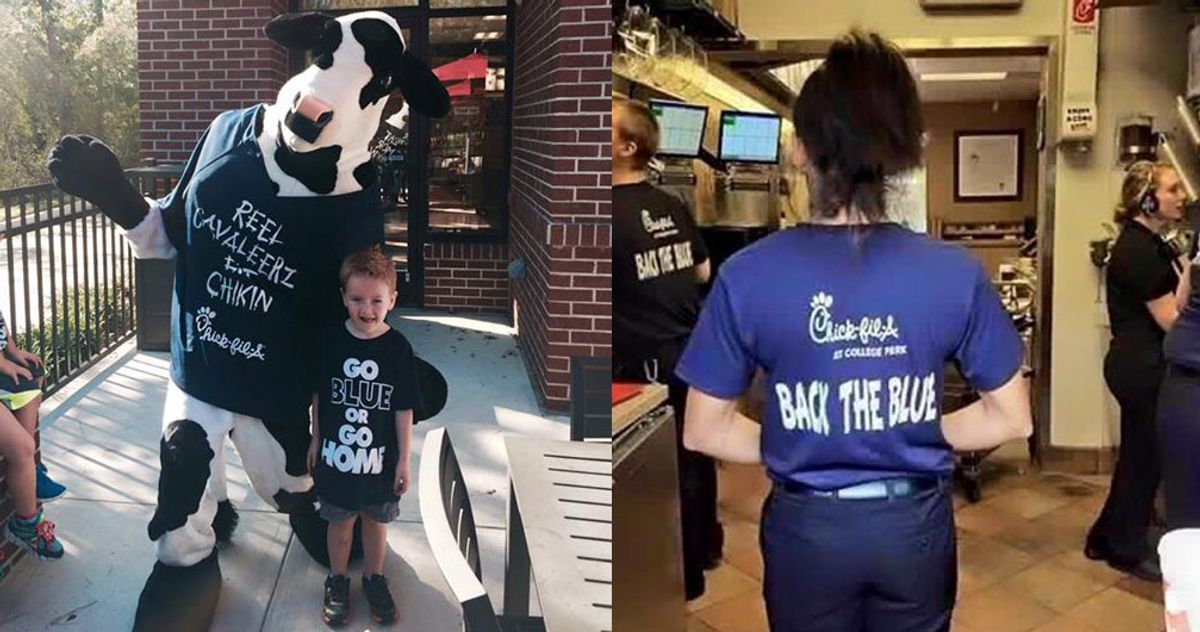 Two days after the 7 July 2016 shootings at a Black Lives Matter protest in Dallas that killed at least five police officers, multiple web sites published items reporting that Chick-fil-A had essentially "chosen a side" in both the protests against police brutality and the Dallas tragedy that resulted from it: According to reports, Chick-fil-A allegedly unveiled "Back the Blue" shirts in July 2016 in response to events in Dallas:

It’s not too often a large company like Chick-fil-A gets involved in a controversial topic, but they have thrown themselves right smack in the middle of the Black Lives Matter movement with a statement that has millions of people talking across the country.

Blue Lives Matter is a movement that counters BLM by encouraging citizens to support police officers that put their lives on the line every single day for citizens across the country. Police officers are here to protect citizens and will do so regardless of color, as long as you cooperate and obey the law.

To show support for law enforcement, Chick-fil-A has unveiled their “Back The Blue” t-shirts.

Nearly every version of the popular tale was written from a standpoint that presumed that people either opposed police officers or the Black Lives Matter movement: However, the claim about Chick-fil-A introducing "Back the Blue" shirts in response to events in July 2016 was easily disproved. In November 2015, the pro-law enforcement web site PoliceOne reported that the shirts were worn at a single Texas location of the chicken chain, and that event took place in October 2015, well before the July 2016 Dallas protest:

Employees at the College Park Chick-fil-A wore "Back the Blue" shirts to show support to law enforcement, Independent Journal reported.

"We’re supporting those everyday heroes that protect us," location manager Eli Advincula told the publication. "There are [police officer] regulars that eat here all the time, and we just want them to know that.”

The PoliceOne report linked to an article identifying the shirt-wearers as being in Conroe, Texas. We contacted Chick-fil-A corporate to ask whether the shirts were created in 2016, and whether they were a chain-wide issue, and a representative told us that the shirts were the work of high school employees of Chick-fil-A and that they were worn at a single location in Texas in October 2015.

On 14 July 2016, a representative for Chick-fil-A clarified to us that the shirts were never meant as a reference to police officers:

During high school football season last year, one locally owned restaurant in Houston, Texas created t-shirts for the sole reason of supporting its local football team. However, when asked, the local manager also made a statement in support of the local first responders, as we have a history of honoring them for their public service. The shirts have nothing to do with the current national discussion. Chick-fil-A restaurants are committed to serving everyone delicious food while creating a welcoming environment for anyone who walks through our doors.