Did a Boy at Chick-fil-A Ask to Pray with Police Officers?

According to the story, a little boy ran up to three officers at a Chick-fil-A restaurant and asked to pray with them. 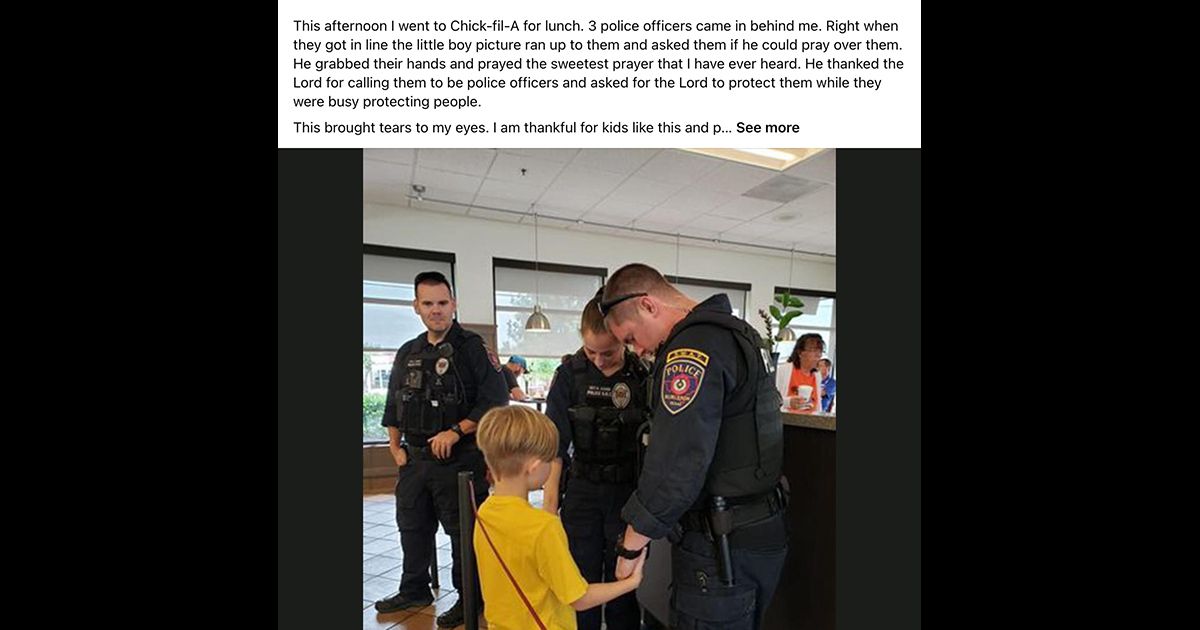 A Facebook post said a little boy asked to pray with police officers at a Chick-fil-A in Burleson Texas.

Claim:
A little boy asked to pray with three police officers at a Chick-fil-A restaurant in Burleson, Texas.
Rating:

This story was first posted to Facebook in 2019. It was later reposted by multiple accounts in March 2022 with the same words, "This afternoon I went to Chick-fil-A for lunch." This may have left the impression with some readers that it had just happened.

"This afternoon I went to Chick-fil-A for lunch." These words began several popular Facebook posts in March 2022 that we found were outdated. The copypasta (copy-and-paste) posts purportedly showed a picture of a little boy who asked to pray with three police officers at a Chick-fil-A restaurant.

We found no evidence that this story about a little boy asking to pray with police officers at Chick-fil-A was fake. However, we did note that it was quite old. The fact that this story was not new may not have been apparent to users since the posts began in the first-person speaking style, as if the person making the post just went to the restaurant:

This afternoon I went to Chick-fil-A for lunch. 3 police officers came in behind me. Right when they got in line the little boy picture ran up to them and asked them if he could pray over them. He grabbed their hands and prayed the sweetest prayer that I have ever heard. He thanked the Lord for calling them to be police officers and asked for the Lord to protect them while they were busy protecting people.

This brought tears to my eyes. I am thankful for kids like this and parents that encourage it. ❤️

The credit at the end to Kimberly Clark Stone referred to the original poster of the story. According to the date on Stone's post, the picture of the little boy who asked to pray with police officers at Chick-fil-A was captured on Oct. 24, 2019.

Stone included the following hashtags with the post: "#burleson #burlesonpolicedepartment #chickfila #chickfilasouthburleson #backtheblue." These hashtags referred to the Burleson Police Department in Burleson, Texas. We reached out to the department to see if it had anything to add to the story and will update this fact check if we hear back.

In sum, yes, this was the story of a little boy who asked to pray with police officers at a Chick-fil-A restaurant in Burleson, Texas. However, it happened in 2019 and was not something that just happened.

We previously published a number of other fact checks about Chick-fil-A. Those topics include its Sunday closure policy, a lawsuit about its long drive-thru lines, and a popular company phrase, to name a few.