Did Chicago Police Tweet 'We Are All Derek Chauvin'?

The former Minneapolis police officer was found guilty in the killing of George Floyd, a Black man. 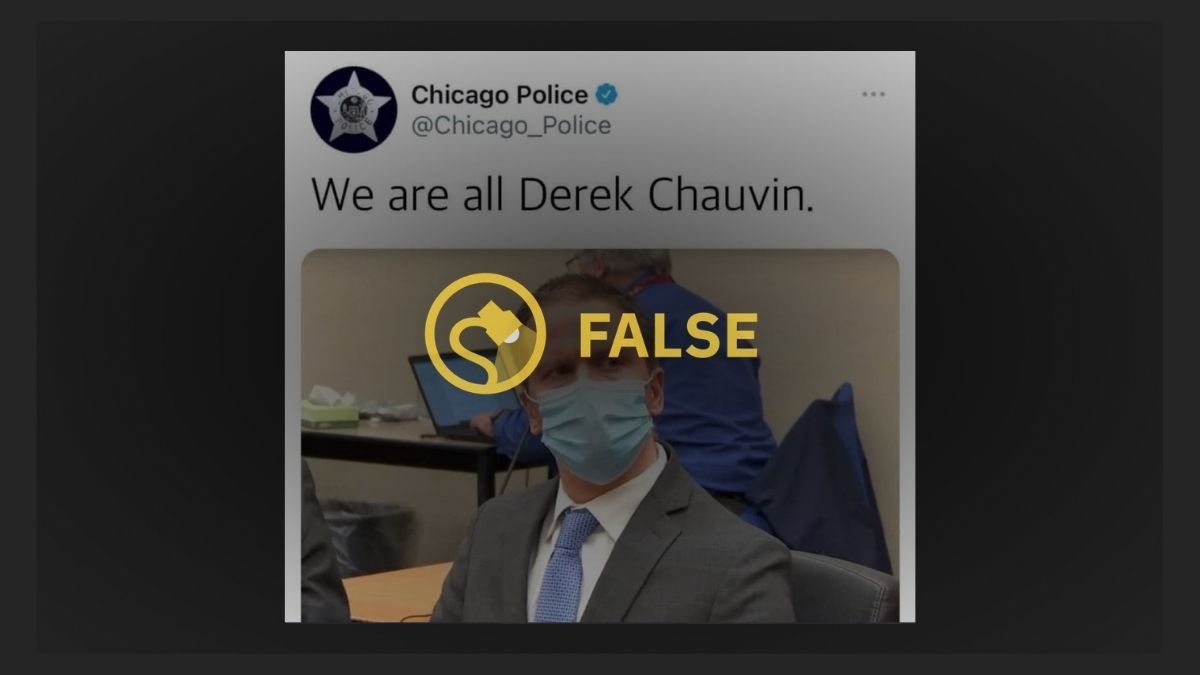 Claim:
Chicago Police’s official Twitter account tweeted, “We are all Derek Chauvin,” alongside a picture of the former officer in the courtroom where he was convicted on April 20, 2021.
Rating:

On April 20, 2021, former Minneapolis police officer Derek Chauvin was convicted of murder and manslaughter charges in the killing of George Floyd, a 46-year-old Black man whose death sparked a global reckoning over racism and police brutality.

On April 21, 2021, a number of accounts on Twitter shared a screenshot of a tweet purportedly sent out by the official account of the Chicago Police. The tweet allegedly said, “We are all Derek Chauvin,” alongside a picture of Chauvin from his conviction hearing. We found no evidence of this tweet having been posted to the Chicago Police Twitter account -- and no examples of the shared post included a link, just a supposed screenshot of the tweet (always a red flag). Also, the font and font size of the text in the image is suspiciously not the same as typically seen on Twitter. We also looked for evidence of a tweet that could have been deleted by the account, and found none.

Most of our searches directed us back to this widely shared tweet from an account called @FreyjaErlings, which was retweeted thousands of times.

We have reached out to the Chicago Police as well and will update this post if we get any more information.

On April 26, the Chicago Police's official Twitter account released a statement denying that they ever tweeted this:

Given that this appears to be an image digitally edited to look like a real tweet, and we could find no reputable sources to corroborate the claim that Chicago Police made such a controversial statement, we rate this claim as “False.”