Is This 'Chemistree' Picture Real? 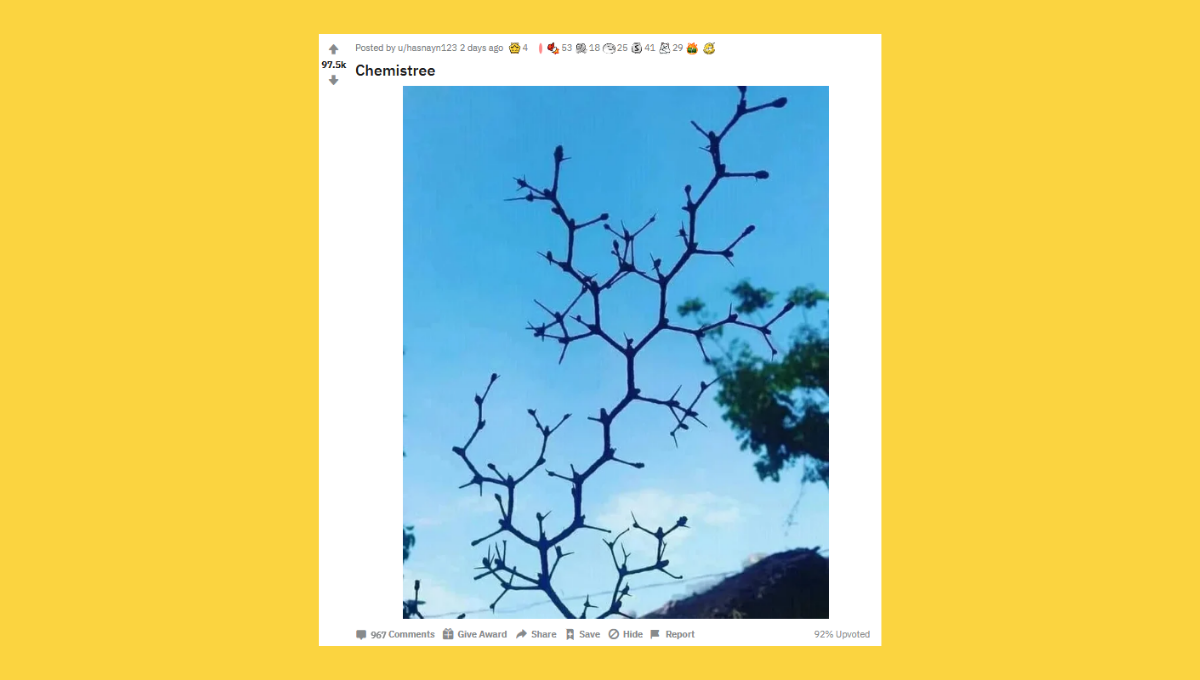 In December 2020, a picture of a seemingly oddly shaped branch was widely circulated on social media along with the punny title "chemistree": Many viewers appeared skeptical that this was a genuine photograph. For starters, one of the earliest and most popular postings of this image was shared to r/LSD, a section of Reddit dedicated to the hallucinogenic drug Lysergic Acid Diethylamide, along with comments about how the branch resembled the chemical structure of the drug. This, in turn, led some to believe that the picture of the branch had been edited to better resemble the chemical structure of LSD:

Other social media users seemed to think that the hexagonal shapes of this branch were too unnatural to be real. As the image started circulating under the punny "chemistree" title, it appeared, once again, that this picture was digitally edited with the intent of scoring internet points.

We have not been able to source this particular image, but we don't see any reason to believe that this "chemistree" was photoshopped. In fact, this branch doesn't seem all that unusual. Hexagons may have the appearance of being humanmade, but these six-sided shapes are widely found throughout nature, such as in the honeycomb of a beehive or the symmetrical shape of a snowflake. Several plants can also grow in seemingly oddly shaped formations.

We reached out to the U.S. National Arboretum for help identifying this branch. While we haven't been able to identify this tree species with absolute certainty yet, we have come across a few likely contenders. The Sophora prostrata, or dwarf kowhai, for instance, has angular branches similar to the ones in the above-displayed picture.

Before we show you an image of the dwarf kowhai, it should also be noted that the lighting in the viral picture makes it difficult to discern any depth. This branch appears, more or less, to be two-dimensional, with all of the branches moving at angles equidistant to the camera. In reality, however, it's likely that the branches' offshoots are moving slightly toward and away from the camera. In July 2020, the non-profit organization Trees For Canterbury, shared an image showing a branch of this "little twister" :

Here's another picture of the dwarf kowhai: While the branch in the viral "chemistree" picture may belong to a dwarf kowhai, this tree is native to New Zealand. If this picture was snapped in the United States, it's possible that it shows a spiny black olive (Bucida spinosa), a tree that grows in warmer climates, like the Caribbean, Hawaii, or Florida. Here's an eerily similar photograph of a spiny black olive tree branch that was posted to Flickr by Jenny Evans in 2008: While we have not been able to positively identify the "chemistree" branch, it isn't out of the ordinary for trees and plants to have angular branches. The viral picture most likely shows a poorly lit photo of a  spiny black olive (Bucida spinosa) tree.