Is the Accused Charlottesville Killer an 'Anti-Trump Leftist' Supported by Clinton, Soros?

Various right-leaning sources immediately — and inaccurately — identified the driver of the vehicle that plowed through a crowd of counter-protesters in Charlottesville as a "radical leftist." 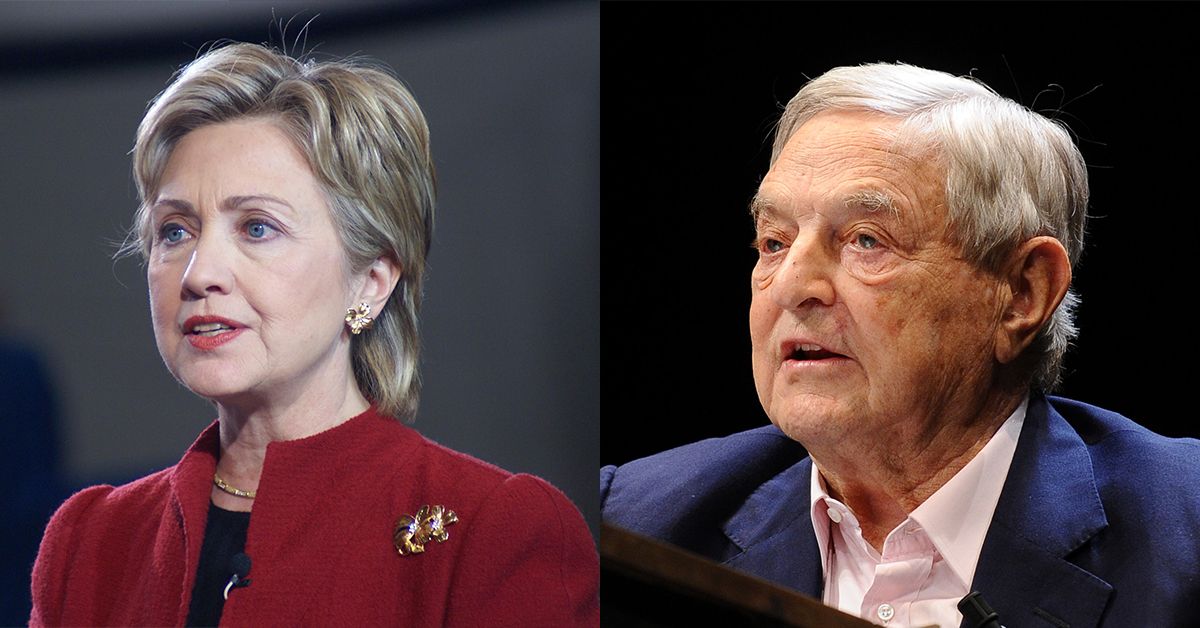 Claim:
The driver of the vehicle that killed one person and injured more than a dozen others at the Unite the Right rally in Charlottesville, Virginia, is a known "radical leftist" supported by Hillary Clinton and George Soros.
Rating:

Days after a 12 August 2017 neo-Nazi rally in Charlottesville, Virginia — in which a white supremacist mowed down a group of counter-protesters with a car, killing one and injuring dozens — various right-leaning web sites published reports claiming that the driver was actually a left-wing, Hillary Clinton-supporting Democrat.

We do not yet know very much about 20-year-old James Alex Fields Jr. of Maumee, Ohio, but such evidence as we have places him squarely in the camp of Charlottesville protesters who marched under the white nationalist banner. One of Fields' former high school teachers, Derek Weimer, told the Cincinnati Enquirer that the young man's political views were extreme and flavored with Nazism:

Weimer said that he knew of Fields’ political leanings early on. He said another teacher filed a report during Fields’ freshman year over something Fields had written for an assignment "that just went beyond the pale."

"It was very much along the party lines of the neo-Nazi movement," Weimer said.

Photos taken earlier on the day of the attack show Fields standing shoulder-to-shoulder with members of Charlottesville's Vanguard America, wearing the group's standard uniform and holding a shield with their logo, the fasces:

According to the Anti-Defamation League (ADL), the basic tenets of Vanguard America's philosophy are as follows:

Vanguard America (VA) is a white supremacist group that opposes multiculturalism and believes that America is an exclusively white nation. Using a right-wing nationalist slogan, Blood and Soil, VA romanticizes the notion that people with “white blood” have a special bond with “American soil.” This philosophy first originated in Germany (as Blut und Boden) and was later popularized by Hitler’s regime. In the same vein, VA uses “For Race and Nation” as a variant slogan. Following this theme, VA maintains that America “is to be a nation exclusively for the White American peoples who out of the barren hills, empty plains, and vast mountains forged the most powerful nation to ever have existed."

All of the above notwithstanding, the unreliable web site YourNewsWire.com declared that the mainstream media were "suppressing" proof that the vehicular attacker was "a left-wing operative at the heart of a false flag designed to spark civil war, introduce martial law, and take away the rights of conservative groups to assemble peacefully":

The man accused of being a neo-Nazi and murdering a woman by deliberately driving into her during protests in Charlottesville is in reality a supporter of Hillary Clinton and member of Antifa in receipt of funding by George Soros, according to reports.

James Fields, 20, of Maumee, Ohio, allegedly killed Heather Heyer, aged 32, and injured 19 others when he rammed his car into a group of protesters on Saturday in Charlottesville, Virginia.

Mainstream media is claiming Fields is a neo-Nazi and has conveniently produced photographs showing Fields standing with Vanguard America and carrying a shield bearing the group’s insignia.

Another right-leaning web site, Freedom Daily, didn't mention Fields at all, blaming the attack instead on an "Antifa terrorist" involved in a left-wing "false flag" conspiracy:

Although it was originally reported that the driver of the car was a far right sympathizer it’s now been confirmed that it was indeed a Democrat Party member and Antifa terrorist drove his car into free speech advocates in Charlottesville Virginia this morning.

It is common for revolutionary groups such as Antifa to use methods like this to implicate their enemies in order to evoke violence and start a civil war, which is what they have been working towards since Donald Trump won the presidency in November of 2016.

Neither site has a leg to stand on. YourNewsWire provided no evidence that Fields was a "left-wing operative." Freedom Daily joined Gateway Pundit, Alt Right Real News, GotNews.com, and other reliably unreliable sources in regurgitating misinformation put out by Internet "sleuths" who blithely fingered an innocent teenager for the crime. These sites accused Joel Vangheluwe (who turned out to be the son of a former owner of the attack vehicle) of being the Charlottesville killer: Vangheluwe, who is from Macomb County, Michigan, has been the target of death threats since these web sites named him, according to local news reports:

A Macomb County businessman and his family are living in fear after his teenage son was falsely rumored to have been the driver who plowed a car into a crowd protesting a white supremacist rally in Virginia.

Jerome Vangheluwe of Bruce Township said his son was incorrectly identified by several right-wing websites as being the owner and driver of a Dodge Challenger that rammed through counter-protestors Saturday, killing a woman and wounding at least 19 others.

Vangheluwe says even though he sold the car years ago, the family was being targeted for death threats from people mistakenly believing the son, Joel, was responsible for the horrific act.

The Michigan State Police responded to the threats against Vangheluwe by affirming that there is no known Michigan connection to the Charlottesville attack:

.2) Local media if you are contacted by other outlets there is not a Michigan connection that we are aware of at this time.

Some of the sites that got it so egregiously wrong — Gateway Pundit, for one — quietly deleted their erroneous posts and moved on without issuing corrections or retractions. Others, such as GotNews.com, published corrections — and then congratulated themselves for doing so. Freedom Daily updated their page to identify the right suspect, but perpetuated their "leftists did it" scenario by claiming the driver lost control while trying to "escape" anti-fascist demonstrators who were allegedly throwing things at his car, and never meant to hurt anyone (a claim directly contradicted by Charlottesville's police chief, who described the vehicular attack as "premeditated").

All these reports dovetail into a grander conspiracy theory peddled by InfoWars founder Alex Jones and his ilk, exemplified in the rambling, hour-long video rant below, part of an InfoWars.com post entitled "Virginia Riots Staged to Bring in Martial Law, Ban Conservative Gatherings". In brief, Jones claims that the violence in Charlottesville is but one example of a well-orchestrated plot by billionaire leftist George Soros, former Democratic presidential candidate Hillary Clinton, the Southern Poverty Law Center (SPLC), "globalists," the "deep state", Jewish actors pretending to be neo-Nazis, and God only knows who else to foment unrest, start a race war, bring down President Trump, and pave the way for martial law in the United States:


We listened in vain for Jones to provide any evidence for these claims beyond vague references to WikiLeaks e-mails in which highly placed Democrats supposedly discussed "controlling" the populace by keeping them "in the dark" and "desperate":

Now, if you go back to the WikiLeaks from over a year ago, the Democratic Party is sending e-mails to George Soros and back and forth at the highest levels of the Democratic Party, saying, "We're losing the public. Minorities are getting into free market. We want to keep people in their mother’s basements as baristas.’ "Remember even Hillary said that. ‘What are we going to do to keep control of them? Keep them in the dark, keep them desperate. These are quotes. Hundreds and hundred of e-mails. We've covered them, written articles about it, linking to them. They didn't deny that they're real. They're real. They said what do we do? They said we go to culture war.

"These are quotes," Jones said, but when we attempted to verify that Clinton actually uttered the words "What are we going to do to keep control of them? Keep them in the dark, keep them desperate," we found nothing in any public sources, including WikiLeaks.org, to confirm it — and in point of fact, we found no published statements even vaguely resembling those.

We were able to confirm something Hillary Clinton did not say, however, namely: "We want to keep people in their mother's basements as baristas." Ironically, the place we were able to confirm it was Jones' own web site, InfoWars.com, which in October 2016 reposted an article from pro-Putin news site Russia Today alleging that Clinton had described rival Democratic candidate Bernie Sanders' younger supporters as "basement dwellers" and "baristas" — which wasn't really accurate either.

Here's what Clinton really said, transcribed from an audio clip posted on InfoWars (and elsewhere):

Some [Sanders supporters] are new to politics completely. They’re children of the Great Recession. And they are living in their parents' basement. They feel that they got their education and the jobs that are available to them are not at all what they envisioned for themselves. And they don’t see much of a future. I met with a group of young black millennials today and, you know, one of the young women said, “You know, none of us feel that we have the job that we should have gotten out of college. And we don’t believe the job market is going to give us much of a chance." So that is a mindset that is really affecting their politics. And so if you’re feeling like you’re consigned to, you know, being a barista, or you know, some other job that doesn’t pay a lot, and doesn’t have some other ladder of opportunity attached to it, then the idea that maybe, just maybe, you could be part of a political revolution is pretty appealing. So I think we all should be really understanding of that and we should try to do the best we can not to be, you know, a wet blanket on idealism. We want people to be idealistic.....

We've addressed an inquiry to InfoWars for clarification, and await their reply.

Waisman, Al.   "Breaking: Driver Who Plowed into Charlottesville Crowd Identified - Media Tries to Hide Who It Is."    Freedom Daily.   14 August 2017.