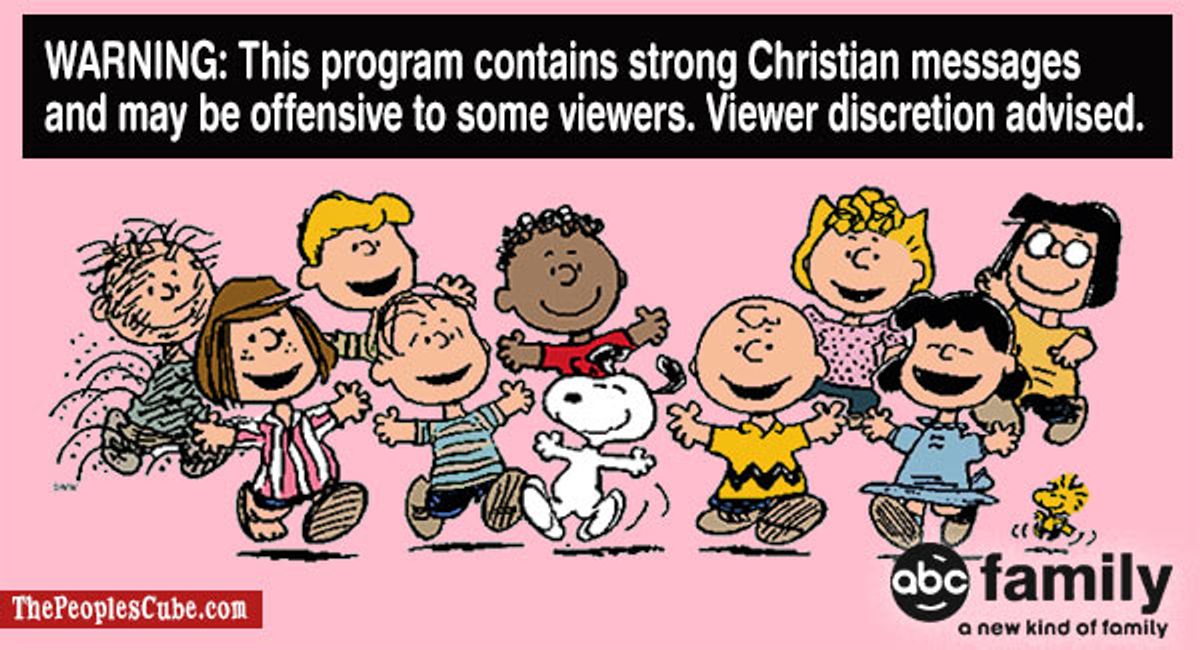 A Charlie Brown Christmas, a recent holiday tradition with strong Christian undertones, celebrated its 50th Anniversary on ABC Family last night ... Before the opening scene and after every commercial break, ABC Family used a disclaimer warning audiences of potentially “offensive and dangerous” religious content found in the dialogue of the program, similar to the disclaimers seen on adult shows that warn viewers of graphic content or strong language. The disclaimer in question for Charlie Brown read: “WARNING: This program contains strong Christian messages and may be offensive to some viewers. Viewer discretion advised.”

The disclaimer was admittedly a compromise solution by ABC Family, who in the past had openly objected to the Christian messages in the program, but was forced nonetheless to air the program uncensored under the pressure from its audiences. Thus, the ‘trigger warning’ was added allegedly out of fear of offending or upsetting those audiences who did not demand to see the show…

Although the article was published on 6 December 2015, it claimed the purported "Christian content" trigger warnings had aired the previous day. That was false, as A Charlie Brown Christmas aired on 30 November 2015. A retrospective and the original animated classic were widely watched, but no one mentioned the undoubtedly notable use of the warnings cited in the claim.

Quite clearly, at the lower left-hand corner of the appended image shared by Revive America, appears the logo of a disreputable fake news site; Revive America either overlooked the attribution or didn't vet its source. In any event, no such warning appeared during the 30 November 2015 airing of A Charlie Brown Christmas (nor at any other point in its broadcast history.)

In 2015, A Charlie Brown Christmas sparked a number of false claims and controversies regarding its Christian content. According to one rumor, President Obama and the Federal Communications Commission (FCC) fined ABC for airing it. Another took umbrage with President Obama's broadcast commentary during the 2015 retrospective.