Video and photographic evidence establishes beyond doubt that Sayoc attended at least two Trump rallies, both during the 2016 campaign and after the president's inauguration. 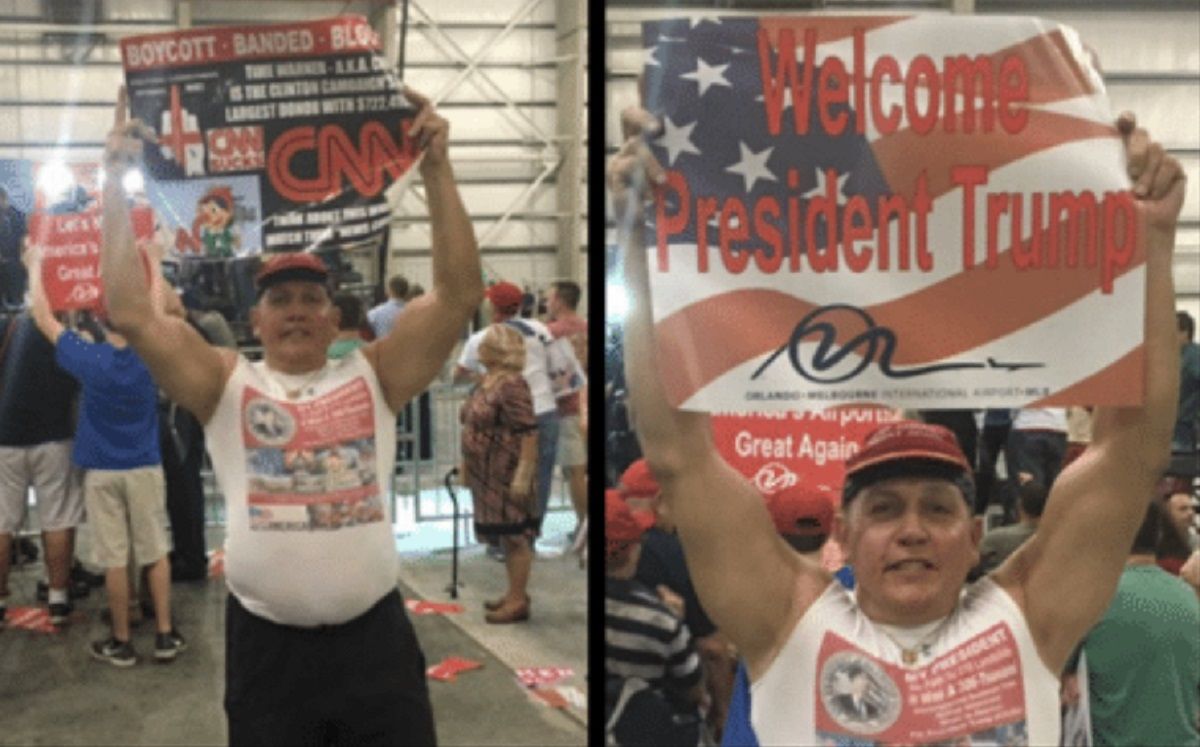 In late October 2018, public attention turned to the background and personal circumstances of Cesar Sayoc, the 56-year-old Florida man arrested in connection with the mailing of a series of explosive devices to high-profile figures in the Democratic party, including former president Barack Obama and former secretary of state Hillary Clinton.

On Facebook and Twitter, Sayoc articulated a fervent support for President Donald Trump, promoted right-wing conspiracy theories, and engaged in vigorous criticism of some of the eventual targets of the mail bomb campaign of which he was accused.

Against this backdrop, social media users and the news media shared photographs and videos that appeared to show Sayoc in attendance at rallies for Donald Trump before and after the latter's election as president, prompting inquiries from readers as to whether the images were authentic.

For example, on 26 October 2018 the anti-Trump Facebook page "Politicked" shared a meme which included photographs of Sayoc apparently holding pro-Trump and anti-CNN signs, along with this description "Accused MAGA bomber Cesar Sayac Jr. was a regular at Trump rallies. He was even considered a 'celebrity' among Trump fanatics. I WONDER WHO RADICALIZED HIM":

There is no doubt that Sayoc attended Trump rallies both during and after the 2016 presidential election campaign, as he posted photographic evidence of such to his own Facebook account. Since his arrest, others have retrieved and published video footage which corroborates his presence at more than one such rally.

An archived version of Sayoc's Facebook profile contains multiple photographs that he himself posted, although it wasn't immediately possible to check exactly where and when the event or events shown took place: Furthermore, the web site Heavy.com compiled many more photographs taken from Sayoc's Facebook and Twitter profiles before they were removed from the social networks in the aftermath of his arrest. These included the photograph shown in the "Politicked" meme.

In the compilation, Sayoc can be seen wearing a t-shirt which acclaims "My President" (a reference to Trump) and "It was a 306 Tsunami" (a reference to the number of electoral college votes the Republican candidate won). Moreover, Sayoc held a "Welcome President Trump" sign which also featured the words "Orlando-Melbourne International Airport."

These details establish that the "Politicked" photograph was snapped after Trump's inauguration and strongly suggest it was taken at a February 2017 rally in Melbourne, Florida:

On 28 October, the filmmaker Michael Moore corroborated Sayoc's attendance at the Melbourne, Florida, rally when he published raw footage from that event which he recorded during filming for what would later become his documentary Fahrenheit 11/9.

Sayoc can be seen at several points in the short video, wearing the same attire as in the "Politicked" meme and holding a separate anti-CNN poster:

Also in the days after Sayoc's arrest, CNN published their own raw footage from the February 2017 Melbourne rally, which again showed Sayoc holding his anti-CNN signs and wearing the same attire:

For their part, CBS News posted a short video clip which Sayoc himself appears to have captured, showing his face while Trump delivers a stump speech in the background:

Trump's words in the video were "You take a look at these people, you study these people." After consulting the Internet Archive's "Trump Archive," we can confirm that then-candidate Trump delivered these lines, in this exact cadence, at a rally in West Palm Beach, Florida, on 13 October 2016.

Trump was responding to multiple allegations of sexual assault and misconduct which were brought by women on 12 and 13 October, as shown in the following video:

This video evidence therefore establishes that, as well as enthusiastically supporting President Trump at a rally in February 2017, Sayoc also attended a separate rally in October 2016 during the campaign itself.