Was Cesar Sayoc a Lifelong Democrat Who “Recently” Covered His Van in Trump Stickers?

The mail bombing suspect had never been a registered Democrat, and his van had been home to pro-Trump material for years. 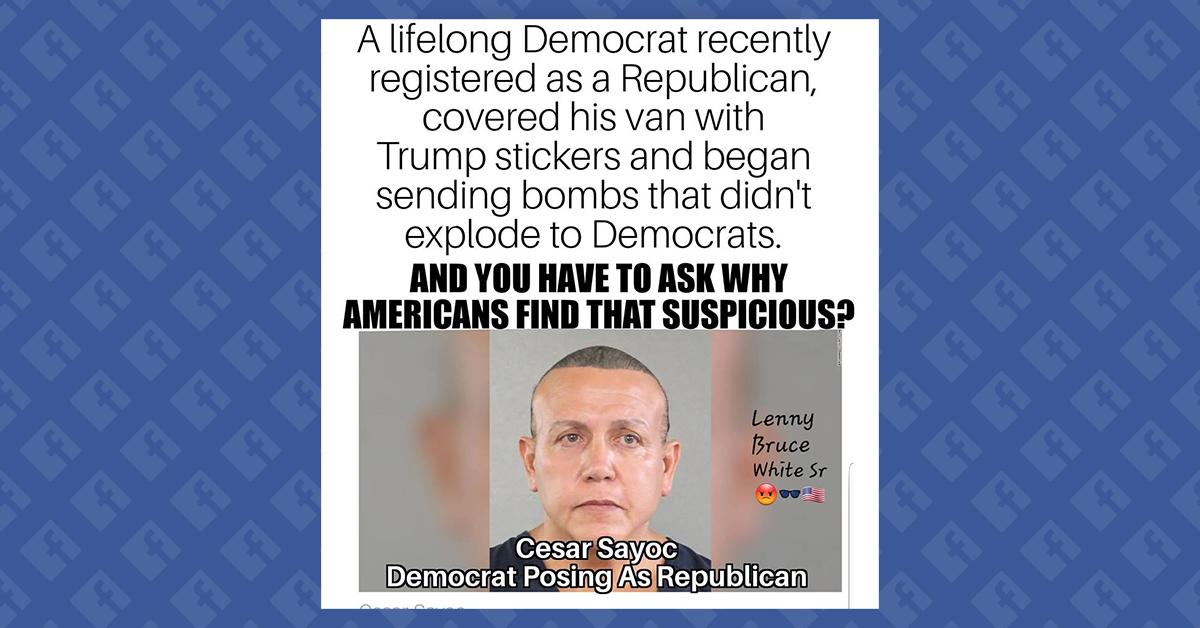 Claim:
Cesar Sayoc was a lifelong Democrat who “recently” plastered his van with pro-Trump stickers before sending bombs to Democrats and media figures.
Rating:

Following the arrest of Cesar Sayoc on charges that he sent mail bombs to prominent Democrats and anti-Trump media figures, the pro-Trump conspiracy contingent attempted to paint the suspect as a Democrat who posed as a Republican — innuendo suggesting that Sayoc’s true goals were to inflict political damage on President Donald Trump and his agenda.

Representative of this claim was a 26 October 2018 Facebook meme that labeled Sayoc as a “Democrat posing as a Republican” and asserted he had “recently” put his infamous pro-Trump stickers on his van, describing those (false) claims as “suspicious”: No evidence documents that Sayoc was a "lifelong Democrat" — all signs point to his being relatively apolitical until 2015, although it appeared he attempted to register as a Republican twice in October 2012. And Sayoc’s van had sported pro-Trump stickers since at least 2017, and it had contained pro-Trump material since at least 2015.

Cesar Sayoc Was Not a “Lifelong Democrat”

Although news reports have stated that Sayoc’s relatives are Democrats, Cesar Sayoc has never been registered as a Democrat. His only known voter registration listed his political affiliation as the Florida Republican Party, and it was filed two weeks before Trump won that state’s GOP primary. Additionally a public records request yielded documents indicating that Sayoc had attempted to register as a Republican twice in October 2012 but failed to complete his application in both cases:

Records from the Miami-Dade County Elections Department show that on two occasions in October 2012 — Oct. 9 and Oct. 26 — Sayoc initiated, but didn’t complete, new voter registration applications. Both times, he checked the box next to "Republican Party" as his party affiliation.

On Oct. 9, 2012, he checked the box that said his was a "new registration," but it appears he left blank the answer to a question about whether he’d ever been "adjudicated mentally incapacitated with respect to voting."

On Oct. 26, 2012, he didn’t check any of the boxes indicating the reason behind his registration application (i.e. new registration, address change, name change, party change, etc.) Near the top of that form, someone scribbled, "INCOMP," indicating it was incomplete.

According to news reports, most people who interacted with Sayoc prior to 2015 stated he did not appear to be overtly political. Ronald Lowy, a lawyer for the Sayoc family who represented Cesar during a 2002 case in which he threatened to bomb an electric company over a bill he disputed, told the New York Times that Sayoc “seemed to have no outspoken partisan views during the 2002 case.”

Daniel Lurvey represented Sayoc against theft charges in 2013 and 2014, and he told the Washington Examiner that he could not recall Sayoc's ever discussing politics. Instead, it appears that Sayoc’s chief interests during this time were bodybuilding and wrestling.

The pattern appeared to have changed by 2015. Sayoc showed up at a Brevard College alumni event for his soccer team that year, where former team members stated that “he quickly made clear he was a fanatical supporter of Mr. Trump, and bombarded them with racist and misogynist conspiracy theories.” Since that time, Sayoc had been an outspoken and fanatical supporter of Donald Trump and an equally outspoken opponent of Democrats online:

On Twitter and Facebook, he railed against former President Barack Obama and Oprah Winfrey with misspelled racial epithets, threatened former Vice President Joseph R. Biden Jr. and praised President Trump and conservative causes. His social-media feeds were an electronic version of the white van carted away by law-enforcement officials on Friday morning, which was covered in stickers praising Mr. Trump, condemning liberals and putting cross hairs over an image of Hillary Clinton.

In 2015, as part of a likely effort to make a false insurance claim, Sayoc reported to police that $45,000 worth of “suits and costumes he needed for his business” were stolen from his van. According to the New York Times, the police report noted “that of the 139 pieces he said were taken, 11 were the president’s clothing brand.”

It is unclear exactly when the outside of Sayoc's van was first festooned with pro-Trump political stickers, but the van had been a common sighting in the South Florida region since at least New Year's Eve of 2017, as reported by the Sun Sentinel:

“I saw this van dozens of times. It always struck me, always unsettled me. It appeared that somebody at times was in the van, though it was hard to tell because of the windows,” said David Cypkin, a documentary film producer who co-produced 2006’s “Cocaine Cowboys" ...

Cypkin encountered the van regularly when he lived near the Shoppes at the Waterways in Aventura, where it was regularly parked. Cypkin believed someone could be living in the van, and finally, on the morning of New Year’s Eve 2017, he snapped a few quick pictures so he could get a better look at some of the stickers later. “I had seen it there at least a year,” Cypkin said.

Assertions that Cesar Sayoc had lifelong Democratic political leanings or that his van was covered in stickers only immediately before his mail-bombing attempts do not hold up to any level of scrutiny.