What’s the Difference Between a Cemetery and a Graveyard?

Regardless of etymology or the history of burial grounds, ultimately, everyone dies. 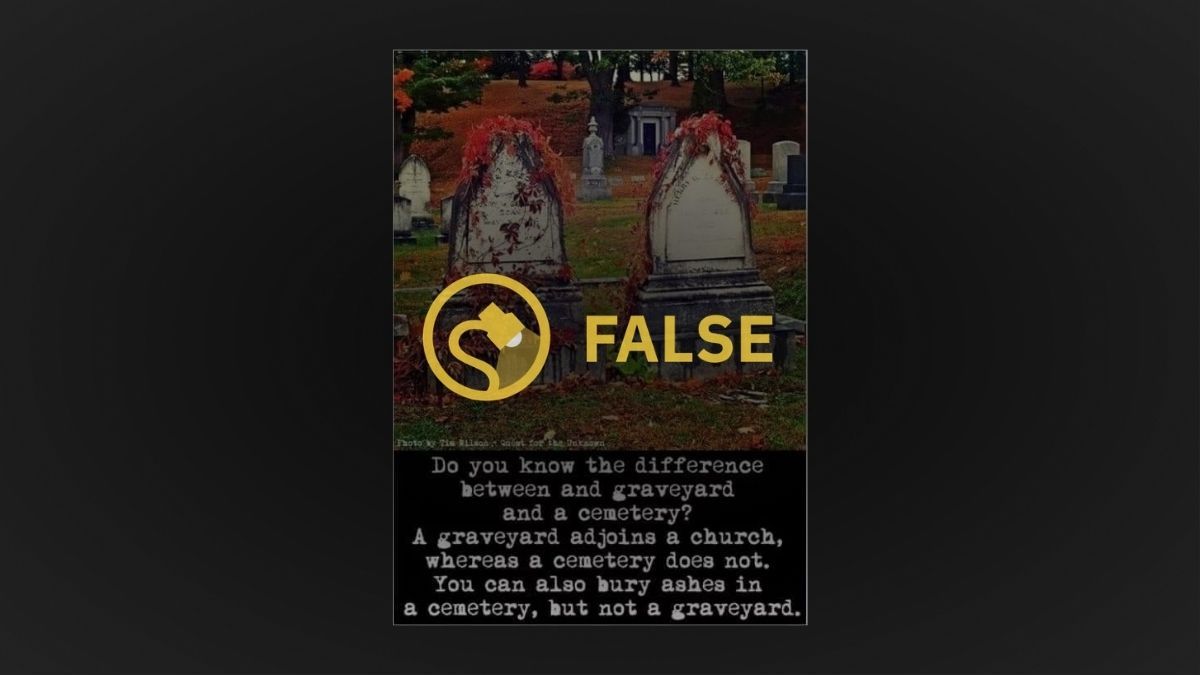 With the arrival of Halloween 2020, we inevitably receive questions about those most hallowed of scary places: the graveyard and cemetery.

A meme that has been making the rounds since 2019 resurfaced with details about burial places that we at Snopes had never heard of previously, so we decided to excavate some history. We dug in to discover interesting tidbits that showed not only are the above claims incorrect, but the alleged differences between the two forms of burial grounds boil down to etymology, history, and religious rules.

What are the Origins of These Words?

We reached out to a number of experts on burial grounds, particularly in western societies like the United States and Europe. Most experts pointed out to us that the distinctions between the two were in the etymology, and concrete differences emerged in the 18th and 19th century. Modern day usage of these terms is essentially synonymous, as seen in Merriam-Webster’s dictionary, which defines a graveyard as a “cemetery,” and a cemetery as a “burial ground.”

We spoke to David Sloane, a leading expert on commemoration, mourning and public spaces. Sloane, a professor in the Department of Urban Planning and Spatial Analysis in the Price School of Public Policy at the University of Southern California, told us “there is little or no difference between a graveyard and a cemetery. Either can be places next to a church (although most of those are called churchyards).”

This is true in present-day usage. But historically, that was not always the case.

Allison Meier, a culture writer who moonlights as a cemetery tour guide, wrote in Lapham's Quarterly that, “Before the 19th century, death in the United States, like life, largely revolved around religion. Those who were part of a congregation were often buried in the churchyard or the crypts underneath the church.”

According to Thomas Laqueur, professor of history at the University of California, Berkeley, and author of “The Work of the Dead: A Cultural History of Mortal Remains,” the word “graveyard” was used generically during the late-18th century. All burial sites from the Middle Ages up until the late 19th century were essentially churchyards, or “the yard of a church,” which also meant they were controlled by church authorities. And early usage of the word “cemetery” corresponded with this practice, making it synonymous with a churchyard. According to “The Work of the Dead”:

[...] the word “cemetery,” when it first appeared in English in 1485, was a synonym for “churchyard” [...] And when, nearly a century earlier in 1387, “cemetery” appeared as a synonym for catacomb, it only just bypassed “churchyard” by taking on its pagan-inflected archaic equivalent, “chirchehawe” [...]
When in 1656 a lexicographer first actually defined “cemetery,” he takes us back to where we started: “a churchyard.” “Churchyard” itself was too easy a word to merit definition; dictionaries in the early days concentrated on hard words. “Cemetery,” by contrast, was a hard word with a long convoluted history. It comes from the Greek koimhthrion and its Latin cognate coemeterium, and originally meant a sleeping place, a dormitory.

The late-18th and 19th century saw regions with established churches begin to resist religious control over burials. As described in “The Work of the Dead”:

The moment in the 18th century when the word “cemetery” is actually thinkable, even speakable, as something other than “churchyard” represents [...] its assignment to a place that was explicitly not a churchyard, not a place of rest for Christians in good standing from a particular parish, but a cosmopolitan space for a cosmopolitan people, a sort of fantasy of ancient Rome’s burial places.

“Cemeteries [were] explicitly a reaction to the churches’ monopoly of the dead,” Laqueur told us, part of a widespread movement to secularize rituals, from marriages to burials. For Laqueur, the distinctions between churchyards and cemeteries ultimately boiled down to who was controlling the burial site. Churchyards were explicitly religious, and controlled by whichever church they belonged to, but cemeteries were not. This difference vanished in modern day times.

In the United States, which was relatively pluralistic according to Laqueur, there was never one official established church, so burial practices varied according to regions or time periods. For many, cemeteries became like public parks.

Mount Auburn Cemetery in Cambridge, Massachusetts, was created in 1831 over 72 acres of verdant lands in response to public health concerns surrounding the unsanitary conditions of burial grounds. The cemetery was so popular, it inspired a wave of rural cemeteries around the country, and the public flocked to them not just to mourn, but to enjoy the landscape, to picnic, and more.

Where Can You Bury Ashes?

Historically, churches had opposed cremation, partly because of the religious belief that the body could ultimately be resurrected. In the late 18th century, men of the Enlightenment and the French Revolution saw practicing cremation in burial rites as “an anti-clerical protest” according to “The Work of the Dead.” In Italy, the pioneers of cremation practices were anti-clerical scientists.

“The Work of the Dead” described the shift within the Church’s approach to cremation:

As corporeal resurrection became less theologically and emotionally exigent, the representational power of putting a dead body in ground from which it would rise again incorruptible diminished; cremation—in a sense the rapid release of a spirit from its fleshly prison—became more plausible.

Now, the most straightforward answer on where one can bury ashes of the deceased, according to experts, is: it depends, but the meme was definitely not accurate. John Troyer, director of the Centre for Death and Society at the University of Bath, told us, “You can bury cremated remains in graveyards. I've watched it happen.”

According to Sloane, “Some graveyards may prohibit the interment of ashes. Some cemeteries may have done so as well, say Catholic cemeteries where for decades [...] cremation was prohibited.”

Laqueur agreed, saying “It depends on who controls the graveyard [...] when it’s not religion, it depends on the community. In other words, if a cemetery is owned outside of a small Southern town, it is perfectly possible that they wouldn’t allow X,Y, and Z, that they would allow somewhere else.”

By 1885, Britain had its first legal cremation in the country’s first legally authorized crematorium. In the 1950s, the Catholic church allowed cremated remains to be buried with religious services as long as the ashes remained together and were not scattered, according to “The Work of the Dead.” Today, Catholic church guidelines urge that cremated remains be preserved in cemeteries or other approved sacred places, and “raises no doctrinal objections to this practice, since cremation of the deceased’s body does not affect his or her soul.”

The Catholic church also stated: "When, for legitimate motives, cremation of the body has been chosen, the ashes of the faithful must be laid to rest in a sacred place, that is, in a cemetery or, in certain cases, in a church or an area, which has been set aside for this purpose, and so dedicated by the competent ecclesial authority." The Catholic church is still, however, opposed to the scattering of ashes.

Today, the difference between graveyards and cemeteries is non-existent. Historical differences existed between churchyards and cemeteries that gradually went away in modern day usage. The interment of ashes is also dependent on the rituals of the community the burial site is tied to. The information in the above meme is misleading and incorrect, which goes to show that some claims should just remain buried.

We thus rate the above meme as "False."