Did CDC 'Quietly Update' COVID-19 Deaths To Say Only 6% Are Legitimate?

A rumor downplaying the seriousness of the deadly virus was promoted by a group of people that included U.S. President Donald Trump 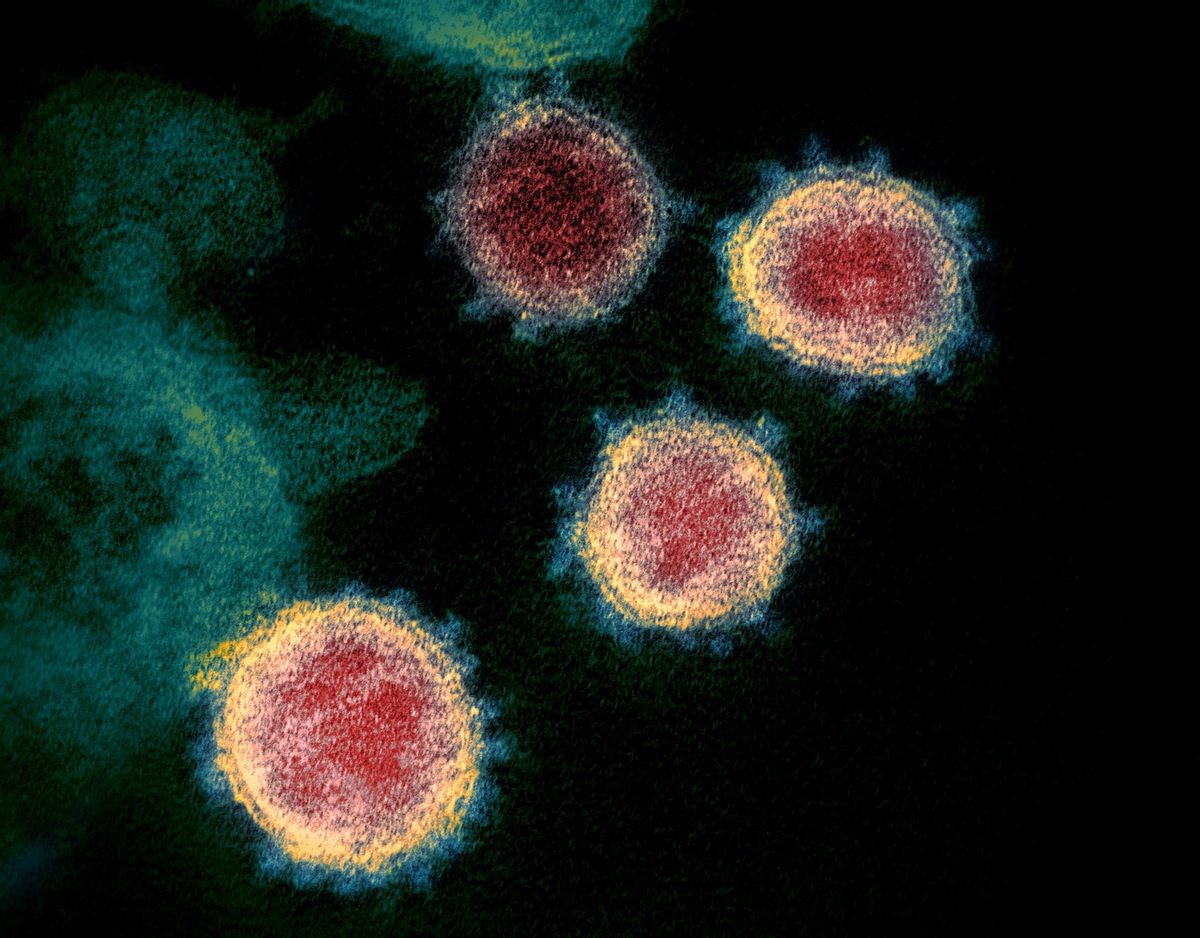 The microscopic view of the virus that causes COVID-19. Photo courtesy of NIAID. (Image Via Wiki Commons)

Claim:
The CDC "quietly updated" its COVID-19 mortality statistics in summer 2020 to show only 6% of previously reported deaths were actually due to the coronavirus, while the remaining 94% died from preexisting health conditions.
Rating:

In attempt to ring the alarm on supposed deceptive practices by the Centers for Disease Control and Prevention (CDC), hard-line conservatives including U.S. President Donald Trump promoted the idea in August 2020 that the public health agency suddenly changed its methods for reporting COVID-19 mortality statistics.

And as a result, viral social media posts alleged, America only tallied about 9,000 COVID-19 fatalities, or roughly 6% of the more than 150,000 deaths widely reported by politicians, scientists, and news reporters.

Many believers, including conspiracy theorist Jeff Berwick, dubbed the alleged change by the CDC evidence that people other than his followers were exaggerating the seriousness of the pandemic, and that everyone should be skeptical of rules on social distancing that halt the economy. In a Sept. 1 video, for example, he said: "It's been proven by the CDC — [the pandemic] is nothing, it was absolutely nothing. Zero. 9,000 people? That's nothing." Numerous readers asked Snopes to investigate the matter. Several inquiries included a link to the hyperpartisan, junk news website The Gateway Pundit, or a link to another conspiratorial web page that phrased the alleged revelation like this:

"The CDC quietly released new covid numbers showing those who solely died from the virus was only 6% (9,210) of the total deaths (153,504). 94% of those who died, did so because they had existing health conditions."

Additionally, The Gateway Pundit page claimed, "the overwhelming majority" of reported COVID-19 deaths were among "very old Americans" — without going into specifics on what age population that meant — and suggested nefarious intentions on the part of the CDC to try to change its guidance without anyone noticing.

Versions of this notion circulated widely online in summer 2020, in part because of support from American politicians such as Trump. In two retweets — one by his campaign adviser that linked to the Gateway Pundit page and another by a supporter of the unfounded QAnon conspiracy theory (screenshot below) — Trump endorsed the claim, essentially denigrating scientific evidence by his own health advisers, Dr. Anthony Fauci and Dr. Deborah Birx. However, as of this writing, Twitter had removed the below-displayed post for violating its terms of service. First, to unpack the claim, let's be clear about how COVID-19 — which is the disease caused by the coronavirus dubbed SARS-CoV-2 — attacks the body and can become deadly. According to an article in the journal Science, a highly credible scientific publication:

Once inside, the virus hijacks the cell’s machinery, making myriad copies of itself and invading new cells.

As the virus multiplies, an infected person may shed copious amounts of it, especially during the first week or so. Symptoms may be absent at this point. Or the virus’ new victim may develop a fever, dry cough, sore throat, loss of smell and taste, or head and body aches.

If the immune system doesn’t beat back SARS-CoV-2 during this initial phase, the virus then marches down the windpipe to attack the lungs, where it can turn deadly.

In other words, SARS-CoV-2 attacks lung cells, and that assault on a person's respiratory system can greatly exacerbate other preexisting conditions. That means COVID-19 patients run the risk of previously manageable health problems turning fatal — including cardiac arrest, liver failure, or lung scarring — after they're infected with SARS-CoV-2. Put another way, Ryan McNamara, a virologist at the University of North Carolina at Chapel Hill, in a series of tweets compared the SARS-CoV-2 virus with the human immunodeficiency virus, or HIV, which causes AIDS. He wrote:

After years of (HIV) virus spread, and in the absence of treatment, a patient infected with HIV will develop AIDS. [...] During this state of HIV progression, white blood cells called T-cells are depleted. This can allow co-infecting pathogens to spread unchecked or tumor cells to grow & metastasize. Hence pneumonia & AIDS-associated cancers are leading causes of death in HIV+ patients.

Next, we investigated how the CDC compiles COVID-19 death toll data. Since the viral posts did not specify what "numbers" by the CDC to which they were alleging nefariousness, we considered the CDC's Provisional Death Counts for Coronavirus Disease (COVID-19) web page, which is a compilation of death certificates updated weekly by the National Center for Health Statistics (NCHS).

Additionally, we obtained an April 2020 document by the World Health Organization titled, "International Guidelines For Certification and Classification (Coding) of COVID-19 As Cause of Death," which stated that medical examiners must include as much detail as possible based on records and lab testing when they're filling out death certificates. For example, a death certification for a patient who was infected with SARS-CoV-2 and afterwards developed pneumonia and fatal respiratory distress would list all three conditions as causes of death (see example below). The document also said death certificates for people who suffered from chronic conditions, such as coronary artery disease or diabetes, before their exposure to the coronavirus would list those conditions in addition to COVID-19. The coronavirus would still be labeled the underlying cause of death — or the disease that “initiated the train of events leading directly to death," per the WHO's definition — since the preexisting health issues were likely exacerbated by the initial SARS-CoV-2 infection.

Next, we considered the CDC's process for analyzing those death certificates that list COVID-19. Its website explained:

When a person dies, the cause of death is determined by the certifier — the physician, medical examiner, or coroner who reports it on the death certificate. States register all death certificates and send them to [NCHS], where they are used to produce the nation’s official death statistics. [...]

Complete means describing a clear chain of events from the immediate to the underlying cause of death, reporting any other conditions that contributed to death, and providing information that is specific.

In short, the CDC compiles mortality statistics that are based on all possible causes of death for one individual. So if a diabetes patient with high blood pressure was infected with COVID-19 — which can target blood vessels — and they die because their blood vessels were already so damaged, the CDC would consider their death related to both the coronavirus and diabetes. (According to the CDC database of death certificate data, that was the case for more than 27,500 people.)

As of this writing, the CDC last updated its mortality statistics on Sept. 3, 2020. At that point, the agency said 171,787 death certificates included COVID-19 since the beginning of the U.S. outbreak in February 2020. And alongside the coronavirus, the majority of documents also listed comorbidities, or additional health issues that can either worsen or develop after the initial SARS-CoV-2 infection. For instance, 71,700 included influenza or pneumonia and COVID-19 as potential causes of death.

However, fueling the conspiracy theory, the CDC web page stated:

That meant, yes, medical investigators believed only 6% of COVID-19 patients died from the coronavirus alone. Those patients had no reported comorbidities. However, it was dangerously wrong to misinterpret that fact to mean that the remaining fatalities (or 94 percent) died from health issues other than the coronavirus. Rather, most people's underlying cause of death was COVID-19 and the virus either intensified or caused other illnesses that contributed to patients' death.

Note: The "6%" claim was not the first attempt by COVID-19 conspiracy theorists to allege without any substantial evidence that the CDC was nefariously compiling data to trick people into thinking the coronavirus was more serious than it actually is. In spring 2020, for instance, they attempted to ring the alarm on the agency supposedly inflating COVID-19 death numbers for political reasons, but in reality the alleged discrepancy was a result of comparing two separate data sources that report different measurements. (See our analysis into that claim here.)

The death certification statistics, in short, prove that people with preexisting health problems — such as asthma or hypertension — face higher risk for serious illness, or dying, if they're infected with COVID-19, according to Bob Anderson, lead mortality statistician at NCHS. He said in a statement to NBC News: "These data are consistent with CDC guidance that those with underlying medical conditions are at greater risk for severe illness and death from COVID-19."

Additionally, Fauci explained the phenomena in a Sept. 1 interview on the ABC program "Good Morning America:

The point that the CDC was trying to make was that a certain percentage of [COVID-19 deaths] had nothing else but just COVID. That does not mean that someone who has hypertension or diabetes who dies of COVID didn't die of COVID-19 — they did. So the numbers that you've been hearing — the 180,000-plus deaths — are real deaths from COVID-19. ...It's not 9,000 deaths from COVID-19.

Next, we found data to address another aspect of the fringe theory: that the "overwhelming majority" of reported COVID-19 deaths were among people of a "very advanced age." For the purpose of this report, we considered that group to be people aged 85 or older. And according to the CDC death certificate data, 53,000 documents for that population listed COVID-19 as a potential cause of death, accounting for about one-third of the total, or less than the majority.

We should note here: Epidemiologists and health officials have been up front with the fact that COVID-19 patients who are older — as well as those who have underlying health problems — are at greater risk for serious problems.

"As you get older, your risk of being hospitalized for COVID-19 increases. Everyone, especially older adults and others at increased risk of severe illness, should take steps to protect themselves from getting COVID-19," according to the CDC. Eight out of 10 people who have died as a result of COVID-19 in the U.S. were over the age of 65, per the agency's data.

Lastly, we looked for any evidence to confirm or deny that the CDC attempted to "quietly" adjust its mortality statistics under the public's radar. Bob Anderson, lead mortality statistician at NCHS, told NBC News in a statement the death certificate data does “not represent new information as NCHS has been publishing this same information since the outset when we began posting data on COVID-19 deaths on our web site.”

In sum, considering the way in which the coronavirus impacts the human body, the way the CDC compiles data from death certificates — listing comorbidities that were either developed or exacerbated by COVID-19  — as well as the fact that one-third of COVID-19 fatalities were people aged 85 or older, we rate this claim "False."