Are Cats with Purple Paws Used as Dogfighting Bait?

Dogfighting remains a disturbing and prevalent practice. But does it have any connection to cats with dyed fur? 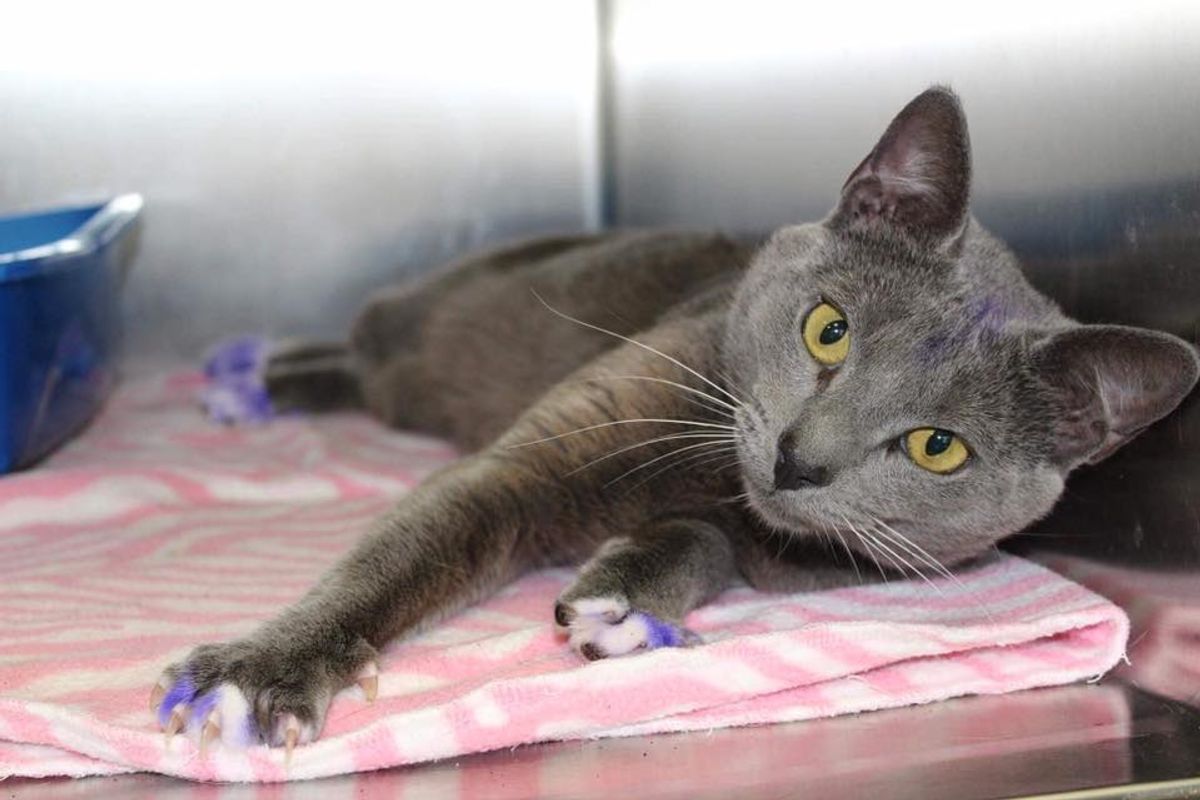 Claim:
Purple paws indicate that a cat is being used as bait by dogfighters.
Rating:

Since 2017, many social media users have encountered articles alerting them that, "If you see a cat with purple paws, pick it up and take it to the nearest shelter because it’s being used as bait by dogfighters."

These warnings are traceable to a Facebook post made by the Naples (Florida) Cat Alliance on May 15, 2017, in which they described their experience in receiving a cat with purple-dyed paws (dubbed "Mr. Purple Paws") from local animal control. The post asserted that the cat exemplified how "Dog fighters use markers to color the white parts of cats and kittens so they can bet on which color will die first. They are 'color-coded' and then thrown to packs of dogs, while these sick barbarians place their bets": We asked Naples Cat Alliance for more information about "Mr. Purple Paws," and they allowed they didn't have any direct knowledge he had escaped or been rescued from dogfighters, but they surmised as much from a variety of factors (emphasis ours):

The story is true although we definitely made assumptions about why his paws were colored. We based it on the fact that he came from an area that is well known for dog fighting. We couldn't get the dye off, so it wasn't hair color or any water soluble marker. The timing of his arrival coincided with information we had been receiving from local law enforcement about dog fighting and coloring or numbering the bait animals. Can we definitively say he was a victim of dog fighting, no. We based it on info and location. It would also make sense because he is a friendly cat and would readily approach a "friendly" stranger, so he would be easy to catch.

As is often the case in evaluating these types of warnings, tracing a line between one particular instance of something and a broader general trend is problematic.

Do organized rings of dogfighting exist in the United States? Unfortunately, yes, and they are both cruel and horrific.

Do those involved in dogfighting use cats and other animals as "bait" to train their dogs or provide entertainment for spectators? News reports suggest that some of them have done so, but animal welfare organizations have also investigated such claims and found them to be lacking in evidence:

The RSPCA has said claims of kittens being sold as live bait for fight dogs on Facebook are “not true”.

Reports that kittens were being advertised on Facebook as “bait” for dog fighters included two posts purportedly selling the animals in Liverpool.

But RSPCA told the Independent their investigation found the reports to be false.

In a statement, the anti-animal cruelty organisation said: "An RSPCA inspector has looked into reports of kittens being offered for sale on social media as ‘live bait’ and we are satisfied this is not the case.

"We treat all calls about animal cruelty seriously and have checked the welfare of a number of cats and kittens in relation to these claims."

The organisation also added that its special operations unit, which investigates organised animal crime, including dog fights, has never found "strong evidence" to support claims of dog fighters setting their dogs on smaller animals before dumping them.

Do dogfighters throw multiple cats to packs of dogs so spectators can wager which feline will die first? Do they color the paws or fur of these animals to help bettors distinguish them from each other? If so, how widespread are such practices? Those are all questions that cannot be answered with responses any more definitive than "possibly," "sometimes," "maybe," and the like.

News articles occasionally report the finding of dyed cats and link those discoveries to dogfighting, but those reports invariably include disclaimers noting that suggestions of dogfighting connections are a matter of conjecture rather than evidence, such as: "[BWCR spokeswoman Katie Jane] Lloyd admitted she had 'absolutely no evidence' about the dog-baiting theory" and "Mahoning County Deputy Dog Warden Dave Nelson said these cats could have been involved in dogfighting."

We've contacted several animal welfare and law enforcement agencies about this subject and haven't yet found anyone with direct knowledge or evidence of such practices. The ASPCA, for example, told us that, although dogfighting remains a "prevalent and barbaric practice" in the U.S., they have "not encountered this practice [of using cats as bait] in our ongoing efforts to combat dogfighting across the country."

Moreover, a number of commenters have offered possible alternative explanations for the purple paws, such as the feline's having come into inadvertent contact with Cydectin (a pour-on treatment for infections and parasites in livestock which is typically dyed purple to help farmers distinguish between treated and untreated animals).

The best advice we can offer is that if you should encounter an animal that appears to be neglected or mistreated — if it looks to be suffering from an untreated illness or injury; if it seems to be malnourished or dehydrated; if it is confined outdoors with inadequate protection from the elements and temperature extremes or without ready access to water; if its fur is unkempt or matted (or, perhaps, unusually colored) — contact a local animal control or welfare agency and let them investigate.

We do note that if dogfighters really were applying coloring to cats' paws to help wagerers distinguish those animals from each other during events in which the cats were mixed together, those dogfighters would have to be using a variety of different colors of dyes and not just purple. However, the overwhelming preponderance of warnings and articles on this topic exhort readers to specifically keep watch for cats with purple paws, because all those articles are based on a single Facebook post that reported finding a cat with such a coloring. Logically, readers would need to be alert to cats that appeared to have had any hue of artificial coloring applied to them.

On a positive note, we can report that the Naples Cat Alliance told us the original Mr. Purple Paws was adopted out to a new home and now lives outside of Pittsburgh.