Did a Catholic Priest Put an Aborted Fetus on an Altar to Promote Republican Candidates?

Fr. Frank Pavone said he placed a fetus on the altar ahead of the 2016 presidential election to urge parishioners to cast ballots against Democrats. 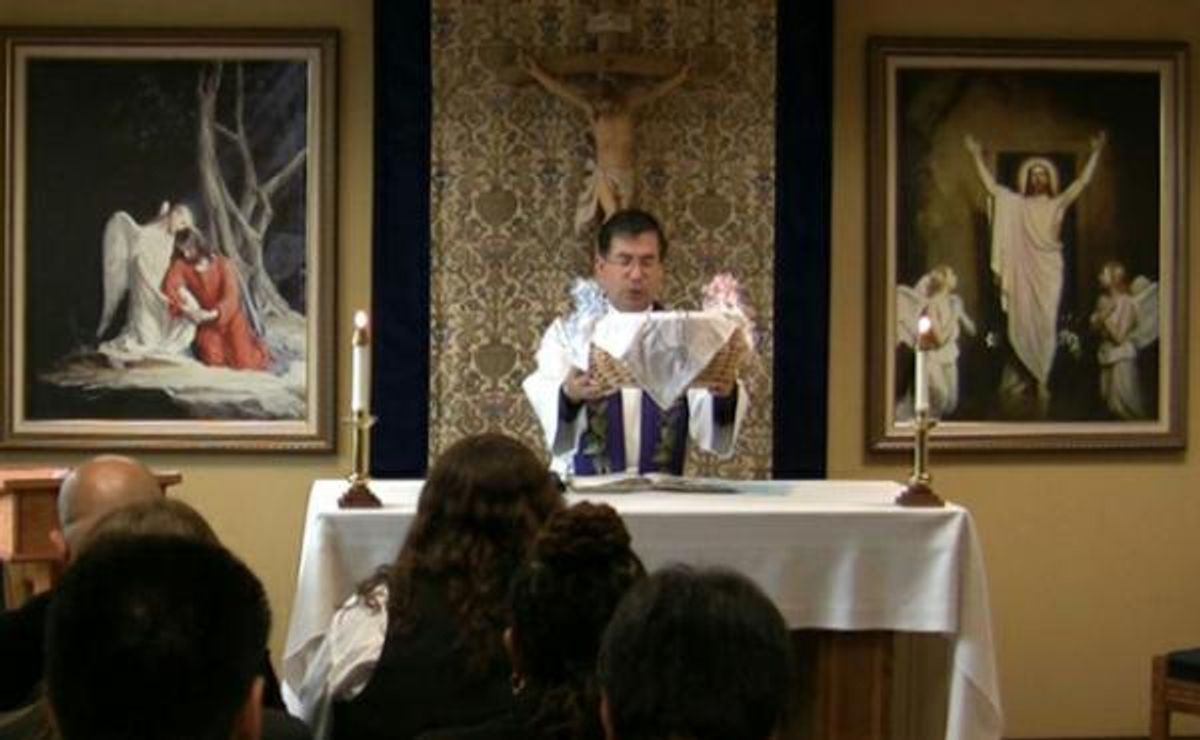 Claim:
A Catholic priest placed an aborted fetus on the altar to urge parishioners to vote for Trump.
Rating:

On 6 November 2016, a Catholic priest posted a live Facebook video in which he placed (what was said to be) an aborted fetus upon an altar, urging fellow Catholics to vote against Democrats and legal abortion.

A spokeswoman for the Catholic clergy activist group, Priests for Life, confirmed that the fetus was real and was given to the organization by a pathologist under a strict agreement on confidentiality, although she was able to tell us that it was aborted in the second trimester of pregnancy. The group has dubbed the fetus "Baby Choice."

In the video, Fr. Pavone has the fetus on an altar, which the spokeswoman said is located in a room that is sometimes used for Mass at the organization's headquarters in Staten Island, New York. The Priests for Life group originally performed a funeral service for the body, which is preserved in formalin and normally kept in a memorial chapel. On the Sunday before the contentious 8 November 2016 presidential election, Fr. Pavone put it on wider display and urged the religious to vote against legal abortion by ousting Democratic lawmakers:

Election Novena 7 — Today I am showing you a child who was killed by abortion and entrusted to us by a pathologist for burial. We have had a funeral for this baby... who rests in a Memorial Chapel — but today I am showing him to you because in this election we have to decide if we will allow this child killing to continue in America or not. Hillary Clinton and the Democratic platform says yes, let the child-killing continue (and you pay for it); Donald Trump and the Republican platform says no, the child should be protected.

Fr. Pavone is no stranger to controversy. In 2014, New York Cardinal Timothy Dolan cut ties with Priests for Life, saying the group was stonewalling on financial reforms. On 7 November 2016, Ed Mechmann, director of public policy for the Archdiocese of New York, slammed Fr. Pavone and called the video desecration:

It is hard for me to express in calm, measured terms, the revulsion I feel about this. I know that the pro-life movement has long had a debate about the use of graphic images to reveal the reality of abortion. The discussion has always focused on a cost/benefit analysis of their effect of the viewer versus the risk of alienating those who don't want to see such things, especially on women who are post-abortive and have not yet healed.

But that's all beside the point. The real question is, what about that baby as a human being? That baby is an individual human person, someone’s son or daughter, made in the image and likeness of God, unique and unrepeatable, and deserving of our love and mercy. To use her body in this way is to treat that poor lost girl or boy as an object to be used — which is the antithesis of love — and not as a brother or sister to be mourned.

The full video can be viewed below (graphic image warning):