Did a 2005 Movie Feature Hurricanes Named Harvey and Irma?

An online conspiracy theory about government-created hurricanes gets even the most basic facts wrong. 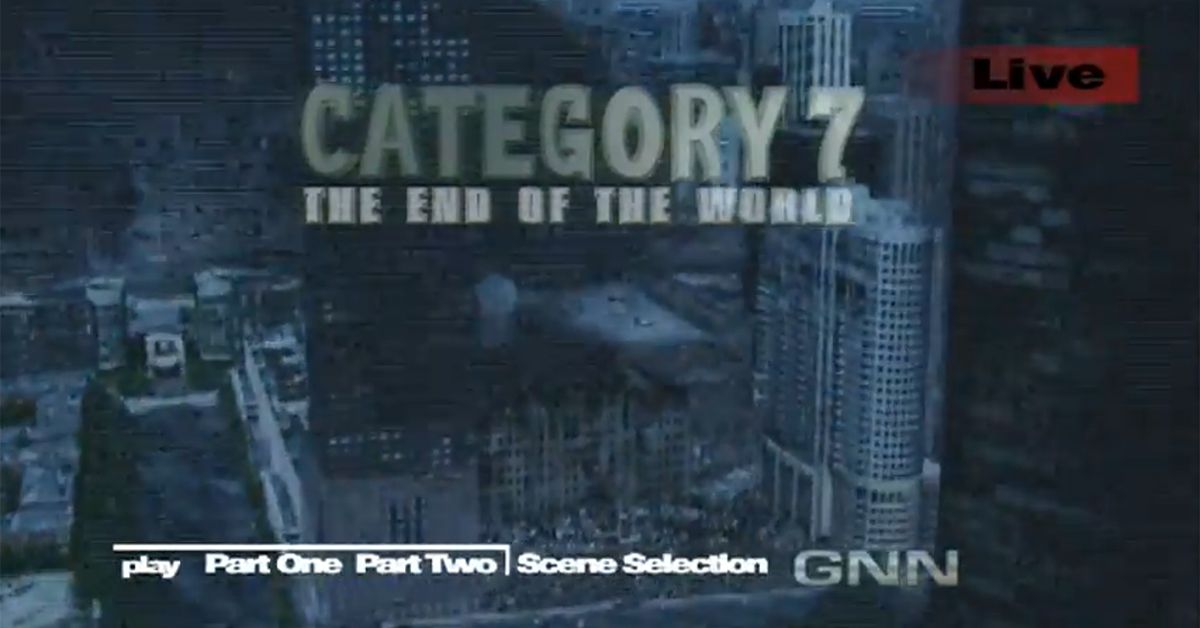 Claim:
The 2005 movie Category 7: The End of the World predicted the arrival of hurricanes named Harvey and Irma.
Rating:

In September 2017, rumors emerged on social media that a 2005 movie predicted current events by featuring two hurricanes named Harvey and Irma -- and that this somehow proved that the hurricanes were both human-engineered.

11 years and 9 months ago a movie came out called "Category 7 End of the World" and there were only two episodes called "Harvey" and "Irma"! Read that over a few times until it sinks in! These are NOT "storms", but predictive program attacks on the American people that they told "U.S." about in the Hollywood black magic ritual of telling their victims exactly how you intend to take their lives.

The second hurricane called IRMA in the movie struck the United States on 9/11, and guess when this storm is suppose to hit "U.S."? This is way too much of a "coincidence" for even the casual observer to ignore.

Category 7: End of the World was a two-part made-for-TV movie broadcast by CBS in November 2005. It's an apocalyptic thriller directed by Dick Lowry and starring Shannon Doherty about a series of extreme weather events that cause destruction around the world.

None of the storms or hurricanes in the movie was named Harvey or Irma. Furthermore, Category 7: End of the World was broadcast in November 2005, which was 11 years and 10 months (not nine months) before Hurricane Irma's expected landfall in Florida on 10 September 2017. So the meme's two key claims were false.

However, even if these claims were accurate, they would have no sinister meaning.

Atlantic hurricanes are named from a prescribed list of names that are rotated every six years and published in advance. So we already know the list of potential hurricane names for 2018, 2019, and every year for the foreseeable future, unless they are changed by the World Meteorological Association.

There was a Hurricane Harvey, for example, in 2011 and a Tropical Storm Harvey in 2005 and 1999. Had the filmmakers named their fictional storms Harvey or Irma, they could easily have chosen them from the same publicly available list.

Even if there had been 11 years and 9 months between the original broadcast of Category 7: End of the World, and Hurricane Irma's expected landfall, this would be a meaningless coincidence.

To believe otherwise requires believing a vast, unfeasibly complicated conspiracy theory involving the movie's writers, directors, CBS, and the federal government, who would then have to engineer and manage a tropical storm into a powerful hurricane (something that is impossible) and time its development to perfection so that it makes landfall in the United States on 11 September 2017 exactly.

In reality, Hurricane Irma is expected to hit the continental U.S. on 10 September 2017.

However, again, even if the post had gotten the dates right, the idea that they contain significance is an example of cherry-picking numerical patterns (which exist everywhere) and contorting them to fit pre-existing beliefs and theories. We have addressed such pattern-seeking previously, in the context of both hurricanes and terrorist attacks.

The "Category 7" meme consists of a ludicrous conspiracy theory based on evidence-free claims about government "geoengineering" and numerology, and ignores the fact that hurricane names are made public years in advance. Furthermore, its two key factual claims - that the hurricanes in the movie were named Harvey and Irma, and that the movie was released 11 years and nine months ago - are false.