Did Ben Carson Discover $500 Billion in Accounting Errors at HUD?

An audit of Housing and Urban Development's books was carried out by the Office of the Inspector General and found an aggregate of billions in accounting errors. 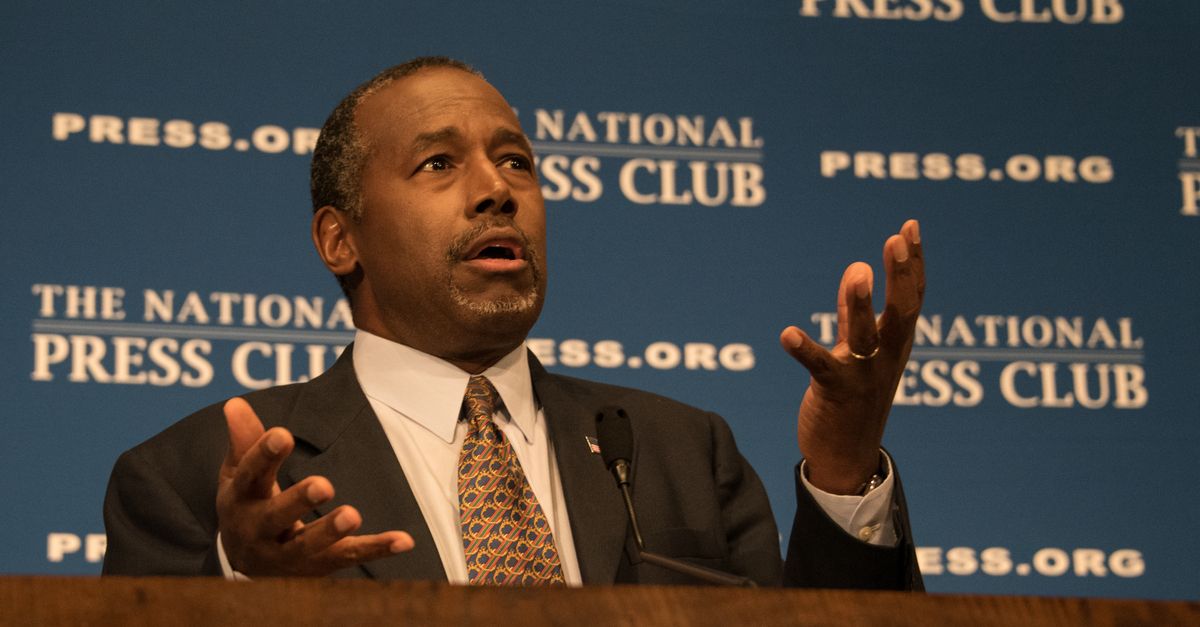 Accounting errors found by HUD's Office of the Inspector General in 2015 and 2016 financial statements totaled more than $500 billion.

The audit was initiated before Ben Carson assumed his position at HUD, and it reckons an aggregate figure of accounting errors and not an actual recovery of $500 billion in funds.

On 6 April 2017, the Daily Wire posted a story reporting that retired neurosurgeon and current U.S. Department of Housing and Urban Development (HUD) director Ben Carson found $520 billion in accounting errors after "ordering" an audit of the agency:

Ben Carson was the first neurosurgeon to successfully separate conjoined twins, so, he's kind of a super hero.

But apparently, he's also not a bad accountant.

President Trump picked Carson to head the Department of Housing and Urban Development, whose budget grew by leaps and bounds under Barack Obama.

In one of his first acts as HUD Secretary, Carson ordered an audit of the agency. What he found was staggering: $520 billion in bookkeeping errors.

The referenced audit was actually initiated by HUD's Office of the Inspector General (OIG), who originally issued an independent auditor’s report on 15 November 2016 (over two months before Dr. Carson was confirmed as the new HUD secretary), along with a disclaimer noting that many discrepancies and information gaps existed within HUD's financial statements and notes. That report was subsequently replaced with a "reissued" version dated 1 March 2017.

The OIG is the enforcement arm of HUD and has been led by Inspector General David Montoya since 2011. Their revised audit report issued on 1 March 2017 deals with "pervasive material errors" found in HUD's 2015 and 2016 consolidated financial statements:

The total amounts of errors corrected in HUD’s notes and consolidated financial statements were $516.4 billion and $3.4 billion, respectively. There were several other unresolved audit matters, which restricted our ability to obtain sufficient, appropriate evidence to express an opinion. These unresolved audit matters relate to (1) the Office of General Counsel’s refusal to sign the management representation letter, (2) HUD’s improper use of cumulative and first-in, first-out budgetary accounting methods of disbursing community planning and development program funds, (3) the $4.2 billion in nonpooled loan assets from Ginnie Mae’s stand-alone financial statements that we could not audit due to inadequate support, (4) the improper accounting for certain HUD assets and liabilities, and (5) material differences between HUD’s subledger and general ledger accounts. This audit report contains 11 material weaknesses, 7 significant deficiencies, and 5 instances of noncompliance with applicable laws and regulations.

The process of auditing HUD and identifying errors in their financial reports began in 2016, according to the report:

On November 15, 2016, we issued an independent auditor’s report stating that the U.S. Department of Housing and Urban Development (HUD) was unable to provide final fiscal years 2016 and 2015 consolidated financial statements and accompanying notes in a timeframe that would allow us to obtain sufficient, appropriate evidence to determine whether they were free from material misstatement. We also reported on the delays encountered in the material weakness, Weak Internal Controls Over Financial Reporting Led to Errors and Delays in the Preparation of Financial Statements and Notes.

The delays were due to insufficiently designed and implemented financial reporting processes and internal controls that were put into place because of HUD’s transition of its core financial system to a Federal shared service provider (FSSP). HUD inadequately planned and tested the changes to HUD’s financial reporting process before the transition. Additionally, late restatements performed by HUD’s component entities, the Government National Mortgage Association (Ginnie Mae) and Federal Housing Administration (FHA), contributed to the delay in providing final consolidated financial statements. As a result, we were unable to provide an opinion on HUD’s fiscal years 2016 and 2015 financial statements. While there were other material matters that supported our basis for disclaimer, this was the primary reason for our disclaimer of opinion. HUD published its consolidated financial statements and our disclaimer of opinion in HUD’s 2016 agency financial report (AFR).

The total dollar figure noted in the report — roughly $520 billion — is undeniably a very large amount of money (equivalent to approximately 13% of the entire 2015 federal budget). But the OIG report explains that figure was the absolute value of all numeric corrections made to HUD financial records, meaning all numeric adjustments (whether positive or negative) were added to create that aggregate figure.

A simple analogy would be to consider a bookkeeper who mistakenly entered the same $1,000 payment into a ledger six times: the aggregate value of those mistakes would be $5,000, but that would not mean the hapless bookkeeper actually "found" and/or "lost" $5,000 in real funds, or that that amount of money ever actually passed through his hands. Likewise, the OIG report on HUD does not mean that $520 billion was lost and then recovered as of 1 March 2017:

Through its correction process, HUD identified additional note errors and found an error in its presentation of FHA’s fiscal year 2015 restatement. FHA’s restatement included a $1.4 billion adjustment to its cumulative results of operations beginning balance on the statement of changes in net position. HUD made this adjustment to its consolidated statement of changes in net position but presented the change in the beginning balance, not as a correction of error, as reported correctly by FHA. In total, the absolute values of corrections to HUD’s notes and principle financial statements were approximately $516.4 billion and $3.4 billion, respectively.

Although significant problems with HUD's bookkeeping turned up, claims that Dr. Carson, barely two months into his tenure as HUD secretary, found billions of dollars lost through accounting errors are misleading. The audit originated prior to Dr. Carson's arrival at HUD, and the astoundingly large-sounding dollar figure is an aggregate of many different discrepancies in different directions.

According to the OIG report, HUD maintains that the errors represented a net adjustment of only $3 million and resulted in "no changes in HUD’s financial position or impact to [HUD] programs”:

We reached out to the Department of Housing and Urban Development's Office of the Inspector General but they declined to comment, saying only, "We believe the audit speaks for itself."

Montoya, David A.   “HUD Oversight and Management Issues”     Testimony before the U.S. House of Representatives Committee on Appropriations Subcommittee on Transportation, Housing and Urban Development, and Related Agencies.