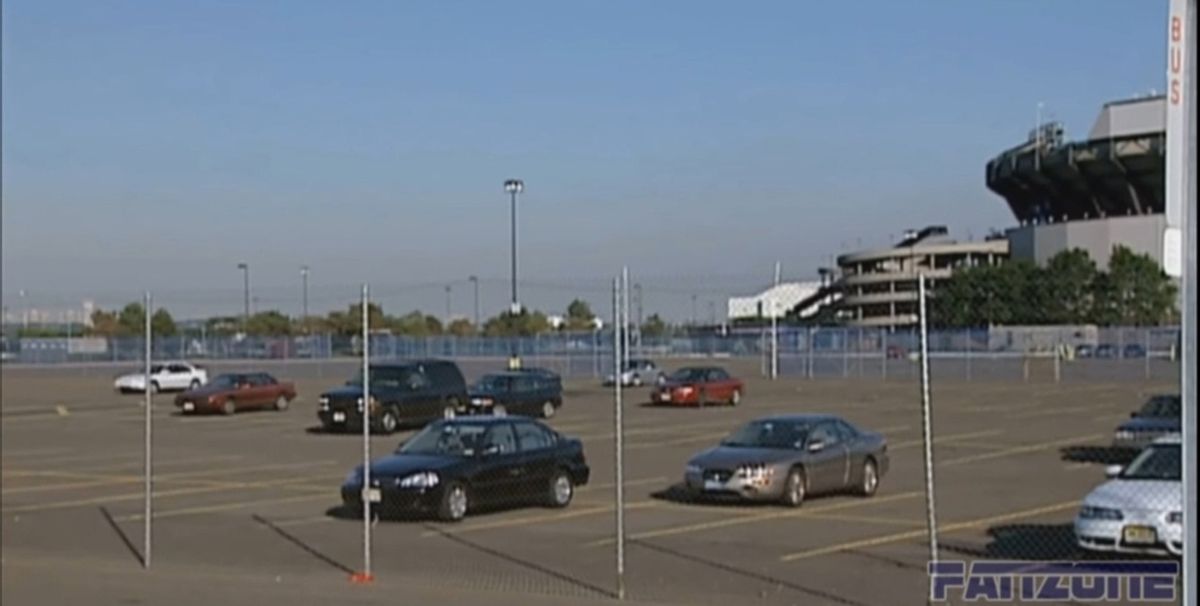 This picture was captioned as cars that never left the Giants Stadium commuter lot after 9/11. (Image Via Reddit)

Claim:
An old picture shows cars in a commuter lot at Giants Stadium that were owned by victims of the 9/11 terrorist attacks.
Rating:

On Sept. 3, 2021, Reddit user u/OKWall1298 posted a picture to the r/interestingasfuck subreddit that was captioned as: "Cars that never left the Giants Stadium commuter lot after 9/11."

The photograph also later appeared on Nov. 29 in a video on the @theoryarea TikTok channel. It was captioned "#conspiracytiktok" and received nearly 5 million views in three days.

In our initial research, we looked into the "Fanzone" watermark that appeared on the picture, which we thought might have referred to an old NFL or New York Giants message board. It's also possible that it was about the New York Giants Fan Zone, which showed "fan zone" as two words. A search of newspaper archives on newspapers.com did not return any helpful results for "Giants" and "fanzone" or "fan zone."

We reached out to u/OKWall1298, the Reddit user who posted the photograph on Sept. 3. According to a Google reverse image search, this was the earliest date it was uploaded online.

There was little reason to doubt the authenticity of the caption of the photograph. It looked like it was from around 2001. The number of cars perhaps made sense. Also, why else would someone point a camera at a fairly empty parking lot, with the focus on the cars and not the stadium? This information all seemed to line up.

Hours after this story was first published, u/OKWall1298 responded and told us that they originally pulled it from a YouTube video. We found that the picture was not a photograph, but rather a screenshot from a film. The same cars are visible at the 18:29 mark in the documentary, "Remembering 9/11: How the Events of September 11th Impacted the NFL and the Community."

Former Giants running back Tiki Barber said in the video: "Giants Stadium parking lot was a commuter lot. There were cars there that never left. When you talk about feeling someone who's just been through a tragedy, that's what it felt like for us, because we would drive out, and there would be cars there. The same cars sitting in the same spot. You know that that person passed away. And it made it real. And it made it not just an event that happened to this country, but an event that happened to us."

According to the Staten Island Advance, New York Giants owner John Mara remembered the cars that remained in the commuter lot at the old Giants Stadium for weeks following the the terrorist attacks on Sept. 11, 2001. At the time, he was the team's vice president.

The cars haunted John Mara for days that built into weeks.

They were the cars that never left the parking lot at old Giants Stadium. For so many days after the towers crumbled, the Giants' current president and CEO, then the team's vice president, drove through the front section commuters used as a Park-and-Ride to downtown Manhattan, knowing full well that those cars weren't left there for convenience.

Many belonged to the deceased of 9/11.

"To drive past that every day, to see those cars and know those people had perished, that was just a gut-wrenching scene," Mara said as he looked toward Sunday, when the solemnity of a 10th anniversary of 9/11 remembrance will be juxtaposed against the excitement of the Giants' regular-season opener in Washington. "I just remember seeing those cars there every day, especially those days immediately after because people weren't going into work those first few days. It was obvious to me that those had to belong to people working down there."

The old stadium was closed in 2010. The newly-built MetLife Stadium replaced it.

Barber also again recalled seeing the cars in the commuter lot to the Staten Island Advance. "Football became a second thought at that point," Barber said. "The Meadowlands was a commuter parking lot, and there were cars that never left. Those people had passed away."

The film and eyewitness accounts showed that it was true that the picture showed 9/11 victims' cars in the commuter lot at the old Giants Stadium. Hours after this article was originally published on Dec. 2, 2021, we changed the rating from "Research In Progress" to "True."

On the evening of Dec. 2, 2021, the rating for this article was updated from "Research In Progress" to "True" after we found that the picture was not a photograph, but rather a screenshot from an NFL Films documentary.